You are here: Home » Prophecies » Trib-Now Interview (Prepare for the Fight) 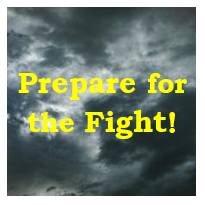 This interview was given August 23, 2020, on Tribulation-Now Radio.  I discuss what the Lord’s showing is just ahead; that His Saint’s have a very short window to prepare; and the ONLY WAY to be prepared!

The Holy Spirit has been telling me repeatedly that this is the calm before the storm.

Trump said the same thing back in 2017. We’re almost there…

The warnings have diminished. Its time for the events to intensify and accelerate.

All I can say is thank you.

Anyone know if there’s a transcript of this anywhere?

I don’t see a transcript at that link, am I missing it?

If the vaccine is a precurser to the mark of the beast, is it wrong to try to warn our loved ones? This has grieved my heart, for the salvation of my lost loved ones.

Although there is a lot of evidence the vaccines now being developed will be loaded with bad stuff and should be avoided, they don’t fit the scriptural description of the mark of the beast. So I if I was going to warn an unbeliever, I would focus on the specific facts related to this vaccine, including RNA replication and hydrogel that contains nanotechnology, and would keep any mention of the mark of the beast as a separate event coming later.

In addition to that, if they’re Believers then we absolutely should warn them about how most vaccines contain fetal cell lines from aborted babies. Every Christian should have a problem with that.

Sound advice James, thanks for your comment on this. I feel the same exact way. We need to keep absolute truth, IE. scripture, separate from conjecture otherwise we risk diluting and polluting God’s Word even if unintentionally.

Diana, this word is desperately needed in the church today.

The land must be cleansed.

Excellent word – message from the Lord thru Diana ..have re listened to this as I got so much out of Dianas message. It was uplifting & helpful joined in the prayers…. being interviewed by John on Tribulation now it was great to hear a bit of laughter & dialogue between them both & a bit of a chuckle also_ John had a great testimony re what he is going thru..

Also, I belive the wisdom of ALMIGHTY GOD (the wisdom which says, “a wise man winneth souls,” will allow the side effects to manifest in some unbelievers to bring forth the COMPLETE DNA HEALING POWER OF JESUS CHRIST and to save more souls and also alert ALL souls to the danger of DNA manipulation which will be FULL FORCE with the mark of the beast after first fruits are gone