You are here: Home » News » Jesuit Agendas » Artificial Intelligence » Transhumanism is the Goal; Elimination of Humans that are 100% God’s Creation
Share this post: 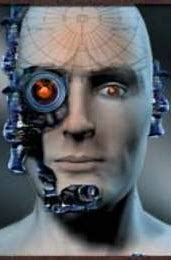 Predictive Programming in our entertainment (movies, books & music) have for decades sent the message that it is no longer enough to “just be human” & that in order to compete in the future with artificial intelligence (AI) & robots, humans will need to be “enhanced” with technology.

Consider how this message of NOT being enough as you are directly conflicts with Psalm 139:13-14 KJV:
13 For thou hast possessed my reins: thou hast covered me in my mother’s womb.
14 I will praise thee; for I am fearfully and wonderfully made: marvellous are thy works; and that my soul knoweth right well.

Youtube Channel, Nicholson1968, who is a Christian, has many excellent videos on transhumanism if you are not familiar with this topic. Here is one of his latest videos, “Back2Human”

Art of War Strategy – “Know Thy Enemy”. The Enemy is both a physical Enemy & a spiritual Enemy.

Ephesians 6:12 KJV – For we wrestle not against flesh and blood, but against principalities, against powers, against the rulers of the darkness of this world, against spiritual wickedness in high places.

The Devil’s greatest tricks was to get people to believe he does not exist.

“I am Jesus Christ” Video Game – pure blasphemy where the gamer is Jesus Christ & walks around & heals people for points. Effort to twist who Jesus Christ was to make Jesus Christ seem like a fictional character like Santa Claus.

“Disintegration” Video Game – “In Earth’s near future, climate extremes, overpopulation, food shortages, and a global pandemic led to nations collapsing and humankind on the brink of extinction. Scientists adopted a means in which the human brain was removed and surgically encased into a robotic armature, a process known as Integration. It was meant to be a temporary solution to an unavoidable crisis. It was a good thing for decades, allowing humans to survive. But some of the Integrated saw this new form as the future of humanity. With no desire to reverse the process, the post-humanist integrated stratified, calling themselves the Rayonne. Global war soon erupted, and Rayonne forces now seek to hunt down any remaining humans, forcing their integration and destroying those who don’t share their views.”.

A mandatory vaccine may be coming. The world’s most powerful people study the reactions of the public to map out their strategies to reach their goals.

Once this is done, the Elites can 1) control our thoughts, beliefs & actions. 2) make these hybrids into slaves/serfs 3) create a patent on each person as a “genetically-modified” creation (no longer 100% human and with none of our God-given Rights!). Celeste Solum discusses this plan to make humans into GMOs in multiple videos.

Through the creation of man-made virus (MERS/Coronavirus), people will demand a vaccine. Why would the most powerful people want the masses demanding a vaccine? Because there is something in the vaccine that you want people to have in their body. What is in the vaccine? A MANIPULATOR/MODIFIER to people’s DNA!

Nanotechnology coated with gold. A third strand of DNA is imported into a person’s body through a vaccine. The Elites know they can not force people to take the vaccine because they would rebel but instead they create the problem and then the solution is people demanding a vaccine that accomplishes the goal of the Elite (3rd strand of DNA)!

Humans that receive this third strand of DNA become a “hybrid”. The insidious part is that once a person is injected, almost immediately the person’s DNA changes. They do not realize they have lost control of their thoughts & their ability to think on their own & that they are being affected on a moral, ethical & legal level.

The powerful people can turn these hybrids into a class of slaves to serve the Elites. These slaves become the labor for the Elites that want immortality. These hybrids achieve a hive mentality that are serving the Queen – the Elites class!

Merging with technology is NOT a good thing! Nicholson has been warning about transhumanism since 1999.

Nicholson studied multiple religions and ONLY Christianity (the Bible) explains the times we are in correctly.

2 Thessalonians 2:4 KJV – Who opposeth and exalteth himself above all that is called God, or that is worshipped; so that he as God sitteth in the temple of God, shewing himself that he is God.

This is what the Enemy wants. What is the “temple of God”?

1 Corinthians 3:16 KJV – Know ye not that ye are the temple of God, and that the Spirit of God dwelleth in you?

The Enemy wants to set himself up in our bodies! In the bodies of all humans.

Hebrews 9:27 KJV – And as it is appointed unto men once to die, but after this the judgment:

You come as a man, you die as a man. You believe on Jesus Christ and you overcome death by getting your spiritual body in the next stage of our development. Our physical body is only one of the stages, like a caterpillar & a butterfly

Keep the faith! Believe on Jesus Christ! He returns to battle what is going on now.

Our job is to tell people of the Kingdom to come, who He is, what He is about & what He has shown us.

Excerpt – “Ultimately, the company’s goal is to create a direct link between the brain and a computer. They will be able to do this by using a ‘sewing machine-like’ device that will ‘sew’ threads to the implanted brain chip, which would then connect to a single USB-C cable that enables ‘full-bandwidth data streaming’ to the brain….

Furthermore, the company’s CEO plans to enhance the chip’s capabilities and allow mankind to compete with artificial intelligence.

Nevertheless, their first iterations of the Neuralink chip is to help people with neurological issues and brain disorders like Parkinson’s and depression and anxiety…

Besides the chip’s capability to stream music straight to our brain, it apparently could help regulate hormone levels of the wearer and provide ‘enhanced abilities,’ such as relief from anxiety and greater reasoning skills.

Through the mysterious chip, Musk believes humanity could overcome AI.

He had always been vocal about his fear that humanity could be wiped out or overcome by artificial intelligence in a theory known as the Singularity.“

If you have not kept up with all the advances of robots in our society that are taking jobs from humans, here are just a few articles

This is an ongoing, updated blog of articles with scientific work related to AI & Robotics.

Here are just a few of the advancements:

Article – “The future is cyborg: Two-thirds of Western Europeans would consider ‘upgrading’ their bodies with technology – but Brits are less keen than the Spanish and Portuguese”

“Two-thirds of Western Europeans would consider augmenting their bodies with technology if it improved their lives — and especially their health — a study found.

Commissioned by Moscow-based cybersecurity firm Kaspersky, a survey found that 63 per cent of people on average would be interested in getting an ‘upgrade’ or two.

However, results varied from country-to-country, with only 25 percent of Britons interested in augmentation compared to 60 per cent in Portugal and Spain.”

The push by the Globalists & the media to “normalize” transhumanism.

With all the new technology so advanced : such as 5 G = 5 th generation radio frequencies that enable mobile phones smart phones & all devices to function on faster processing ability Smart electricity metres, smart H2o meters + AI – Internet etc, Whether it’s your car , phone or refrigerator all electricity will be on a Smart grid ..a type of Matrix globally. 5 G will be 10x faster than 4G …5 G can be dangerous for the human body; ..? causes cell poisoning so some say increasing toxic levels in the body : radiation to the bodies cells , so they react to kick out the toxins in the form of disease …similar to this C. Virus …many in China just dropped dead in the street. seen on TV.- In early days of the so called virus before virus seen outside of China . Around their Chinese New Year in Feb 2020 .

The Global elites do not want to roll back the technology of 5 G – as it would spoil their nefarious agendas. Electrification of the universe thru 5 G sattelites , towers etc..to weaken a persons body and more susceptible to disease : virus etc… Huawei rolled out 5G in China then 2) Spain 3) Italy- fatalities in densely populated areas with 5 G & many elderly susceptible. 5 G the only network with the speed to handle the future of where they want to take us with the Internet, -AI and new digital global currency – block chain & AI. TO TRACK ALL OUR MOVEMENTS, ,JOURNEYS, BANKING TRANSACTIONS, IDENTITY ETC.

Vaccines New Order; with a tracking device to RFID chip inserted @ the same time as vaccine. So they could say you can only travel: work if you have had the vaccine. New digital currency ; globally new era of mark of beast Shutting Global economies down thru disruption to society ,education etc to bring in new order / new system to control way people live.

But our God! : Heavenly Father knows all things… Beginning & end… We as believers in Jesus & The Father will only have his mark and seal on our bodies thru the Holy Spirit ; to be truly redeemed by the Blood of the Lamb… And set apart For Him only.

you know what i find strange is i havent heard one pastor denounce covid vaccine. Even if it not the mark, it willl alter ones DNA and that should be enough for pastors to speak against it.. My suspicion is pastors are silent as most work for the government not GOD

Chuck Baldwin, JD Fraraj and a few more are very much against the vaccine, there’s a few upright shepherds that are speaking out