We don’t hear much in the news about the tens of thousands of people dying each year from the flu, so most of us don’t realize how deadly it is. As shown in the chart below, total annual worldwide flu deaths consistently exceeded 50,000 people in 2017, 2018 and again in 2019, but strangely dropped to zero starting in early 2020 and have remained there ever since. (Source: World Health Organization) 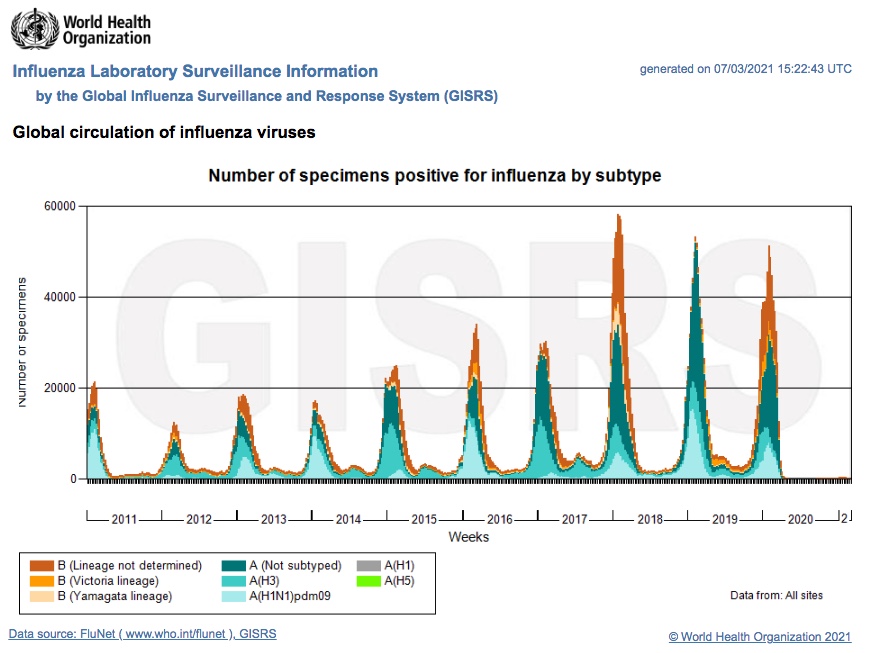 As shown on the chart, there was another big spike during the 2019-2020 flu season with over 50,000 deaths, but then it dropped all the way to zero during the 2020-2021 flu season, which I find interesting because early 2020 is when the first significant numbers of COVID-19 deaths were reported. Never before in the history of flu reporting (started in 1995) has it ever dropped to zero, but suddenly and without any explanation it happened at the same time as COVID-19 deaths started ramping up. And the data clearly shows flu deaths had been increasing at an alarming rate over the past decade, so how could it have suddenly dropped to zero?

Doesn’t this look suspicious? Are we being lied to with phony COVID-19 death totals, purposely inflated to strike fear in us? This is just one of many facts revealing why I believe the answer is ABSOLUTELY YES.

Anyone can run the reports by visiting the Flunet page of the World Health Organization.

Interesting that the page this info came from now no longer exists on the WHO site. It now says ‘We have revamped our website.The link you selected is no longer active. We apologize for the inconvenience. To find similar material or an updated version of the page, please visit the resources below.’
And then when I went to the resources and found influenza it just looped back to the same message.

I think they they took their eye off the Influenza ball as there was some big shit going down!! WHO published guidelines for nations not to stop monitoring Influenza but hay ho. Of course there was Influenza deaths. Less, probably cause most people were in lockdown.

Hi. I am unable to find ANY statistics on the New Zealand influenza deaths in 2019, 2020 and 2021. This certainly makes me very suspicious about what the heck is going on with COVID-19. If anyone here does have a link to any data on the influenza deaths in NZ from 2019 to 2021, please let me know so I can have a look.

Hi, I tried pulling up the chart for myself on the WHO website, but I can’t see the option to extend the year before 2020, so it only gives me a comparison of 2020-2021. Can you give instructions on how you made the chart show all the previous years as well? (I wouldn’t be surprised if the WHO pulled the data, but I just want to make sure I’m not missing anything silly)

Please click the WHO link in the first paragraph of this post or copy and paste this into your browser:

I just visited that page and all the data is still there. You have to select the date range and then click Display Report.

Called a friend who works at the same place as me, just in another department. Out of the 100 or so that have been vaccinated, 10 that he knows of are having adverse effects. One having full body tremors, one paralysis of his arm, the other eight: severe bruising. Will update as I find out more.

Thanks Matt NZ,
Time for the these guys to engage a high profile NZ compensation lawyer . This might be
The only way to stop this insanity,
God bless you
Philip

Pure evil: The government has granted the Covid-19 vaccine suppliers Pfizer and BioNTech indemnity from any claims that may arise from use of the vaccine.

Thanks for the update MattNZ. So amazing that the whole world is blind to the adverse effects happening consistently everywhere. No wonder they can’t see the longer term effects. I’m so glad you’re standing firm.

Matt-NZ. reading the comments Found video .Titled Its here ,First Court Case Against Mandatory Vaccination Attorney Interview. 8th March 2021 (By Spiro Skouras Activist post.com) .saw this .as I was looking @ a video link to the post on Vatican council for Inclusive capitalism (by Expat Gal) ..I saw this video :

Thanks Anne,
That was my strategy. Sue the Employer (Australian or NZ Employer/Govt) for forcing a vaccine on an employee. I think there is a clause in the Nuremberg Code that prevents forced medical intervention on an individual by a Government or an Organisation.
regards
Phil
I’ll be praying this case is successful and it sets a Worldwide precedent. That is, that Mandatory vaccination is UNLAWFUL. We are NOT LAB RATS.

I’ll take a look, Thank you Anne. Informed Consent is a major portion of the Nuremburg code. We are not being given all the information intentionally.

Got a call from my boss 30 min ago asking me if I had been telling people not to take the Covid 19 Vaccine. I said yes. I have been officially told to stop telling people not to take it. I like my boss, he does a good job and looks out for us but this came down from way above him so he sounded like he had been put in a wine press. From the sounds of things if I continue I will have to look for another job (will likely have to do that anyway when the “voluntary” Vax becomes “Mandatory”). I had merely been saying that it’s new Technology / MRNA and we don’t know the long-term effects & showing anyone interested the VAERS Cv19 vax adverse reactions… apparently a little TOO much truth.

Matt
Interesting if your Union will back your right not to be Vaxed!

I’m not taking it under any circumstances probably won’t get union support, they worship Jacinda. I can no longer tell people not to take it. Nothing here in the media about downsides to the vax. Its all roses, puppy dogs and sunshine.. Besides as I’m repeatedly told by those I warn “the government said it’s safe!” Sheep! Government’s have also told people gas Chambers were showers.

MattNZ, So glad you’re standing your ground. It’s not going to be easy for vax refusers. I imagine they’ll make it as difficult as they possibly can. I’m not getting it either.

Hey MattNZ, I just read a quote recently along the lines of
“I’m not wasting anymore time trying to wake up the sheep, I’m now here to encourage other lions”
I’m sure you get the gist of it…..it ‘seems’ the Canadian sheep are in total herd mode, but I’ll be there when they start to wake up…..in the mean time I do really enjoy encouraging other lions now and running with them. Bless you brother.

I am so sorry mattNZ! That is a terrible position to be in. I admire your fortitude when your job is on the line.

James we have it here in Sout Africa too. Suddenly you don’t hear of any other death results and stats. We sure are being lied too. I have no doubt.

And miraculously no one is dying of strokes, cancer, heart disease etc… only covid. What a bunch of baloney.

Jun 27, 2012 (CIDRAP News) – Working with admittedly sparse data, a research team led by the US Centers for Disease Control and Prevention (CDC) has estimated the global death toll from the 2009 H1N1 influenza pandemic at more than 284,000, about 15 times the number of laboratory-confirmed cases. The World Health Organization (WHO) has put the number of deaths from confirmed 2009 H1N1 flu at a minimum of 18,449, but that number is regarded as well below the true total, mainly because many people who die of flu-related causes are not tested for the disease.

Yes, one of the arguments I’ve used with friends and family to prove “the Lie” and their immediate response is “Of course the flu deaths are way down because of the lockdowns, no flu is being spread around.” Then I would say then how is the covid being so widely spread around? There is no room for rational thought when a person chooses to be ignorant and to deny observable facts, but instead to believe the cr%p being shoveled at them from every direction.

I had this exact exchange with a nurse last weekend.

Me: “Why has flu gone down to no cases, after decades of hospitals being overrun with flu?”

Nurse: “Because people are masking and social distancing!”

Me: “Okay, then why hasn’t that prevented covid?”

Nurse: “Because the people who are catching covid aren’t wearing masks and social distancing!”

Me: “Then why aren’t they getting the flu?”

Nurse: “Because covid is covid!”

This conversation ended with the Nurse becoming very angry when I said that covid receives funding through the CARES act, while flu does not. She ended the conversation. I was very astonished that a nurse was utterly ignorant about PCR tests, false positives associated with high-PCR tests, and funding. I also was very surprised she did not see the logic problem with her assertions about masks and social distancing.