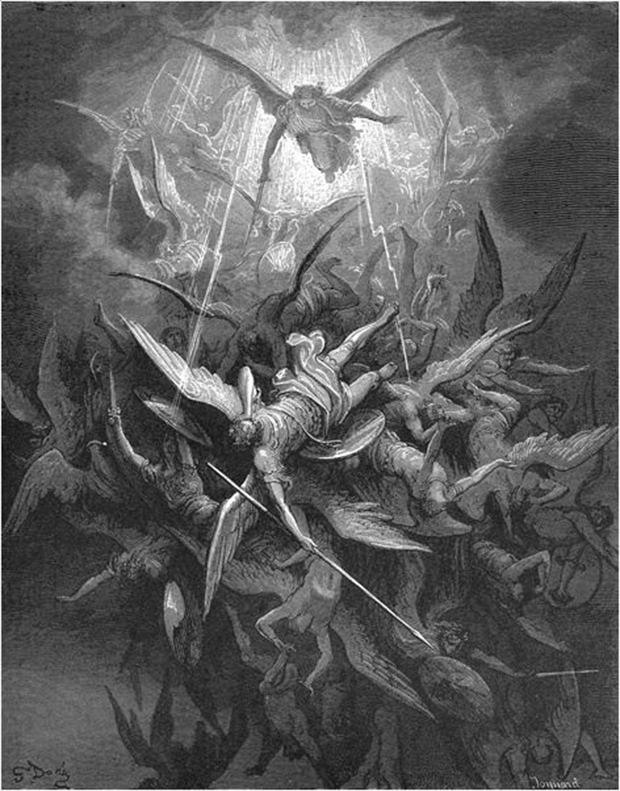 In the last few weeks, I have received three different dreams/visions that I believe all reveal an increase of demonic activity is upon us, much like satan’s angels, from Revelation 12, falling to the earth.

In a dream on September 30, 2017, I walked into a large room, like a conference hall in a hotel. There were many people, both male and female, walking around. They were wearing black and dark navy blue suits and were very business like. The room had no windows and there was no furniture, no speaker, no agenda, and no program, just a room filled with people walking around with blank looks in their eyes. It was downloaded into my spirit that they were REALTORS.

I then noticed, on the side of the back wall was a HUGE map of the world, which seemed to have significant importance to these people. As I stopped to watch them, I noticed they were not talking to each other, and they seemed very anxious, as if they were waiting to receive their appointed assignments, like caged animals just waiting to escape. I then awoke.

The LORD gave me the following interpretation. In the physical world, realtors are a business occupation. I believe the HOLY SPIRIT was showing me in this dream they represented the fallen ones, demonic spirits, who are just waiting to be released to their different assignments (homes) around the world. They were portrayed as realtors because they were looking for homes to dwell in, which would become their hosts. Their appearance as realtors was just a metaphor and nothing else, so if you’re a realtor, please take no offense!

This reminded me of Revelation 12 where the fallen angels are thrown down to earth along with satan after the great war in heaven:

I received this dream seven days after what I believe was the fulfillment of the Revelation 12 sign in the heavens, which appeared on September 23, 2017. I believe we are now in the time when this war in heaven occurs and the angels are thrown down to earth. In this dream, they were waiting anxiously for this to happen, awaiting their assignments on where to go on the earth. I also believe it shows how demons are waiting for ‘open doors’ that people unintentionally give them, so they can enter in through oppression or possession.

I find the date interesting, Friday the 13th. I knew it had to do with what goats represent: Baal, Behemoth, and satan himself. I wasn’t so sure what the 24 meant until I looked it up in the WORD. I found there are 24 ELDERS sitting around GOD worshiping HIM, whom I believe are part of GOD’s heavenly council, which I saw in a different vision.

The twenty-four elders who sat before God on their thrones fell on their faces and worshiped God. (Revelation 11:16)

The number 24 can represent government and that is exactly what I believe this word I received means, Satan setting up his hierarchy, his government here on earth, imitating GOD with his own 24 elders.

This ties in with the dream above about the fallen angels coming and waiting for their assignments. Satan’s kingdom is organized, hierarchical, and legalistic.

I believe that the LORD was showing me that we are approaching these days of evil fallen angels that are coming from the sky. I believe the Revelation 12 sign, which appeared in the sky on September 23, pointed to these upcoming days.

It is important for believers in Christ to remain awake and vigilant, so we are not deceived by these coming events. They might not come in with a big “BANG,” but instead cloaked in deception, sneakiness and lies, similar to the ‘frog in the pot’ allegory. We are already seeing this evil seeping in through attacks on America’s children. The ‘Drag Queens Story Hour’ in the library system is just one example. (Source: theblaze.com)

The GOOD NEWS is that JESUS has already defeated the enemy by the cross and the victory is ours for the taking!

You are of God, little children, and have overcome them, because He who is in you is greater than he who is in the world. (1 John 4:4)

But thanks be to God, who gives us the victory through our Lord Jesus Christ. (1 Corinthians 15:57)

JESUS has given His disciples ALL POWER against satan and his minions, so we just need to appropriate it and claim HIS WORD!

“Behold, I give you the authority to trample on serpents and scorpions, and over all the power of the enemy, and nothing shall by any means hurt you.” (Luke 10:19)

This is the time for the saints of GOD to put on the full armor of GOD and be ready for the battle at hand because the battle in the heavens is coming down to earth and we must be prepared.

There is no fear for those who belong to CHRIST JESUS because we know the battle is the LORD’s and, just like JESUS, we will be anointed with power:

You will not need to fight in this battle. Position yourselves, stand still and see the salvation of the LORD, who is with you, O Judah and Jerusalem!’ Do not fear or be dismayed; tomorrow go out against them, for the LORD is with you. (2 Chronicles 20:7)

How God anointed Jesus of Nazareth with the Holy Spirit and with power, who went about doing good and healing all who were oppressed by the devil, for God was with Him. (Acts 10:38)

Another great spiritual weapon we must not forget is that we OVERCOME the enemy through the BLOOD OF JESUS and through the WORD OF OUR TESTIMONY:

And they overcame him by the blood of the Lamb and by the word of their testimony, and they did not love their lives to the death. (Revelation 12:11)

So, dear saints, as the spiritual warfare is increasing, our LORD has given us all we need to become victorious and more than conquerors!

No, in all these things we are more than conquerors through him who loved us. For I am convinced that neither death nor life, neither angels nor demons, neither the present nor the future, nor any powers. (Romans 8:37-38)

I shared these same dreams and words in the following 10-minute video.

I have in My diary for the same period several simular dreams.
1. Saw demon crash his hand through a building. It was a large building here in Norway which is built on an area that was almost the site of norways first mosque. I saw 3 angels who were fighting him hard, but he was allowed to crush the building (they didn’t/couldn’t completely stop him).
2. People falling from heaven (the sky) all over dressed in work clothes (suits, both men and women) all over the world.
3. Dream with VERY deceptive creature with a terrible lust/sly deceptive power, even to the point of making people completely forget their loved ones. He was disguised as a mentally challenged man (as to promt sympathy/innocence) and had a snakes tongue.
4. Another dream where similar deceptive spirit, also quite sensual/lust was abound, again, deceiving and making people forget their loved ones; was called by name “Sheeba” was what I wrote. Possibly Shiva (?), but write Sheeba.

Sorry, must add. In the first dream there, I heard several sayings in Esperanto (I had to look them up!) and they were “Christ would invoke a song” (I sang in spirit), “sanktus espiritus”, Holy Spirit. These were heard while the angels were fighting. Then After the building fell the Angels chained the large beast and threw it underground to the center of the earth and cried “Kristus finitus adore” (Christ ended His love) and Sanktus adore (Holy worship). I had no time frame as to if this was an event to actually happen or if it was only spiritual but the feeling was it was possible it was a warning/prophesy to Norway/Oslo.

P B Shelly,considered the doyen of English Romantic Poetry wrote ” If winter comes can spring be far behind “. If these evil hordes come, can our Lord’s mighty army be far behind.

I forgot to add that God is set to visit my country (Nigeria) in a mantle transferring program by Reinhard Bonnke next month 8-12 .I believe many captives will be freed and new oils released etc in this program. Thank God for His mercy

Thanks for this revelation, mine own research has led me to see my generation are falling away and embracing the occult. Now I can see why people will continue practising witchcraft even during the great tribulation after the wrath of God is released on earth. I pray for the fullness of God power, armour and faith in God for the strange days ahead. No wonder Job cursed the day he was born when wickedness descended upon him.. Job. 3:1-10…It’s my prayer that the Light of God will arise for us out of this great darkness and God in His great mercy will hold onto us that we won’t fall away as the earth opens to reveal the abyss and demons jump from their dimensions to ours in Jesus name, Amen. I plead the blood of Jesus over this comment in Jesus name,amen.

Jason A did a compilation video of demonic influences/manifestations increasing worldwide. https://m.youtube.com/watch?v=kmHNRaMKRnQ

Full armor of God is critical, each & every day, to fend off these attacks. ?