Cardinal Gerhard Ludwig Mueller warned that globalists want to create “a new man in their own image and likeness, that has nothing to do with democracy.”

A senior German Cardinal has warned that the likes of Bill Gates, George Soros and Davos Economic Forum head Klaus Schwab are using the coronavirus pandemic to force the world under “total control” of globalist “super-rich elites.”

Cardinal Gerhard Ludwig Mueller, who also serves as a high ranking judge at the Vatican court, made the comments during an interview with Austria’s St. Boniface Institute.

Mueller urged that “People, who sit on the throne of their wealth,” are seizing an “opportunity to push through their agenda.”

The Cardinal added that the pandemic has led to “chaos” and “turmoil” in part due to elites wanting to “snatch an opportunity to bring people in line” via a global “surveillance state”.

Mueller also stated that globalists are making efforts to bring “a new man” into the world, created “in their own image and likeness,” warning “That has nothing to do with democracy.”

“[they] proclaim loudly that this is an opportunity to push their agenda, an agenda based on fraud, specifically the opinion that we can use modern technology to bring forth a new creation […]”
His Eminence Kardinal Müller, former Prefect of the CDF. pic.twitter.com/JSkWWFTSg4

If you use twitter on a computer, you need to change your display language to german. After that you should be able to see a “cc” button on the bottom right corner of the video to activate subtitles. pic.twitter.com/zFJJte6IrJ

Today we got a lot of requests for our Interview with his Eminence Cardinal Müller and many news outlets are reporting on the clip that we posted.
We are pleased to see the rising interest for catholic commentary on the current crisis. The full interview will be released soon.

The German media immediately dismissed the Cardinal’s comments as “conspiracy theories,” with Der Spiegel magazine also suggesting that his comments could be anti-semitic.

Mueller responded to the German news agency DPA in an email stating that it is wrong to suggest that anyone who “criticizes the financial elite … is automatically on the wrong side,” and further urged that “super-rich elites in various countries” are exerting an “illegitimate influence” over the people of the planet.

Mueller is not the first prominent figure in the Catholic Church to warn about the dark objectives behind the Great Reset.

Cardinal Raymond Burke, one of the most powerful Catholics in the United States, gave a homily in which he savaged “secular forces” who want to “make us slaves to their godless and murderous agenda.”

“Then there is the mysterious Wuhan virus about whose nature and prevention the mass media daily give us conflicting information,” said Burke.

“What is clear, however, is that it has been used by certain forces, inimical to families and to the freedom of nations, to advance their evil agenda. These forces tell us that we are now the subjects of the so-called ‘Great Reset,’ the ‘new normal,’ which is dictated to us by their manipulation of citizens and nations through ignorance and fear.” [emphasis added]

The Cardinal, who sits on the Church’s Supreme Tribunal of the Apostolic Signatura, the highest judicial authority in the Catholic Church, also slammed the United States’ fealty to China as a dangerous threat to Christian identity in America.

“To attain economic gains, we as a nation have permitted ourselves to become dependent upon the Chinese Communist Party, an ideology totally opposed to the Christian foundations upon which families and our nation remain safe and prosper,” he said.

Furthermore, we highlighted last November, Archbishop Carlo Maria Viganò wrote an open letter to President Trump claiming that the COVID-19 pandemic is part of a plot to impose a “health dictatorship.”

“We see heads of nations and religious leaders pandering to this suicide of Western culture and its Christian soul, while the fundamental rights of citizens and believers are denied in the name of a health emergency that is revealing itself more and more fully as instrumental to the establishment of an inhuman faceless tyranny,” wrote Viganò.

He added that The Great Reset sought to inflict “the imposition of liberticidal measures, hidden behind tempting promises of ensuring a universal income and cancelling individual debt.”

Here’s a Very Detailed Explanation of the Great Reset and the New World Order.

Catholic Cardinal Robert Sarah also recently warned that Christianity is on the decline and western society is “lost” because “if we are cut from God, we are lost and God is silent.”

The Cardinal also cautioned that “western civilization is in a profound state of decadence and ruin” due to people’s obsession with materialism and that the situation is similar to right before the collapse of the Roman Empire.

“The elites care for nothing but increasing the luxury of their daily lives, and the people have been anaesthetized by every more vulgar entertainments,” said Sarah.

“GLOBAL TAKEOVER: EVERY WORD HE STATED IS TRUE, ONLY THIS RUNS INCOMPREHENSIBLY DEEP”

May 2020 – “THIS IS AN EXAMPLE OF WHAT IS TO BE EXPECTED IN THE FUTURE WHEN VOLUNTARY QUARANTINE TURNS TO MANDATORY QUARANTINE AND VACCINES!”

I had my camper (I’m a travel nurse) hauled to my Mom’s house & the guy who did it shared a story with me. We were just chatting about the mark of the Beast & Gates’ agenda. He recently hauled a boat to NYC for a customer. Right after dropping it off, he saw 4 Police cars racing by by..they set out spikes, blew out the tires of this car, dragged the passenger out, handcuffed both his hands and feet & loaded him into one the police cars. The driver was a woman & they did the same to her. One of the officers stopped to talk to him, & he asked about what happened. The officer said the guy they arrested tested positive for covid-19 in the hospital & was running a fever. They put a micro chip in him to track him & he was required to quarantine at the hospital for 2 weeks but left early. So they did all that because he tested positive & didn’t do what they wanted him to do. Because he had the microchip THERE WAS NOWHERE TO HIDE!!

THIS IS REALLY HAPPENING!!

It wouldn’t surprise me if these vaccines they are pushing have microchips in them. Probably one of the reasons they are so hell-bent on all of us lining up for them. SMH…

That’s the Main Agenda behind this so-called Corona Virus, to Vaccinate / Microchip or Depopulate the world’s population, NWO ushering in the End Times & the antichrist.
_____
“BIG PHARMA AND MICROSOFT ARE TEAMING UP IN SOMETHING CALLED THE ‘ID2020 ALLIANCE’ THAT WILL COMBINE VACCINATIONS WITH IMPLANTABLE MICROCHIPS TO CREATE YOUR DIGITAL ID”

“The mRNA COVID Vaccine is NOT a Vaccine”

THE STORY: The new mRNA COVID vaccine deployed by Moderna and Pfizer is not what you think. It’s not a vaccine.

THE IMPLICATIONS: These so-called vaccines are chemical devices that make you sick, operating systems that reprogram your DNA forever, and much more.

NOT a Vaccine: the mRNA COVID vax is a chemical pathogen production device and a technocratic, transhumanistic tool to reprogram you.

Dec. 21, 2021 – “Lines for getting booster shots in Toronto are now snaking around full blocks” (video)

Hundreds of people in long lines have been forming around Toronto, not just for the free rapid antigen tests that have dominated headlines in recent days, but also for the chance to get a COVID-19 booster shot and bolster their immunity as Omicon bears down on the city.

One of the longest, craziest queues happened out front of Morse Street Junior Public School at 180 Carlaw Ave in Leslieville, where lines snaked around the block before the clinic even opened.

“A Global Coup Have Been Carried Out All Over The World…”

‘You’re kidding yourself if you think this is going to end, this is the very beginning of you seeing Canadian society being torn down.’

I hope Canada wake up Sarah, I have not long received my Canadian citizenship (long story). Never even been to Canada and hoping to visit at some point in the future. As my wife who is Japanese and myself remain unvaccinated, not sure how that is going to work? Confident the Lord will make a way though!

The only way of coming into Canada is to be Vaccinated, so we are stuck where God has planted us.. (unless God gives us wings)

Oh I’m coming to Canada one way or another Sarah! May have to wait a while, but I’m coming!

December 21, 2021 – “Army Vet Swarmed by Cops, Arrested and Jailed Over Ordering Food Without a Vax Pass”(Video)

(How many members of the Gestapo does it take to arrest 1 person without a Vax Pass????)

“As a Genetically Modified Organism, you have to have a License to move (Slave Passport)”

If you have consented to the “experimental jab”, it has now integrated into your chromosomes, and you are now not classed as human,, you are now legally classed as a “Genetically Modified Organism”. G.M.O’s require a license to travel or move about, that license comes in the form of the Covid Slave Passport. This was only made possible when the EU relaxed all conditions for Genetically Modified Regulations on the 17.7.2020.

https://www.facebook.com/ade.morris.7/posts/do-not-trust-reuters-fact-check-owned-by-the-rothschilds-as-a-genetically-modifi/10159092598822667/
_____
People who received COVID-19 vaccines are now legally patented and no longer have human rights. This is because a 2013 U.S. Supreme Court ruling in the case of Association for Molecular Pathology v. Myriad Genetics, Inc. said that if a human genome is modified by mRNA vaccines then the genome can be patented.

If You Have Been Vaxed You Are now Owned and Have No More Access To HUMAN RIGHTS.

Supreme Court 2013 – Pathology vs Myriad Genetics, The vaxed can be patented (Owned)

July 21, 2021 – In the US, the Supreme Court has ruled that vaccinated people worldwide are products, patented goods, according to US law, no longer human. 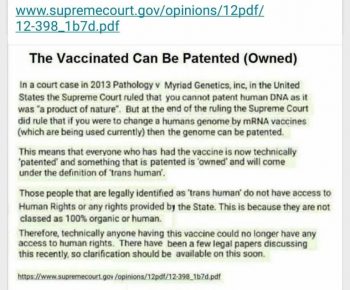 “A Timeline of “The Great Reset” Agenda”

“COVID IS BEING USED AS A COVER TO ENFORCE DIGITAL IDENTITIES”

Melissa Ciummei, a financial investor from Northern Ireland, has serious concerns that injection passports will be used more like data passports to control participation in society.

She believes the passport system was manufactured to bring about a financial reset, replacing our failing fiat currency system. Trillions of dollars are owed to banks and there’s no way to pay it back.

Because passports are crucial for the implementation of this new financial system, mandatory vaccination of all citizens, young and old, will be imperative for the plan to succeed.

Italy: after the mandatory vaccination for all security forces is approved, the military warehouse where the vaccines were stored magically catches fire.

Someone has a back bone after all.. Go Italy!