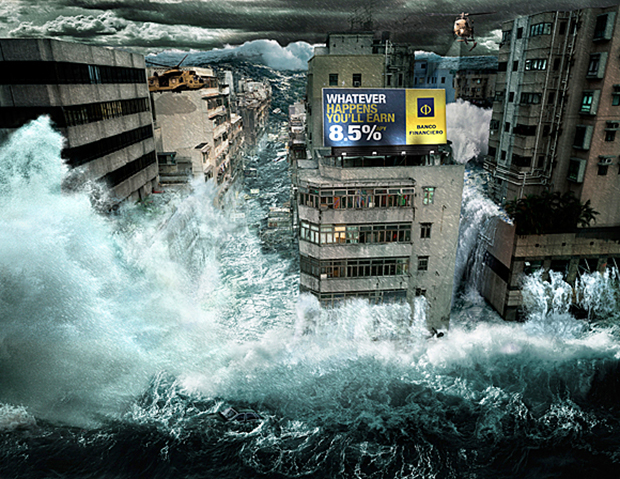 Last week, after waking up early, which is my norm, I suddenly felt a heavy drowsiness come over me and I went to go lay back down in my bed. In times past when this occurred, it’s always been because there was something the Lord wanted to show me in a dream. This time was no different.

I instantly found myself in a high-rise apartment building made of brick. The apartment was laid out like a loft; with an unpolished open floor plan, high ceilings and large picture windows. Outside, I saw many low-rise and high-rise brick buildings, along with houses, lined for several blocks against a shoreline. I did not know which city I was in, but I did understand that it was a coastal city, perhaps somewhere on the east coast or even the Midwest (Chicago), based on the infrastructure of the buildings.

I noticed that my mother was with me, but in another room. She was cooking something on an old cast iron stove.

Suddenly, I heard an explosion that came from outside. I ran over to the window to pinpoint the location. My eyes scaled the city, and then off into the distance of the large body of water (I am calling it this because I’m not sure if it was the Atlantic, the Gulf, or Lake Michigan). Far off, I saw the aftermath of the explosion with a large plume of black smoke rising from the water. It was as if something exploded under the water.

Suddenly, a large tidal wave began to form. I noticed a cruise ship not too far from the plume of smoke. The wave began to pick up the ship and it was headed straight towards the shoreline!

I yelled out to my mother in the next room. “Mom! A tsunami is headed towards us!”

My mother ran towards another window to see for herself. At first I thought perhaps the wave would be minor, but as it drew closer, it grew larger!

I grabbed my mother’s hand as we saw the first row of houses near the shore disappear under the water. The building that we were in was still several blocks away.

I began to cry out loud, “Father, in the name of Jesus, have mercy upon your people…”

I watched as the wall of water maneuvered through the buildings headed right towards us. I scanned the apartment looking for something to hold onto. I kept thinking, “We have to brace for impact.”

The wall of water slammed into our building, but it did not collapse. I watched as cars and debris began to float by. The water continued to rise, nearing our window point.

My mother continued to pray in the spirit, while I cried out loud.

“Lord, I know you have to judge this nation, but I’m still asking you for mercy.”

My voice cracked from the thought of all the lives that were lost. For I knew, many had perished.

Then, I opened my eyes.

Here is a sobering word from Buffy Hamilton:

3 am the Lord woke me up and gave me a lot of information regarding something that is going to take place. It is about something I know nothing about. It kind of shocked me. Ok here it goes.
When the stock market crashes and the value of the dollar is nothing. Government will take away food stamps and will be giving out food boxes to families instead. HE said very specifically ” THEY ARE POISONOUS AND FAMILIES WILL DIE A SLOW AND HORRIBLE DEATH” Some may die quicker than others depending on their health. Then I heard the word “ARSENIC”. I WANT to pray over this. Please stand in agreement with this prayer.

I stand in agreement In The Name of Jesus The Name Above All Names!

I’ve heard other prophets testify of tsunamis coming on both the east and west coasts of America.

I’ve had 7 dreams in the past 24mo of massive tsunami’s 100 – 300 ft high sweeping through the land. They were all different but very detailed and all terrifying. My sister in law (who is not a believer) had the same, was shocked when I heard her dreams and the parallels to mine.

I was waiting for someone to post on Z3 about a tsunami vision/dream so I could post this.

The underwater tsunami Bomb, is something the Russian government leaked in Nov 2015. Mena Lee Grebin vision, appears to be this weapon… Trunews and popular-mechanics both had articles on this device…

“A well-placed nuclear weapon of yield in the range 20 megatons to 50 megatons near a seacoast could certainly couple enough energy to equal the 2011 tsunami, and perhaps much more. Taking advantage of the rising-sea-floor amplification effect, tsunami waves reaching 100 meters [328 feet] in height are possible.”

” mega-bomb would also generate an artificial tsunami that would surge inland, spreading radioactive contamination with the advancing water. To make matters worse there are reports the warhead is “salted” with the radioactive isotope Cobalt-60. Contaminated areas would be off-limits to humanity for up to 100 years.

Kanyon is designed to get around American ballistic missile defenses, primarily the Ground-Based Interceptor missiles based in Alaska and California. Although GBI is meant to counter small numbers of intercontinental ballistic missiles from rogue countries such as Iran and North Korea, Russia wants to make it abundantly clear that it could still penetrate U.S. defenses even if they were scaled up to deal with larger, more powerful nuclear arsenals.”

I have a tendency to take dreams at face value. I personally don’t see anything hidden here. A sub off of our coast could be destroyed or it could be the Russians with that tidal wave nuke they have been advertising for a while now. Thanks for sharing, Mena.

Pat Buchanan: “Mass migration from the Islamic world, seeded with terrorists, is the greatest threat to Europe.” https://www.zerohedge.com/news/2018-08-03/pat-buchanan-asks-would-war-iran-doom-trump Is this the war between the King of the North and the King of the South in Daniel 11:40 out of which the A/C arises?

I have seen a vision/dream of a huge wave comming in from the s.w. and seen i had to hurry up and get the family members in this long building for safety (a large family we have)
Im think it was a warning take cover in the Lord,cuz here it comes…

The tsunami can refer to an economic collapse. An explosion under the water could mean a cause that was hidden in the economy / unexpected cause / element of the economy that economists and investors did not factor in.

I saw dream a month ago. Was not home . Some apartment on high floor very tall building. All the sudden huge noise. Like thunder. I looked and huge wave coming. It was enormous.
I called my husband . Crab his hand and start to pray. I understood we will not survive. Waited for impact. My eyes were closed. It hits us. But when I open my eyes . We were alive. End dream.