You are here: Home » Prophecies » They were climbing into the Mountain of God’s Habitation by faith.
Share this post: 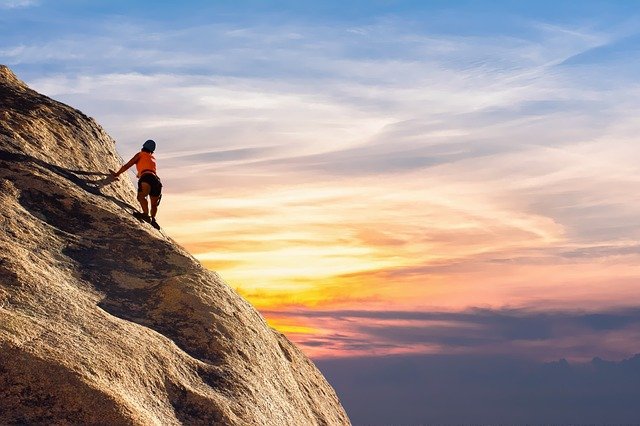 I saw a vision of people slowly and carefully climbing what looked like a very steep rock wall. But I soon realized that it wasn’t a rock wall at all, because in the vision I instantly knew it was the mountain of the Lord.

They thought it was just an ordinary rock mountain which required courage to climb the steep sharp sides. It was popular to climb the mountains in the summer months. I realized that the climbers did not know that they were climbing the Mountain of the Lord’s Habitation in this New Season.

As I looked closer, I could see that the people that were climbing actually had nothing to reach up to above them. There were no footholds or cracks or crevices to put their hands or feet into. Each move they made had to be carefully thought out and I suddenly realized that they were moving upwards in the vision by faith. They were climbing into the Mountain of God’s Habitation by faith.

I watched as one particular man who was struggling with extreme tiredness, and he decided to reach up anyways by sheer determination, and suddenly a small rock appeared on the side of the mountain above him that he could grab onto to pull himself up to. He breathed a sigh of relief and moved up to see the rock that was not there before. He then grew in courage and reached up above himself again and I saw another rock appear and he felt around till he found it, and he raised himself up again. I saw his tiredness leaving him as his faith and courage grew. He smiled and laughed as he realized that he just had to believe they would be there. He began to shout as he continued to reach upwards as he went, and just like before, the small rocks appeared just when he needed to find them.

As I watched, I saw a heavy cloud begin to descend upon the mountain like fog would and soon you couldn’t see the top half of the mountain anymore. Most of the climbers I was watching were below the cloud line. I wondered what they would do, so I looked intently to see what would happen as the climbers now could not see anything above them at all. I heard some climbers begin to yell angrily to each other that the cloud now ruined their view and that they would go back down till it cleared. Others were hesitant to move at all and were frozen where they were. I could see the anticipation on their faces as they tried to decide if they should climb blindly or descend.

I could sense their thoughts of concern for their safety and it was shaking their resolve. I watched as one woman yelled out, “I haven’t gone this far to quit now, let’s go!” She reached upwards feeling for the newly appearing small rock and then I saw her raise herself upwards and she entered into the thick clouds to be seen no more. The others shook their heads at her bold cry, and they all started descending after the others that went down before them.

I heard a voice say, “Many only have the courage to believe when they can see the whole journey ahead of them, or have every move in place before they step out. Faith in Me is dependence upon Me for everything, whether I allow guidance or not. I obeyed My Father without question or doubts. I sought His face for each day’s affairs, and so should you. You will see what you are to do as you continue to look to Me, and as you do I will place the next step before you to reach towards. I am always with you wherever you go.”

“You are coming to the time and place of My Weighty Glory just ahead of you. Many will not want to enter fully in because their carnal souls will be blinded and they will turn around and descend back to what is familiar. Many only want to enter My Presence when they can see ahead and know everything ahead of time to feel safe in their minds, and they forget that true safety is only found within Me. I am your security. I alone will give your soul peace. I am your only source and true support for this Life.”

“Those who desire nothing else but to be with Me will not quit in their journey and their ascent, but will reach towards Me by their faith in Me, and they shall fully enter into Me with great joy. Men desire what they can control and what will make them feel good. I require that you pick up your crosses and follow Me. Teach My People to climb Sue, and not to look back, but to look only unto Me. Only Believe! Step into My Weighty Glory which will soon clothe you heavily! My Reward is with Me! Blessed are those who do not turn away! Blessed are those who press on and contend for the Faith that is being delivered to the overcoming saints!”

Jude 1:3
Beloved, my whole concern was to write to you in regard to our common salvation. [But] I found it necessary and was impelled to write you and urgently appeal to and exhort [you] to contend for the faith which was once for all handed down to the saints [the faith which is that sum of Christian belief which was delivered verbally to the holy people of God].

Jude 1:19-21
19 It is these who are [agitators] setting up distinctions and causing divisions—merely sensual [creatures, carnal, worldly-minded people], devoid of the [Holy] Spirit and destitute of any higher spiritual life.
20 But you, beloved, build yourselves up [founded] on your most holy faith [make progress, rise like an edifice higher and higher], praying in the Holy Spirit;
21 Guard and keep yourselves in the love of God; expect and patiently wait for the mercy of our Lord Jesus Christ (the Messiah)—[which will bring you] unto life eternal.

Isaiah 2:3
And many people shall come and say, Come, let us go up to the mountain of the Lord, to the house of the God of Jacob, that He may teach us His ways and that we may walk in His paths. For out of Zion shall go forth the law and instruction, and the word of the Lord from Jerusalem.

Jeremiah 31:23
Thus says the Lord of hosts, the God of Israel: Once more they shall use these words in the land of Judah and in her cities when I release them from exile: The Lord bless you, O habitation of justice and righteousness, O holy mountain!

Thank you dear sister for the much encouraging word!

My kids. and I just left the Hume Lake Christian camp in the Northern part of California. My daughters best friend Gracie is a camp counselor there. We traveled up the Kings road to the camp. It was truly beautiful and so great to visit with Gracie! There are a bunch of Christian kids at this beautiful camp. They are blessed to have Gracie and the other young adults as a teacher at the camp. Awesome experience. My son Abraham is also moving back to Texas. He is moving in faith to round rock, Texas. It will be so nice to have him closer to home. It’s an answer to prayer! Praise God! God is great and worthy to be praised.