August 25, 2021 more than three thousand hospital workers, sanitation workers, MTA workers, teachers, artists and police rallied at New York’s City Hall to protest the mandate for Covid-19 vaccine, which has been proven unsafe, with many horrific long-term “side-effects” of the vaccine, multiple deaths, deadly, often chronic heart damage,  a “vaccine” which it is feared changes both the dna of the vaccinated, and as the future will demonstrate, may cause sterility.   Yes, this vaccine will reduce the population.

This mandate changes the relationship between the state and the individual, as the slogan “no jab, no job” threatens the livelihood and the lives of workers throughout the United States and all countries mandating a vaccine generating enormous profits for the “Big Pharma,” now guaranteed immunity from liability for the often lethal consequences of the vaccine.  According to British legal authority Francis Hoar, this mandate violates the Nuremberg Code, International Human Rights Law, the Strasbourg European Court of Human Rights, and, of course, the Universal Declaration of Human Rights.

Below are the latest data as at 30 August 2021 (the earlier data appear in the Appendix below):

“Vaccination requirement for certain categories. Vaccinations will be mandated for staff performing certain tasks and/or certain occupational groups at UNHQ whose functions do not allow sufficient management of exposure…Those staff who will be required to be vaccinated must receive the final dose of a vaccine no later than 19 September 2021……All staff at UNHQ in consideration of the need to protect one another will be required to report their vaccination status including through EarthMed with immediate effect.” 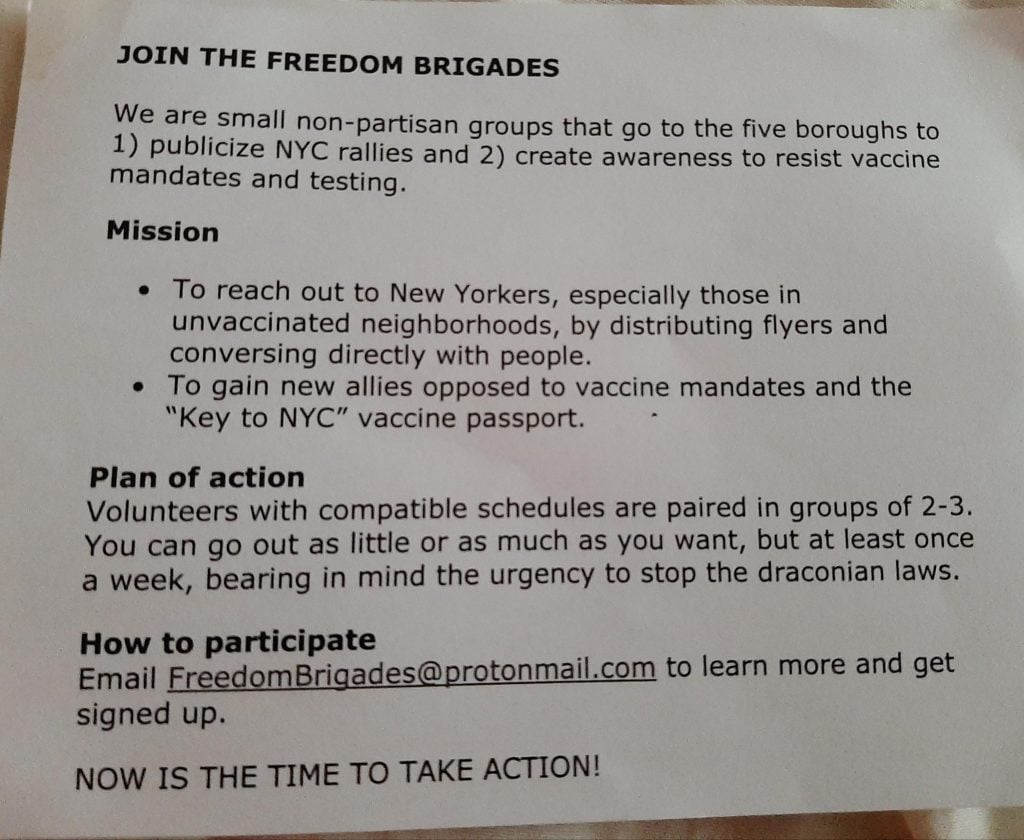 Although there is massive “major” media attempt to obscure the often lethal consequences of this vaccine, the enormous significance of the issues involved is indicated by the fact that every major media outlet in New York City was present at the August 25 demonstration, and quoted and televised many of the protest speeches by New York City teachers, sanitation workers, MTA workers, and other professional  and non-professional employees of public and private organizations.

CBS, NBC, AP, Channel 1, the New York Post, News 4, are among the many media covering this historic protest, the awakening of the public conscience that those citizens and workers upon whom the actual functioning of society depends are infuriated that they are reduced to chattel servitude by the so-called government, and their lives are wantonly put at risk by those government officials whose salaries are paid by the taxes of these workers: teachers, sanitation workers, police, artists, and all those indispensable categories of workers without whom society will collapse. Government workers are public servants, and should not be permitted to dictate the lives of those whom they serve. This is forgotten by these so-called “public servants” who behave like a combination of parasites and dictators. 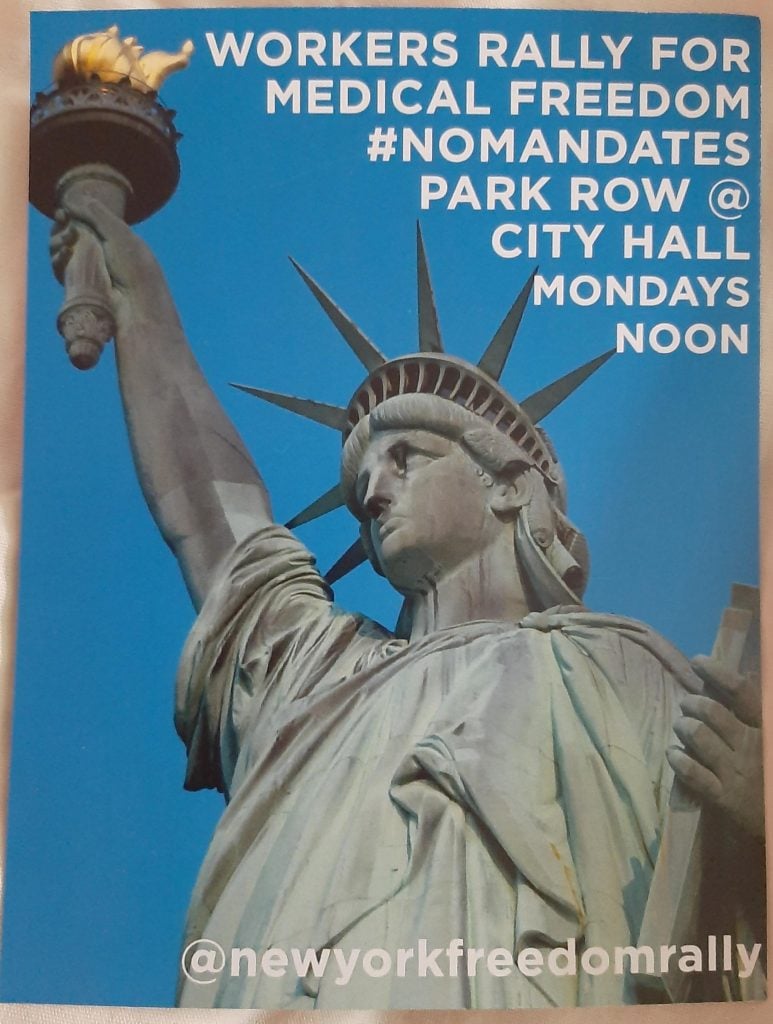 Obscured in this grotesque travesty of government “concern” for public health is the infamous “revolving door,”  the fact that the government agencies obligated to guarantee the safety of this vaccine are often instead, obsequiously guarding the profits of the lucrative pharmaceutical industries, the “big pharma,” signing into laws protections for the profits of “big pharma,” (which provides vast campaign contributions to many of these government workers) and when the government staff of the NIH, FDA, WHO,  and the other alphabet soup of government agencies tasked with protecting the public, (whose taxes pay their salaries), retire from government “service,” they are then guaranteed enormous salaries working for the private pharmaceutical companies.  Obviously, these government staff have huge incentive to ensure the profits of “big pharma,” upon whom their enormous future salaries will depend.

This unconscionable arrangement is not unknown by the public at large, who are now revealing distrust and disgust at the grossly hypocritical motives of this government mandate which risks causing irreparable damage to their lives, and possibly their untimely deaths.

“CBS Cory James she quit her job day ago because she refuses to be forced into getting the vaccine.”

Further discrediting the Mandate requirement which attempts to justify this dictate with the fraudulent argument that the person vaccinated is protecting others, is the absolutely contrary and now acknowledged fact that the spike protein of the vaccination has a “scatter” component which in fact SPREADS the infection to others, and does NOT protect either the vaccinated person from a virulent “break through” of the covid virus infection, but, in fact endangers the healthy people who are not vaccinated, and often infects them with the disease. The vaccine is a super-spreader. But perhaps that is the underlying intention.

On August 23, 2021, The New York Times published an article entitled: “A Hospital Finds an Unlikely Group Opposing Vaccination: ITS Workers”

“New York – Their movement started discreetly—just a handful of people communicating on encrypted apps like WhatsApp and Signal. But in just days, it had ballooned tenfold. And within two weeks, it had turned into a full-blown public protest, with people waving picket signs to denounce efforts to push them to receive coronavirus vaccines. But these were not just any vaccine resisters. They were nurses, medical technicians, infection control officers and other staff who work at a hospital in Statin Island, which has the highest rate of Covid-19 infection of any borough in New York City. Outside Staten Island University Hospital last week, as passing cars and fire trucks honked supportively, employees chanted ‘I am not a lab rat!’”  “Yolanda Mozdzen, 43, a medical assistant, was eager to be one of the first among staff to get the vaccine. But less than five minutes after getting a shot of the Moderna vaccine in December, a rash spread across her body, and she started having a seizure. The adverse reaction triggered an autoimmune disorder, according to a letter from her doctor, and eight months after receiving the vaccine, Mozdzen said she still suffers ailments including short-term memory loss and vertigo. Mozdzen said she had to fight to get properly compensated. ‘I was left penniless,’ she said………..Last week, Mozdzen quit her job.”

On Saturday, August 28, there was a huge peaceful demonstration against the vaccine mandate at Columbus Circle in New York City, and participants marched downtown past Times Square, Herald Square and toward Battery Park.

On August 28  huge peaceful public demonstrations throughout TWO HUNDRED cities in France denounced the vaccine mandate, and demanded autonomy for their body and their lives.

In Berlin on August 28, a huge peaceful demonstration against the vaccine mandate was met with police brutality.

In Athens, an enormous peaceful protest demonstration against the vaccine mandate was met by police violence.

This evening another huge demonstration at City Hall protesting the vaccine mandate is scheduled to be held.

On September 1, 2021 another extremely important rally is scheduled from 11:00AM to 1:00PM at New York Presbyterian Weill Cornell Medical Center, entitled: “Heroes to Zeroes.” This rally, at 1300 York Avenue, East 69 Street @newyorkfreedomrally is extremely significant, because it signals that the outrage against vaccine mandates is reaching the core of the medical establishment, Cornell Medical Center, which trains the most elite medical students and health care professionals in the United States, and is one of the most prestigious medical centers in the world. (Indeed, Anthony Fauci was a graduate of Cornell Medical School).

It indicates that skepticism, the essence of science, is now, we can hope, reaching the hitherto dogmatic attitudes toward Covid, and its so-called “vaccines” about which no adequate testing has been done, nor the often deadly consequences of vaccination studied, or ultimately even known or anticipated.  The United Nations is also, to its shame, guilty of this dogmatic attitude, and recalls the Vatican, 500 years ago when Galileo challenged religious dogma, for which he was threatened to be tortured to death. Shortly before, Giordano Bruno had been burnt alive at the stake by order of the Pope, for contradicting Vatican dogma that the sun revolved around the earth. 500 years later, the Vatican acknowledged the falsity of their dogma. 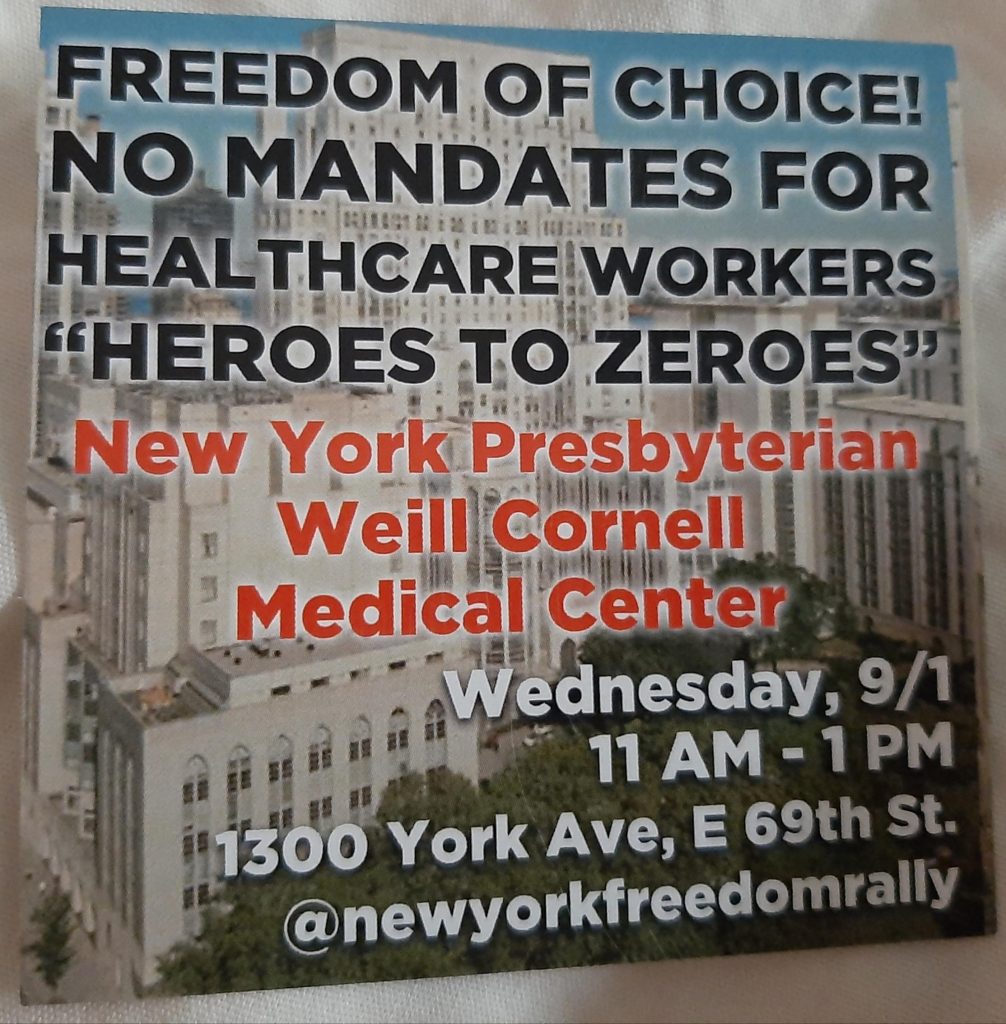 Two days ago two people in Japan died immediately after being vaccinated with the Pfizer vaccine, causing the Japanese government to demand the recall of huge doses of the Pfizer vaccine contaminated with a metal substance, and probably other toxic components. A Ukranian man died of myocarditis immediately after being vaccinated with the Moderna vaccine. And the big pharma companies have been guaranteed and insured from any liability as a result of injury resulting from their vaccines.  They are protected by rulings  by US government agencies, and other organizations, and big pharma cannot be held responsible or liable for anything.

One can only hope that the burgeoning worldwide outrage against vaccine mandates continues and escalates to a point where it is sufficiently powerful to force retreat by the vaccine dictatorship endangering the human species with its ignorance- and arrogance – and greed.

Carla Stea is a Research Associate of the Centre for Research on Globalization (CRG) and Global Research’s Correspondent at UN headquarters, New York.