You are here: Home » Prophecies » The next two-year process will affect us all in our generation.
Share this post: 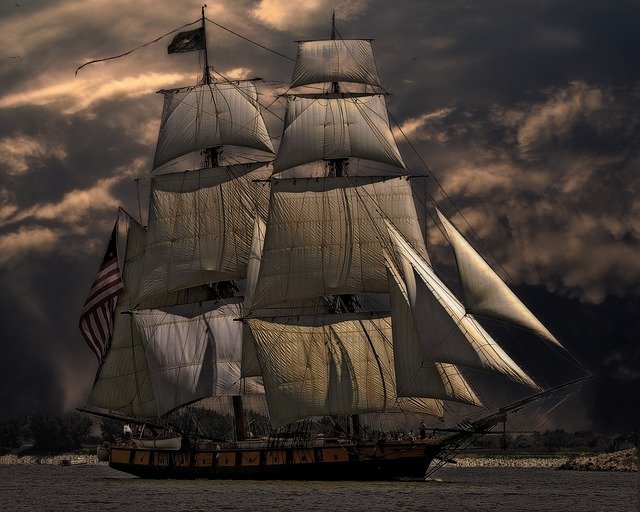 As I looked back and saw the shoreline, I saw unrest, chaos, and upheavals, and heard many people yelling. I looked down and my uniform said I was an admiral and I had a white eagle pinned on my lapel.

I asked the Lord about the people and the chaos on the shore, but He didn’t say anything at first. Then I looked back out to sea and saw 6 other sailing schooners also next to ours going out to sea. I saw the name of our ship was “Iron Horse.”

I understood by pondering this vision that the 7 sailing ships were depicting the 7 remnant churches of our day as mentioned in Revelation chapters 2 and 3. The ships are those who follow the Lord and who have entered into His Rest. Those who have not followed the Lord are going to be shaken by the events of this coming season because they did not know the Lord as they should.

I also saw angels on the shore that were ministering to those who were in turmoil. God has not abandoned anyone. He is showing a clear distinction between those who enter into His Rest and trust in His leadership in the midst of Global changes, and those who will still cling to the world and its works that are being shaken. The Lord is harvesting the nations.

I do not know all of what the two years fully mean as we set sail into the deeper things of the Lord, but our going into the deeper knowledge of Him will be to become more like Him. The next two years will reveal all that He has planned for us all, to prepare us for the future. I also knew that we would return from the high seas, so the next two-year process will affect us all in our generation.

We have two choices as we navigate through this time period. We can either enter God’s rest and allow Him to guide us and change us, or we will be shaken with the rest of the world in the changes coming upon the nations.

Ships are “Leaderships.” God is going to purge His leadership. He is going to have a pure church who can steward the resources of heaven correctly for the harvest ahead of us.

Ships also depict the bringing of the wealth that will be needed to meet the needs of the nations. (See the Ships of Tarshish) Those who are willing to allow the Lord to lead them out into the deep will obtain the wisdom and resources needed to aide in shaping the nations ahead.

In another vision on February 6, 2022, as I was sitting in the back of our church on the floor seeking the Lord, I saw a vision of a huge molten ball of fire about 8 feet in diameter as it came rolling into the church on my right-hand side.

As I turned to see it, I saw people running from it but they could not get away. It ran over them. I saw one man as it ran over him and he came out different than he was before. He was transformed by the fire. I instantly knew that the Spirit of Holiness had come, and the church is going to be purged and those who embrace the fire will be changed.

These are my thoughts on the two encounters. I am sure others will understand what the symbols in these visions mean more than me. It’s time to embrace the Lord, to trust Him, and to follow Him.

Hebrews 4:4-6
4 For in a certain place He has said this about the seventh day: And God rested on the seventh day from all His works.
5 And [they forfeited their part in it, for] in this [passage] He said, They shall not enter My rest.
6 Seeing then that the promise remains over [from past times] for some to enter that rest, and that those who formerly were given the good news about it and the opportunity, failed to appropriate it and did not enter because of disobedience,