You are here: Home » News » Jesuit Agendas » Murders / Assassinations » The Assassination of Malcolm X: The “Actual Assassins” Known to the FBI were Never Brought to Justice

Malcolm X, also known as Hajj Malik El-Shabazz, was assassinated on February 21, 1965 at the Audubon Ballroom in the Washington Heights section of Manhattan in New York City.

There were three people arrested, tried and convicted in his murder yet two men have always maintained that they were not guilty in the crime. 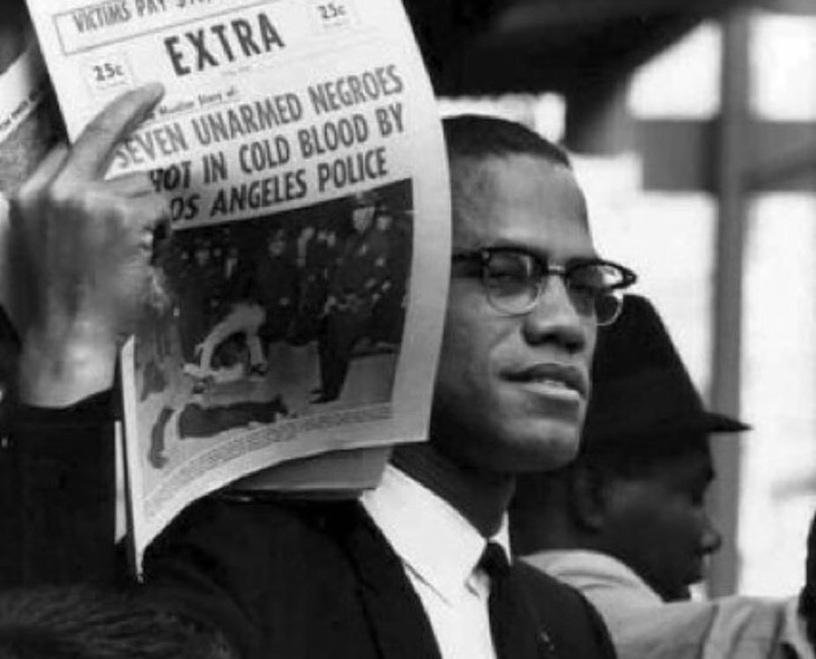 During November 2021, the two defendants who served more than twenty years in prison were exonerated by the prosecutor’s office in New York. The third defendant in the case, Talmadge Hayer, also known as Thomas Hagan (now known as Mujahid Abdul Halim), confessed to the murder of Malcolm X although he refused in the 1966 murder trial to reveal the names of the others involved in the assassination squad.

Later during the early 1980s, Talmadge Hayer (Halim) gave up the names of at least four other people who were involved in the gunning down of Malcolm X in 1965. Halim, was released after serving more than 45 years and the other two, Norman Butler (now known as Muhammad Aziz, who is still alive, and Thomas Johnson (later known as Khalil Islam), who is deceased, were declared by New York prosecutors as not being involved in the actual shooting death of Malcolm X on that fateful day in the winter of 1965.

Although the prosecutors have now declared along with the courts that Butler and Johnson were not in the Audubon Ballroom when Malcolm was killed, the question remains as to why after 56 years the actual assassins were not brought to justice? Apparently, the names of the actual killers who accompanied Hayer were known to the New York police and the Federal Bureau of Investigation (FBI) in the immediate aftermath of the assassination due to informant reports and eyewitness accounts.

The FBI and the New York Police Department through its Bureau of Security Services (BOSS) engaged in consistent surveillance of Malcolm X, the Nation of Islam, the Muslim Mosque, Inc. and the Organization of Afro-American Unity (OAAU), and any other grouping in which Malcolm was associated. At least one BOSS agent was present at the time of the assassination. Gene Roberts had infiltrated the OAAU and routinely reported back to the NYPD about the activities of the organization.

A recent report on the exoneration of Aziz and Islam indicated that several FBI informants were present in the venue where Malcolm X was slain. After the shooting on February 21, 1965, the emergency services did not appear at the scene, necessitating the followers of Malcolm X and the OAAU to go to the hospital located across the street from the Audubon to retrieve a stretcher to transport the revolutionary leader to the emergency room. He was admitted as “John Doe” and a medical spokesperson said they were not able to revive him after sustaining several gunshot wounds to the chest and other areas of his body.

Halim, who was captured at the scene by Malcolm X’s adherents, was released from detention in 2010. He has maintained a low profile since his parole while the actual assassins, which were reported to have been from the Newark Mosque, remained free until their deaths.

Role of the U.S. Government in the Assassination

The real question which was not answered through the exoneration of two of the defendants, is why did the NYPD and the FBI not follow-up on the information provided by their own informants present in the Audubon Ballroom and other witnesses? What is known is that these law-enforcement agencies had conducted widespread surveillance, wiretapping and other forms of spying on Malcolm X and the Nation of Islam both before and after the split between the two entities during late 1963 and early 1964. (See this)

After the establishment of the MMI and the OAAU during the spring and summer of 1964, the tracking of Malcolm X and the NOI continued. From April 1964 to the end of his life, Malcolm X had traveled extensively in Africa, the Middle East and Europe. He had visited over a dozen countries where he met with government leaders, religious figures and grassroots communities in all of the countries where he traveled.

Malcolm X believed during the time, as reflected in his writings and speeches, that he was followed by the intelligence services of the U.S. government. De-classified documents from the U.S. administration reveal that his activities were closely monitored by not only the FBI. The State Department, military intelligence and the Central Intelligence Agency (CIA) were involved in attempts to undermine the efforts of Malcolm X as he sought international support for the liberation struggle of African Americans in the U.S.

A recent article in the New York Times says of the surveillance:

“One F.B.I. report from Sept. 28, 1965, even contains a description of the man whom some experts on the assassination have concluded was probably the assassin who wielded a shotgun — William Bradley. That report gives a description of Mr. Bradley, who was 27 years old at the time, that matches the one given by a defense witness of the shooter who had a shotgun.”

This same report continues by noting that:

“’He had been a lieutenant in the Newark mosque and was known as a ‘strongman’ there,’ the F.B.I. report on Mr. Bradley said. ‘He was a machine gunner in the Marine Corps.’ At least one of the witnesses at the trial was an informant for the F.B.I., according to the documents cited in the motion. One document, dated Feb. 25, 1965, said the bureau had ordered its local offices not to disclose to the New York police the fact that any witnesses were federal informants. In addition, several F.B.I. reports indicated that, on the orders of the agency’s director, J. Edgar Hoover, informants were told not to disclose their relationship with the F.B.I. when talking to the New York police and prosecutors about the murder, according to a footnote in the motion. The Police Department documents include descriptions of undercover detectives having been present in the ballroom, at least one of whom was there at the time of the murder. The report may have been referring to Detective Gene Roberts, an undercover officer who, it later came out, was working as a member of Malcolm X’s security detail.”

These revelations since 1965 indicate clearly that a massive cover-up occurred in the aftermath of the assassination. Even Malcolm X said at his last speech at the Audubon on February 15, that the police were well aware of the criminal operations taking place inside the NOI because they had the organization thoroughly infiltrated. He revealed that several undercover police and informants out of guilt had come to him and confessed that they were working for the authorities.

When Malcolm X was assassinated, his wife, Dr. Betty Shabazz, was expecting twins. They were born months after his death and grew up never knowing their father.

One of the twins, Malikah, was found dead in her Brooklyn apartment on November 22. Police have stated that the death did not appear to be the result of foul play. Malikah Shabazz was found unresponsive by her 24-year-old daughter, Bettih. There has not been any official cause of death announced since the time of her passing.

Malikah, 56, largely lived outside the limelight of the media and public appearances. Several of her other older sisters have become public figures in the theater and literary arenas through speaking engagements, performances and book publishing.

The death of Malikah Shabazz under unexplained circumstances just days after the exoneration of Aziz and Islam, continues the family tragedies which were spawned by the targeting and assassination of her father. Malcolm X sacrificed his life in order to advance the liberation struggles of African Americans and people throughout the globe. His legacy will continue to be a source of inspiration to working and oppressed people internationally.

Abayomi Azikiwe is the editor of the Pan-African News Wire. He is a frequent contributor to Global Research.

Unfortunately, this is nothing new. The American federal government is probably behind more assassinations (nationally and internationally) than the American people will ever know or realize. I don’t believe the average American citizen would believe it, let alone comprehend the tentacles of evil that our federal government commits behind the scenes around the world (and in our own backyard). It is just too much to ingest as many of us see our nation as a bastion of good, a place where the weary and the tired can come and make the American Dream come true. We can’t believe that the alphabet agencies (CIA, FBI, FDA, ATF, etc.) and other operations off the books have been dispatched to eliminate individuals and groups deemed the “enemy” of the Deep State Cabal. It’s true as the “truth is in the pudding”.

The list goes on and on and on. I didn’t mention Africa or Asia because it is just too long of a list. My nation’s federal government is compromised and has been for decades. Eventually, all of these evil seeds we have sown will come back to roost in our own nation. God forgive us for not paying attention to the officials we elected. We did not hold their feet to the fire or hold them accountable for their deceitful, devious acts. God forgive us. Our nation has blood on their hands.