You are here: Home » Prophecies » The Terrorist Attacks in Paris Were Just a Front
Share this post: 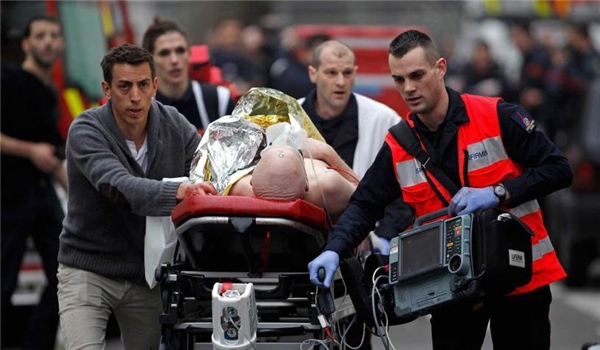 Serious word for today… civil unrest is soon to play out. There will be bloodied territories everywhere and everyone will want a piece of the action.

I know this is short, but here is what we need to know. The “BIG” terrorist attacks in Paris were just a front, just a prelude to bigger things coming, which will not be just one event. I saw a HUGE event coming and have asked the Lord what it is, but I have had no specific answer, other than to let me know it will hit EVERYWHERE.

The Lord has asked me to pull back on some things we were doing, but to continue in preparation and prayer and intercession for the rest of the year. He has instructed me to keep close watch on the Middle East, especially Israel because this is the nation where all heck will break loose.

This will affect both the righteous and the unrighteous. Many unknowns are going to be coming out and God is going to use them in a mighty way. They will be needed solely during times of judgment.

The terrors of ISIS will be nothing, not even close, compared to what is coming. Do you recall growing up with sci-fi movies? I remember when I was in high school and would watch movies like “The Day the Earth Stood Still” (1951) or movies about vampires and the dead coming back to life. Well, little did we realize that these movies were preparing us for these days ahead!

At least some of the bizarre things we saw in those movies are going to play out in the elite’s plan. Some might call it a change of DNA, or trans-humanism, or mutants coming to life, but what is so awful and what will be ten times worse than ISIS is the giants, the nephilim, the fallen angels upon the earth, as they ravage to and fro just as they did in the days of Noah (Genesis 6:1-4). They will not be as easy targets as ISIS because most of them will not be human.

Many may think that these things are not possible, but it is, and just wait till God allows the biggies to open up CERN. They want to know what’s on the other side, do they? Oh they are going to find out all right! I will assure you of this!

Hopefully people have their armor on and KNOW how to use it, and have themselves anchored in the word of God because they are so going to need this.

Are you covered and washed in the blood? Do you know where you will spend eternity?

Oh, my help comes from the Lord!

In His Service,
Bette Stevens

The Spirit came to me last night
Telling me to proclaim Repentance
King Yeshua said
“For every ten people that calls on the Name of King Yeshua/Jesus
Only one He knows”.
No SALVATION is assured until our end on earth
Even Moshe/Moses stumble The Torah/Law giver
David The King stumble he was anointed.
Become a prayer warrior
Adopt A day in Week Repent

The comment about how the elite uses media, i.e. comic books and magazines, to tell the world their wicked plans, made me think about movies. In May 2016, Marvel’s “Civil War” is coming out. I think it deals with wrestling with the question about whether to register mutants in the wake of the destruction caused by one who has explosive superpowers. This could readily parallel ISIS terror attacks and the Syrian refugee crisis and the call from some government leaders and the UN to have biometric data on every refugee. The cry for this would surely amp up if there are worse attacks ahead as ISIS has threatened. This also has implications for the beast system of monitoring everyone.

Intercessory prayer is so key and I’ve scarcely even begun appreciating it. I am the first one who needs to wake up, but we all need to be praying and reaching out in the power of the Holy Spirit. I pray God extends mercy even to the most extreme jihadist, even through dreams or visions of Jesus, that their hearts might be broken over their sins. Though their sins be heinous, as Paul said, “Christ Jesus came into the world to save sinners–of whom I am the worst” (1 Timothy 1:15 NIV). Whether murderers, adulterers or self-willed, we all need Jesus’ saving and purifying blood to wash us and redeem us.

Great word! I had what I call a flash vision. Just a snapshot. I saw a large tunnel and a large indian person with three feathers in his hair. He had long black hair and a colorful (yellow, orange, red )indian type outfit on. Only, he was not Native American he was South American. I immediately thought of Quetzalcoatl. He was walking through the tunnel. He was in no hurry, just ambling along with a curious look on his face as he continued on his journey. He was very beautiful. I believe I saw a fallen angel coming through a portal. I believe the tunnel was a portal. May God have mercy on us all. Sandy

WOW, Sandy. . . that gives me chills and yes, it truly sounds like that is what you saw. . . . it’s coming and it will be GLOBAL

Sandy,yes portals have been opened but they wait……on the word given on assignment……….and if the body of Christ has not applied discernment or been taught then they will fall prey to these beings,meaning they can come as angels of light and or in human formmm so much so that even if it be possible ,the elect would be deceived………These are the watchers……..!!!!!!!!!

Thank you, Bette, your warnings are confirmation to me.
I received a large prophecy on 11.9.15 from the Holy Spirit, here are 2 of the key words that match what you have received:
Terror arises on every corner.
The paranormal will become normal. (I posted this on Linda Clay’s blog.)

I’m receiving words from the Holy Spirit daily, they are all consistent with this blog and Linda’s blog.
The most important 3 word phrases the Lord says to me regularly are:
Do Not Fear!
Remain in Me.
Pray without ceasing.
Listen to me (only).

I did have a question for you Bette. In your audio book on hell you mention a clock spinning. Do you know if the clock stopped at 12:00?

I received a lengthy word yesterday; here is a portion I have a question on:
Behold, the clock ticks, it strikes 12.
It (time) is over, It (time) is all coming to a close.
My kingdom comes, it comes violently.
Behold the earth shall soon be filled with violence everywhere.
Do not fear, I shall lead you out.
You are always safe with Me.
Get on the Ark, it will soon disembark.
You must be on (the ark) to make it to your destination.
There is only one opportunity to get on the Ark, then, it will be too late.
Behold, the door closes quickly.
There is a short window of escape.
My angels will lead you.
I have sent them before you, before my Holy Remnant.
Behold, it is time to go.
Do not fear, the clock strikes 12.
Prepare yourself, your mind.
All will be well, Do not fear, trust only me, your Great Holy God and Strong Savior of the Universe.

Any thoughts on the clock strikes 12 would be helpful. I’m sensing time is over.
Thank you so much, please keep posting. Your posts are so helpful to the Body of Christ. Are you receiving words from the Holy Spirit daily?

Hi Beverly,the clock i saw was HUGE,and it spun around and around so fast,and when midnight strikes all is done and the angel will say Time is NO more………Hope this helps you…….Time is of the essence and the warnings are going to wind down as soon as the first judgment hits,and there wont be a need to bring to much news,it will be too late………Keep it moving……we must be staying in contact to help others……..That is most important.and yes almost daily I receive words from the Holy Spirit……GB

Ali,the new year is going to be different ,that ‘s for sure…..

Thank you Bette for your obedience to share what the LORD has spoken to you. Hard, very difficult days approaching. I understand holidays to be plural so it could mean Thanksgiving, Christmas and perhaps January 1st. I hear “sudden destruction after the new year.” Wrap yourself in the armor of the LORD, Ephesians 6, and prepare for battle. LORD bless.

I agree, Bette. . . I was given a warning dream, where I saw giants, human/fallen angel hybrids and other creatures manifesting before our very eyes. The dream also included simple instructions on what to do as a believer. Here’s the link:

Yes Linda,the Watchers are already here and in place.

BTW, Have you noticed that in a lot dreams and
visions we read on the net about the tribulation, the soldiers enforcing the NWO mark of the beast almost always seem to be 7-8 foot tall and muscular with their face covered. I believe they are giant/genetic hybrids like the one mentioned in Ken Peters video
and this Mary K Baxter video https://m.youtube.com/watch?
v=NSAs4wxiRR4&itct=CAwQpDAYECITCODaiv7c2sgCFUThHAod8nYIMVINbWFyeSBrIGJheHRlcg
%3D%3D&client=mv-google&hl=en-GB&gl=US

Max,those encounters will come after ISIS and be much much worse than ISIS.