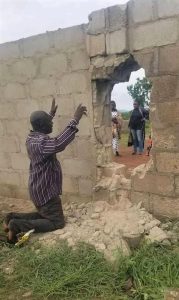 Shooting wildly, the armed assailants breached the walls of Bethel Baptist High School in Maraban Rido, on the outskirts of the city of Kaduna at about 2 a.m. on Monday (July 5) and took the students in the school hostel away at gunpoint, area residents said.

Efforts were still underway to determine how many students were abducted. A teacher reportedly said 140 students were kidnapped while 25 students escaped, but area residents living close to the school said 179 children were abducted of which only 15 escaped.

Established by the Bethel Baptist Church in Kaduna, a member church of the Nigerian Baptist Convention (NBC), the school was attacked after the kidnappers overcame some security personnel, sources said. It was the latest of a series of attacks on schools and colleges that have increased this year.

“It is another sad moment as Fulani bandits/gunmen attacked Bethel Baptist High School, Kaduna, today,” area resident Christopher Kantoma told Morning Star News in a text message. “They kidnapped all the students of the boarding school, but only 15 of them escaped from their captors.”

The Rev. Joseph Hayab, a Baptist minister and Kaduna state chairman of the Christian Association of Nigeria (CAN), said his son was among those who narrowly escaped. Many of the students remain unaccounted for, and efforts were still underway to determine the total number of students missing, he said.

“The armed bandits kidnapped many students; right now I’m speechless,” Pastor Hayab told Morning Star News. “The school is an educational ministry of my church. This is a very, very sad situation for us.”

Area resident Vincent Bodam said in a text message to Morning Star News that parents and Christians rushed to the school and were wailing and praying for the rescue of the kidnapped students.