You are here: Home » Babylon » Aliens » Suddenly some of what I thought were stars changed into yellowy-gold objects. 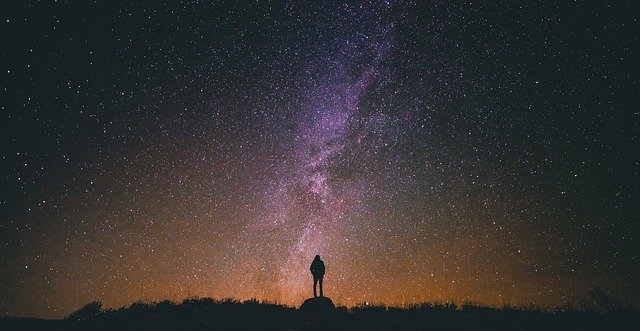 On the 7th of February 2016, I had the following dream after reading Luke 21:11 about what Jesus said about the ‘fearful sights and great signs from Heaven’ that will happen before the end. That passage later reiterates the same thing, emphasizing that there will be ‘signs in the sun and moon and stars’ (v25).

I dreamt I was in the backyard of my childhood home looking up at the night sky. At first the sky was completely clouded over, then the clouds parted to reveal a whole expanse of white stars grouped very close together, like I was looking at stars much further away than those we usually see from Earth at night (possibly light years away). Suddenly some of what I thought were stars changed into yellowy-gold objects. At first, I thought they could be asteroids, then they changed into disk-like shapes and I realized they were what popular culture likes to call ‘UFO’s’ (unidentified flying objects).

As soon as I recognized what they were, all except one flew off at near lightning speed. I saw the one that stayed very clearly suspended in the sky. It looked like the kind of UFO you’d see in a cartoon, circular with a dome on top. There were also markings on it that looked like an ancient language.

While still in the dream and still looking at the night sky, suddenly a massive silhouette of a red rider on a red horse appeared. It galloped across the sky then began galloping towards the earth. Then the dream ended.

That same day I received the dream, I asked the Lord whether there was anything His people needed to be aware about in our time concerning those things so we won’t be shaken in our faith or fearful in the ungodly way the world will be in the days ahead (v26). That afternoon I had the dream. It wasn’t revealed to me who’s behind the UFO’s, but from other dreams the Lord’s given me I believe they could be the Nephilim the Bible speaks of in Genesis 6:4. This shouldn’t surprise us, as Jesus said it will be like the days of Noah in the time leading up to His return (Luke 17v26).

The important thing to recognize is the evil source behind the unidentified aircraft, and not be in any way deceived when they appear. In other dreams God showed me some UFO’s will clearly reveal themselves in the days ahead (some will be massive) and will remain close to the earth for all to see, so we need to be prepared beforehand to reject this deception, knowing from scripture this will be one sign of the end.

The second part of the dream with the red rider shows that the Red Horse of Revelation is on its way:

Then another horse came out, a fiery red one. Its rider was given power to take peace from the earth and to make people kill each other. To him was given a large sword. (Revelation 6:4)

The red horse starting to gallop towards the earth in my dream shows great war and destruction coming to the earth in the years ahead. This shows we’re much further to the end of all things than many today believe. We can encourage ourselves however in the way Jesus encourages us in Luke 21:28:

“When these things begin to take place, stand up and lift up your heads, because your redemption is drawing near.”

“I have told you these things, so that in me you may have peace. In this world you will have trouble. But take heart! I have overcome the world.”

It’s also possible the red horse relates to Zechariah 1:8 and to the passage’s broader context which shows the Lord will have mercy on His people Israel (v12) and take vengeance on nations that have persecuted them (v14-15). So let’s also make sure we’re praying for Israel in this season.

The coming days are going to bring fearful sights in the heavens and signs on the earth beneath before Jesus returns, so let’s make sure we continue to abide in Christ letting nothing shake us, and put His kingdom first.