You are here: Home » Prophecies » America Under Attack » “I suddenly noticed a very angry, very large brown bear on a rampage, wanting to kill us.” 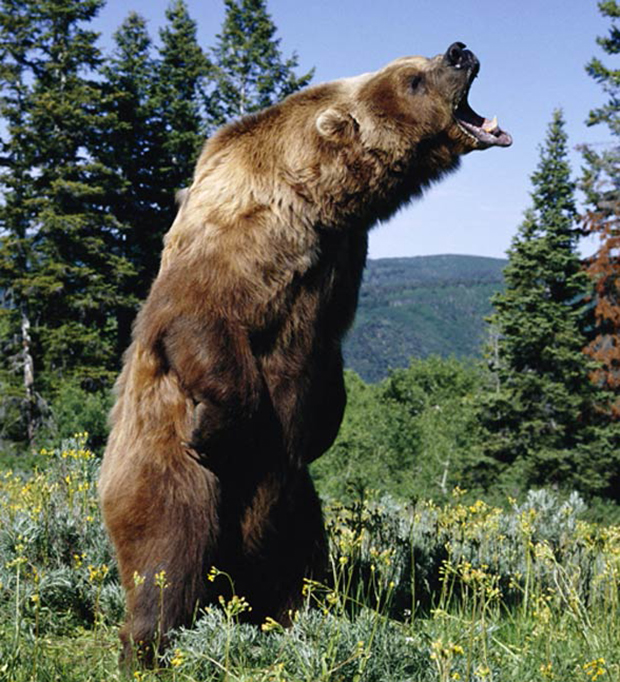 I had a dream early this morning, as follows. The Lord told me to release it.

In the dream, I was living with my husband in a small, spartan cabin in a clearing in a dense thicket. All was quiet when I suddenly noticed a very angry, very large brown bear (Kodiak size) on a rampage, wanting to kill us. It was incredibly ferocious.

I became frustrated when I warned my husband because he didn’t recognize the danger. So I started looking around for a box of large-caliber rifle shells, determined to kill the bear myself. But all I found was an odd container of shells which were very oddly constructed, in a design we had no weapons for; the way the shells were made it would be physically impossible to fire them from any weapon I’ve ever seen or even heard of. (If I could draw you a picture, you’d understand – but the words are what’s important) Then I woke up.

Interpretation:
I asked the Lord if this bear was Russia again, as I’ve had other dreams of a very large bear that represented Russia. He replied, “Yes. Stay out of his way.”

I was given to understand this was a warning of God’s impending judgment on this nation, through the nation of Russia, and that we were not to try to stop this judgment, or fight against His agents that bring it. We can, and should, pray for His mercy, but NOT pray against it.

Katherine Lehman loved the Lord Jesus when she was a small child, but as she grew up, she turned away from Him. One summer day in the early 80’s when she was far away from Him, she had hit rock bottom and cried out to God saying, “If you’re real, you’re going to have to show me.” He faithfully answered her cry. Since 2010, she has drawn much closer to Him and devoted herself to studying His Word.

Wise words IMHO. Could you have been in Alaska? Heard of several visions saying the invasion of Russia will be from the north. I’ve also heard of actual Russian troops in the northwest US, Washington state I think. Our enemies can only take us out from within. We are seeing that going on today with the traitors in places of power in our government. Thank you for sharing this and God bless you.
P.S.
The wisest move will ALWAYS be staying inside the will of our Lord.

I had two dreams about a bear 5-6 years ago. In the first dream I was driving my bicycle when a bear ran up and kept pace with me and growled as he went. I happened to have some food and I gave it to him as I was driving. He accepted the food and then became tame. Then he turned into a man.That was the end of the dream. In the second dream I was in a neighbors house when a bear came to the door. The woman of the house let the bear in. I moved to the back of the house with my son and her son who were playing together. Then we left out the back door. The bear came out into the yard to meet us and was starting to go after my son. but then I gave it some food instead. That was the end of that dream. We live in Ontario. Incidentally, I saw a bear in the front yard of that neighbor not very long after that dream. I told her about the bear but not about the dream. That was the only house other than ours where I have seen a bear around here.

Pastor Joe Sweet also had a dream (?) about a huge bear he was trying to evade by diving into a pond (if I recall correctly).

Katherine, in your message you say, ” we were not to try to stop this judgment, or fight against His agents that bring it.” Are you inferring that we should not try and fight against Russian soldiers on our land?

From what I have studied from people’s visions of Russian troops, first the saints will go to places of refuge. Then after a period of time when the foreign troops are worn down, weak and hungry will people come out of the camp cities and pave the way for the return to their land. So I would say first flee to safety and later on clear out the troops.