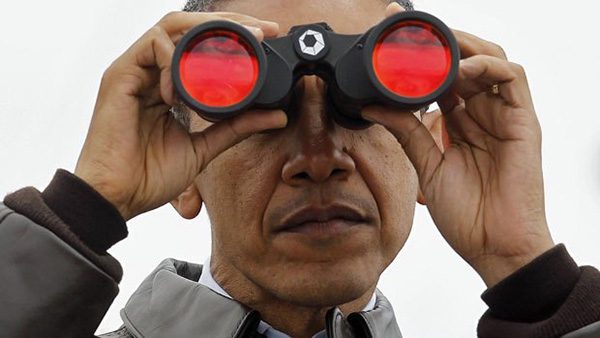 With the war of words over the latest allegations by President Trump that BHO spied on him in Trump Tower during the campaign – here is some tangible and factual evidence that this indeed happened.

President Trump has been provided the evidence of a paper trail leading to a FISA court that substantiates his assertions that Obama, obtained authorization to eavesdrop on the Trump campaign under the pretense of a national security investigation. (Source: Canada Free Press)

This is as Serious as it Gets

There is a large storm brewing over Washington, DC right now – a storm that could dwarf anything ever seen in recent times. It is growing stronger by the hour as new information is being disclosed that strongly suggests that it is possible, even likely, that Obama and his Department of Justice maliciously and criminally misused the FISA process to collect intelligence on Presidential candidate Donald J. Trump. Additionally, Obama personally relaxed the limitations on how such information collected could be disseminated in the weeks before leaving office.

The political ramifications from this, if proved correct, could be unprecedented in scope. Once fully exposed, it would explain the curious actions of Obama as he prepared to vacate the White House. It would also explain, in context, the actions and statements of not only Barack Hussein Obama, but others in key positions of power including Loretta Lynch, Sally Yates, John Brennan, and others within the media.

At issue is Obama’s insistence to secure a federal wiretap warrant of Donald J. Trump, the candidate, using the federal court system as the mechanism to do so. The ostensible probable cause was alleged ties between Donald J. Trump and/or his associates with Russia.

The first warrant application was made in June 2016, according to reports published by The New York Times and elsewhere, but was rejected due to the lack of probable cause of criminal activity.

When the request was denied in regular federal court, Obama and his Justice Department attempted an “end around” by citing the existence of a “foreign actor” and made a similar surveillance warrant application through the more specialized Foreign Intelligence Surveillance Act (FISA) court in October of 2016. According to published reports, that warrant application was rejected as well, a rare occurrence in the FISA venue, which strengthens claims that no evidence of any foreign involvement ever existed. It has been reported that the initial warrant application to the FISA court specifically named Donald J. Trump.

It is also relevant to note here that this is the type of activity that led to the creation of the infamous “Wall” that was referenced after the 9/11 attacks. Its relevance to this specific instance is explained well by former federal prosecutor Andrew McCarthy in this January 11, 2017 column.

Apparently undeterred, the Obama Justice Department submitted yet another application to the FISA court, this time omitting the name of Donald J. Trump and submitting it as a FISA specific case. The FISA court reportedly approved the application under the new and more narrow scope. Specifically, ties to two Russian banks: Russia’s SV bank and Alfa Bank. The alleged target was a computer server reportedly situated inside the Trump Tower.

Based on the lack of action consequential to that warrant and wiretap, it has been stated (and can be reasonably determined) that no actionable evidence was found.

It is also notable that on January 3, 2017, U.S. Attorney General Loretta Lynch signed off on rule changes for phone taps.

It appears that President Trump has been provided the evidence of a paper trail leading to a FISA court that substantiates his assertions that Barack Hussein Obama, working in concert with others including those wielding the full might and power of various federal agencies, improperly obtained authorization to eavesdrop on the Trump campaign under the pretense of a national security investigation, and continued such monitoring beyond its tenuous scope even when no evidence of wrongdoing was found.

This is as serious as it gets. – (Source: Canada Free Press)

LOCK THEM ALL UP!

And may they find the forgiveness of the Lord Jesus Christ from behind bars.

Geri Ungurean is a Jewish Christian who was born-again in 1983. Yeshua is her life. Writing about Him is her passion. Her subject matter varies, including Bible prophecy, apostasy in the church, the political climate of our country and our world, and the Muslim Brotherhood in America and its offshoots. I personally believe that these Islamists should be banned from the U.S. and should certainly not be in key positions in our government. Many countries, even in the Middle East have banned the MB as terrorists. It’s time for America to do the same. They are only here for political jihad. The Constitution is NOT Sharia compliant. My greatest love is writing about my Lord and Savior, Jesus Christ. I pray that some of my articles will fall in the hands of my Jewish people. Visit her blog, Absolute Truth from the Word of God.

Obama and the MSM are in big trouble, so big that it’s going to be hard to spin their way out of it. The country’s elections and thereby it’s very destiny has been dependent upon the news and facts it has been fed by the MSM. The average American has trusted the media. The talking heads who deliver the “facts” to us look like honest, God fearing citizens, just like us but who gives them the news to read and who are the owners of the FIVE media groups that control 90% of the media? This we know, that whenever a poll is taken of the MSM, the media votes for the liberal candidate 95% of the time. But they are the untouchables, that is until Donald Trump. Trump did what most candidates would never dare to do and was thought to be suicidal. He attacked the MSM as dishonest, immoral and un-American and the amazing thing is he got away with it! This had to be God and with good reason. Very few Americans, including church-going Americans, knew how corrupt and evil this world is. How guilty and deserving of judgment this world is. This God ordained exposure hopefully will result in many luke warm Christians to take a closer look at their own behavior and repent, and, secondly, will justify why many will soon be sent to eternal punishment. The scriptures say how corrupt the world is, how man has a fallen nature, how the whole world is deceived and that Satan is the prince of this world. Perhaps now a few more people will get the picture the Bible paints about THE WORLD.

God started this inquisition against the deep state and He doesn’t do things half way. Keep praying for Trump’s protection and that God will give him wisdom, truth, knowledge, understanding, the gifts of words of wisdom, words of knowledge, discerning of spirits and miracles. Let’s team up with God and get the whole job done!! We’ve got Trump’s back!

gotta have more evidence from the actual FISA requests in a congressional investigation. The RINO GOP do NOT want to do that (nor do the dems). They’ve got too much to lose to open that door to a lot of investigations, esp. anything to do with NSA. They will do their best to stop it. Pray that everything gets out in the open.

Sue, all it will take is one honest man with the evidence against Obama, Jarrett, Podesta or Loretta Lynch and Trump can put the whole barrel of rats in prison. Among the thousands of employees in the State Department, CIA, FBI, DHS and Justice Department I believe the Trump Administration is getting new valuable information every day. I don’t think Trump made his weekend’s allegations against Obama without some strong evidence in hand. I think God is in charge of this inquisition and is going to shine His Light into every corrupt corner. The Weiner computer alone could bring down half of Washington and God knows where it is and maybe Trump does too. Trump should hire Judge Giulioni and Judge Napolitano to get things rolling. He has taken the offensive and he should make every attempt to keep the deep state back on it’s heels and off balance. This is war.