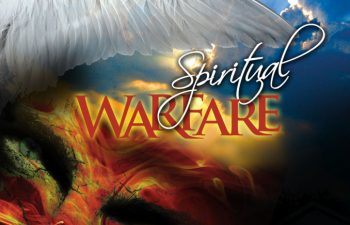 Brothers & Sisters, many of us sense the times we are in and we understand that very soon, things will become significantly more difficult globally. Now is an excellent time to firmly ground yourself in God’s Word and understand how to use the power of God’s Word and engage in spiritual warfare. Let us all be found worthy and ready in these times for the battles we are facing and the battles we will face.

An excellent resource for Spiritual Warfare is Derek Prince (1915-2003) who “…was one of the most prominent Bible teachers of the 20th century and his ministry touched millions of people across the globe. His books and tapes continue to be a source of inspiration and insight to Christians today. Derek was the author of more than 45 books, some of which have been translated into 60 languages, and his radio broadcasts, ‘Keys To Successful Living,’ and ‘Today With Derek Prince,’ have been heard in more than 60 languages, reaching every part of the world.“ Source

Here is an eye-opening 57:54 minute video entitled, “Casting Down Strongholds”, in which Derek Prince explains the nature and activity of spiritual warfare.

For those looking for much more in-depth teaching on Spiritual Warfare, here is a 2 hour & 42 Minute Video from Youtube Channel Intercessors for America, entitled, “Spiritual Warfare, Teachings 1-3, a message by Derek Prince”.

Derek Prince authored a book entitled, “Spiritual Warfare”, which can be downloaded for free at this link.

Note: I did not start a free trial. I just chose download it and saved it to my Ipad.

This has been a very real and intense battle for several years now. Thank you.

Thanks for these resources. I’ll be happy to listen to and re-listen to the ones I’ve heard. Derek Prince is one of my favorite teachers. He’s actually my go to teacher for when I’m having difficulty understanding anything in the Word. I’ll just search the “verse” and “Derek Prince” and see what comes up.

He has an amazing testimony. He was educated at Cambridge University and studied Hebrew and Greek before he was saved. After his conversion he was able to use this education to study and teach the Word of God. He often times will give the “Derek Prince” translation as he is fully qualified to so and can teach Hebrew and Greek at the university level. About Derek Prince: https://www.derekprince.org/Groups/1000103610/DPM_USA/About/About_Derek_Prince/About_Derek_Prince.aspx

If any one here should like a comprehensive study on demons, curses, and blessings I would recommend his book entitled: How to Expel Demons Break Curses and Release Blessings. Not sure if it’s out of print. Looks to be quite expense on Amazon. Please check Ebay. Also, please note that this is really just a combination of two books in one volume. The two books individually are:

They Shall Expel Demons: What You Need to Know about Demons – Your Invisible Enemies

Blessing or Curse: You Can Choose

One of my other favorite teachers that is less known is Henry Gruver. As some of you know he passed on recently. He has some detailed end time America visions but he also literally prayer walked different parts of the world at the Lords command to pray over the people and land.

End Time America and other Visions:
Cross+Wise: Visions of a Walker: http://theheckhypothesis.com/pdf/Cross%20Wise%20Visions%20of%20Henry%20Gruver.pdf

I know the Lord will bless us richly as we seek to know Him through His Word!!

Excellent resources CKd! Thank you for sharing these with our community. We must make sure we have the tools & knowledge to prepare for the trials ahead.

I am reading Derek’s book that I shared in this post but will definitely look into that other book as well. I did not know about his background in both Hebrew & Greek & his competence to teach these at University level. Very interesting.

I agree that Derek Prince has a skill in explaining Scripture in a very clear manner. He is also one of my “go to” teachers.

I keep seeing 11, including the timing of this post.
.

I am experiencing warfare now, fighting depression. Thank you for the resources.

Hi B J – You are very welcome. Spiritual warfare seems to be a constant for many Christians. I hope you will find the resources helpful as I have. I will add you to my prayers. ???. Blessings.

So interesting about the timing! Wow! I never pay attention to that.

CKd
Reply to  B J

B J, keep fighting Bro. Speak the Word of God over yourself. Please download read this PDF article by Derek Prince. He was an amazing teacher that struggled with and overcame bouts with depression.

The Article is entitled: You’ve Got to Have Hope
https://www.derekprince.org/Publisher/File.aspx?id=1000021519

Abigail
Reply to  B J

B J I’m sorry to read about your depression; I’ll keep you in my prayers.
Regards you seeing number 11 please view this vid about a dream sent by God to a child about disaster coming on 10th Nov. It’s called Rapture dream but towards the end she gives the disaster a date. https://youtu.be/TWb7nUrqWNs

thank you Abigail for sharing this video. she is precious. I listened 3 times though and she said the disaster was the 10th of October???

Abigail
Reply to  B J

Hi B J …………..I seem to have got muddled up about the date of the video. The little girl said that disaster was coming on the 10 Oct and not Nov. Sorry about that.

This is what Christians need to hear.. God is greater than anything that may come into our life. Luke 10:19 gives us all we need to know to prepare for spiritual warfare..

Thank you Expat Gal, for all the information you have put out there for all to see during the last 6 months. Now if only the Christian people will grab hold of God and hang on for dear life for the Spiritual battle is right around the corner.