You are here: Home » Prophecies » America Under Attack » “Soldiers were going door to door, demanding the homeowners hand over their guns and their children.” 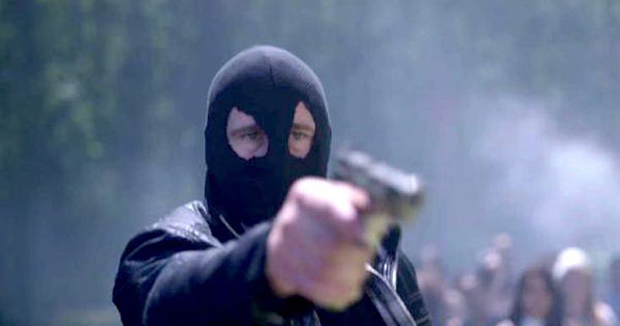 Several years ago, I had a dream that I was at my father’s house with my husband and young daughter. It was night time and we began to hear low flying planes in the area. I asked my dad if he knew if there was some kind of military drill happening and he said he hadn’t heard of anything. When I went to the window to look out, I saw several low flying planes with men jumping out of them. They were dressed in black with black hoods over their heads. I then saw bright flashes of lights and knew there were bombs going off throughout the city. My father was not concerned and continued to watch television.

A while later, I looked out the window and saw these same men dressed in black, with black hoods, leading lines of children (still wearing pajamas) going from door to door. At that VERY moment, I knew that the enemy had taken over the airport and the major roads going in and out of the city. I also “knew” the soldiers were going door to door, demanding the homeowners hand over their guns and their children. If the adults balked or refused they were shot on the spot. The children were carrying the guns the soldiers were taking from the homes (perhaps because the soldiers knew they didn’t know how to use them).

Once I realized what was happening, I ran to the living room and told my dad and husband. My dad, still unconcerned, continued to watch TV. My husband went to lock the front door, but it was too late as the soldiers were kicking it open.

I remember thinking that I had to choose between letting our daughter go with the enemy or fight and be killed. I was sooo torn because I knew if we let her go without a fight, we would have nothing to defend ourselves or fight with to try and get our children back from the enemy.

As with everything else you read or hear, please take it to the Lord. In a previous dream I had, the Lord told me three times, “PRAY, PRAY, PRAY!!”

Kate P grew up in a Christian home, in a small town in the Midwest. Her primary spiritual gifts are intercessory prayer and encouragement. She and her husband have one daughter and two amazingly adorable cats.

God will protect you and your children. I had a similar dream 2 years ago where men dressed in all black with guns invaded homes to take people. My young child and I hid in a corner in my bedroom, the soldier came in to search the house looked right at us and never saw either of us. I knew we had been supernaturally protected and the enemy would not be able to see us. I watched as others were dragged out of their houses through my window, but we were safe.

This is a warning to God’s people. Do not give up your means of protection for security from a tyrannical government. Please heed God’s warnings from His people prophesying…

I read a dream almost similar to this posted on Steve Quayle’s site several years ago.