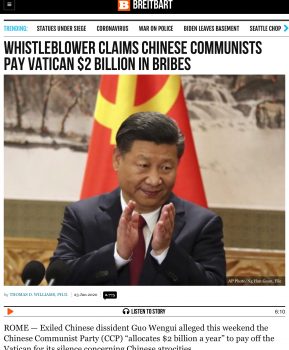 “In a June 20th interview on The War Room, Mr. Guo said the CCP earmarks massive sums each year to win the allegiance of foreign countries including the Vatican, Italy, and Australia. Among them, the Vatican receives up to 2 billion dollars from the Chinese Communist Party every year, he said….

According to veteran Vatican journalist John L. Allen, Jr., the Vatican has spared no effort in its attempt to woo Beijing into full diplomatic relations, a key priority of the Francis papacy.

The Vatican is ‘covetous of a relationship with China, and often apparently willing to stifle objections and give away a great deal’ in order to move toward that goal, Allen wrote last month….

The Vatican’s 2018 overture to Beijing was sweetened by the May 2020 launch of a new Chinese edition of the Jesuit-edited journal Civiltà Cattolica, which enjoys a semi-official Vatican status, Allen noted….

The pope has lavished fulsome praise on China, insisting that China’s communist government protects religious freedom and that ‘churches are full.’

Meanwhile, the chancellor of the Pontifical Academy of Social Sciences, the Argentinian Bishop Marcelo Sanchez Sorondo, has held up communist China as the best model for living out Catholic social teaching today.”

2 Peter 2:1, KJV: “But there were false prophets also among the people, even as there shall be false teachers among you, who privily shall bring in damnable heresies, even denying the Lord that bought them, and bring upon themselves swift destruction.”

1 Timothy 4, KJV: “Now the Spirit speaketh expressly, that in the latter times some shall depart from the faith, giving heed to seducing spirits, and doctrines of devils;”

Matthew 7:15, KJV: “Beware of false prophets, which come to you in sheep’s clothing, but inwardly they are ravening wolves.”

Romans 16:18, KJV: “For they that are such serve not our Lord Jesus Christ, but their own belly; and by good words and fair speeches deceive the hearts of the simple.”