You are here: Home » Babylon » 1st Beast is Obama » “Sit Down or You Will Be Shot!”
Share this post: 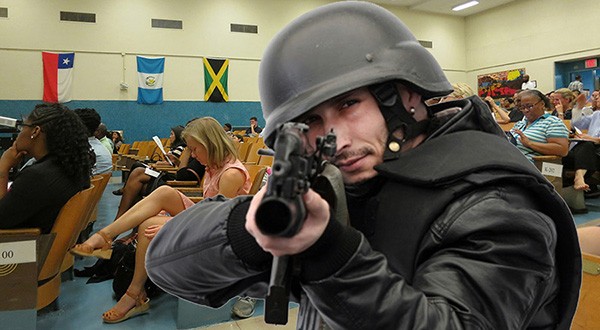 I have had multiple warning dreams revealing evil schemes in our nation. Usually, I am in a group or audience while something evil is happening on stage. Guards are all around to keep us in our seats, but in all of my dreams I get up and leave anyway, which leads to resistance and fighting. There is always victory though because I am armed with the name and the blood of Jesus!

In one of my dreams, the setting was some kind of small auditorium, like a school cafeteria that doubles as an auditorium. I was part of a small group of people, probably thirty or so, who were all being seated in the audience with all of us facing the front. I did not recognize most of them, but I knew we were somehow related, as in we were co-workers at this ‘facility’. However, I knew the people seated next to me in real life because I had worked with them in various ministries.

Once we were all seated, a bunch of guards in military clothing and heavy weapons came down a ramp on the right side into the room. In the midst of these guards was Obama. They all went to the very back of the room and the guards spread out throughout the back and sides of the room. It was made very clear that we were to stay in our seats and watch the show.

All at once, various evil activities took place up front on the stage. I’ll leave out the details, but it was something to make the LGBT folks quite happy.

I was very disturbed and I started looking around at all the other people in the seats. I noticed they were like in a daze: a glassy-eyed stare, with no life in their faces, like zombies. I was getting more and more disturbed and perturbed until I turned to my friends sitting beside me and said, “Are you just going to sit here and watch this filth?”

I never got a reply from any of them. I then jumped up from my seat and shouted, “No, I’m not going to sit here and watch this filth!”

I immediately heard, as through a loudspeaker, a booming, authoritative voice from the back of the room, commanding me, “Sit down or you will be shot!”

I walked in front of the others to get out of the row where I was seated. I then walked quickly up to the front of the auditorium, as the only unguarded exit in the room was up front, behind the stage area. Then I heard another command, “Get back in your seat!”

I ignored it and kept walking. I went through the exit door and entered an area of the building I had never been in before and didn’t even know it was there. It was a hallway, analogous to a school or hospital hallway with rooms on each side and heavy, metal doors with small windows in them with wire inside the glass.

I saw a room with a nuclear caution sign on the door and as I passed I saw people inside wearing radiation suits and gloves. They were handling some kind of substance. Then I saw a room with various warning signs on the door, and I knew that room had dangerous chemicals inside. I saw someone in a protective suit, spraying a white misty spray and I knew it was some kind of very bad, or deadly, chemical spray.

As I progressed down the hallway, I saw some other rooms with other dangerous items in them, including animals and nephilim-like-giants. I somehow knew these were all weapons of various kinds, which were being prepared to unleash on people.

At the end of the hallway, I went through another door, and found myself in a big, open area with lots of glass windows and skylights. Almost immediately, I was met by a group of soldiers in various military uniforms that I didn’t recognize. I noticed all of them were foreigners, mostly Asian. They all pointed their weapons at me and told me, “You will be shot because you don’t belong here!”

But I pointed my finger at them and said, “Go ahead, pull your triggers. If God allows it, then I will die. If God doesn’t allow it, then your guns won’t work. Try your best, but know that my God is in charge and holds the ultimate authority.”

That was the end of my dream.

I have also seen foreign military troops in other dreams and in each case they have attempted to intimidate me, but I have pointed my finger at them and taken authority in the Name of Jesus. Then they either leave, fall to the ground, or become paralyzed!

What I believe God was saying to me in this dream is multi-faceted.

1. Many people, even Christians with whom we minister and associate, are under some kind of spell of the enemy. God expects us to follow Him, period. Whether or not anyone else follows, God’s call is the same to each of us. In Matthew 4:19 Jesus said, “Follow me, and I will make you fishers of men.”

2. God is the source of all we need to walk in obedience with Him. 2 Peter 1:3-4 states, “According as his divine power hath given unto us all things that pertain unto life and godliness, through the knowledge of him that hath called us to glory and virtue: Whereby are given unto us exceeding great and precious promises: that by these ye might be partakers of the divine nature, having escaped the corruption that is in the world through lust.”

3. There are plans, schemes, devices and preparations in the works, right now, to bring chaos, havoc and destruction to this world. There was no timeframe given to me in the dream, other than the fact that my associates and friends were with me and they all looked just like they do now.

4. The time is NOW to prepare ourselves spiritually so that, when we are facing the horrible evil acts of the enemy, and being oppressed by the enemy’s systems, we won’t waiver, but instead we will rise up in the Spirit and do what needs to be done! Stand for God. Stand for Jesus, the Truth! In Ephesians 6:10-18, the passage about the armor that God has given to us, the word “stand” (in the KJV) is listed 4 times!! God gave me a message on April 24, 2014 in response to my question of “is something coming soon?”. He led me to Revelations 14:6-7 and then told me, “Fear God, repent and prepare!”

I believe we are now in the ‘prepare’ phase. God is preparing us to be His Spotless Bride, washed white in the blood of His Son, Jesus Christ (from a message He gave me on 12/9/15).

May we draw ever closer into Him, following God’s admonition to us in Hebrews 12:1-2, “Wherefore seeing we also are compassed about with so great a cloud of witnesses, let us lay aside every weight, and the sin which doth so easily beset us, and let us run with patience the race that is set before us, Looking unto Jesus the author and finisher of our faith; who for the joy that was set before him endured the cross, despising the shame, and is set down at the right hand of the throne of God.”