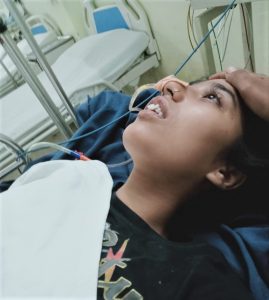 NEW DELHI (Morning Star News) – A 24-year-old Christian woman in northern India regained the ability to speak nearly a month after she went into shock from a Sikh family choking her unconscious and attacking her sister and mother, sources said.

“Meenu is unable to come out of shock,” her 27-year-old sister, Harpreet Kaur Tank, told Morning Star News. “She has lost her appetite and hardly talks…[The assailant] caught my sister from the throat and pressed it so hard, almost choking her to death. She fell unconscious.”

In the June 20 attack on the widowed mother, sisters and others, five Sikh family members also partially stripped the Christian women as they beat them and reviled them for believing in Christ, sources said. The women, who became Christians in 2016, had just returned from an evening worship service. 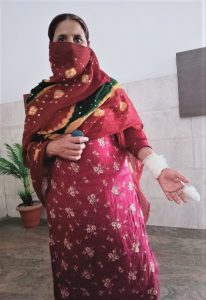 Meenu Kaur Tank was rushed to a hospital immediately after the 45-minute ordeal, and when she regained consciousness there, she was unable to speak, a pastor helping the family said.

“The doctors said that she is in a state of shock and thus has lost her voice,” area pastor Vishnu Dev said. “It took almost a month for her to begin to speak.”

One of the Sikhs, identified as Manjeet Singh, first slapped and hit their mother, 48-year-old Munesh Devi, and then his son, identified as 22-year-old Monu, took over, punching and kicking her, Harpreet Kaur Tank said.

Monu also choked Harpreet Kaur Tank and tore her dress from the neckline to the waist, she said, in tears.

“A man belonging to the attacker family attempted to choke one of the daughters and then stripped her of her clothes,” Pastor Dev said. “He then turned to the other daughter and caught her by her throat, trying to kill her, until she fell unconscious.”

Harpreet Kaur Tank said that their older sister, Gurjeet Kaur, who lives in the same village, came with her husband to rescue them, but they too were beaten.

The night of the attack, Harpreet Kaur Tank had gone to fetch water from a water cooler outside a Sikh worship place near her house to serve the couple who had dropped them home from the Christian worship service.

Singh stopped her on the way, complaining that her guests had parked their car near the Sikh temple, she said.

“Though it had nothing to do with Manjeet, yet I assured him that I will immediately get the car moved,” she said.

In coarse language, Singh began to berate her family for changing their religion for material gain, she said.

“He said that we were poor people once, and now we go about in cars. He also said, ‘He [Jesus] did not know who His [earthly] father was, how can you follow such a man?’” she said. “I still requested him to stay calm, and that I will immediately ask the guests to remove the car from the parked spot. But he continued to abuse, saying that he will set the car on fire.”

She went back into her house, and the guests moved the car to a different spot, but the Sikh family then came out and began beating Devi and her daughters, she said. After Mono struck Devi, then Singh, his wife and daughter began hitting her in turns, Harpreet Kaur Tank said.

When her sister, Gurjeet Kaur, arrived with her husband and were assaulted, one of the assailants tore some of her hair from her scalp, Harpreet Kaur Tank said.

Meenu Kaur Tank was refused admission to a nearby hospital and was taken to High Care hospital in Ludhiana, where she received treatment for a week, family members said. Pastor Dev said that he then learned of the attack, went to the hospital and arranged for her to be transferred to Christian Medical Centre, or CMC, where she remained until July 2.

When Devi and her daughters went to the Dehlon police station the night of the attack, officers told them to first go to a hospital for treatment and then they would register a First Information Report (FIR), Harpreet Kaur Tank said.

“It was 10:30 at night, and they said that as it is too late, they will only register the case in the morning,” she said.

Investigating Officer Jaswinder Singh of the Dehlon police station told Morning Star News that they initially did not register a complaint because “there were no external injuries.”

Police later visited the hospital and pressured the Christians to reach an agreement with the assailants, Pastor Dev said.

“This is how it is,” he told Morning Star News. “The rich and influential beat the poor and then want to hush the matter by paying money, denying them justice.”

Harpreet Kaur Tank recalled that a policeman told them, “We will get you treated [medically], what else do you want?”

Pastor Dev said he visited the office of the commissioner of police and, in his absence, met with the joint commissioner, who directed Dehlon police to immediately register a case. The FIR was registered that night, June 26.

Attorney Nav Chahal, who practices at the High Court in Chandigarh, said police delayed registering the case due to political pressure exerted by the assailants.

“While narrating the incident to a policeman, who was noting the details, I was repetitively told not to go into details, and that I should state the matter broadly,” Harpreet Kaur Tank said. “They also told me that I would be required to present the details only before the magistrate. I had no experience and did not know that all the details should have been included in the FIR. We were all alone, struggling to be heard.”

Sub-Inspector Manjeet Kaur of the Dehlon police station told Morning Star News that she went to meet Meenu Kaur Tank in the hospital to record her statement on orders from the police commissioner’s office.

“When I went to see her, she was in CMC Hospital, and she was in a condition where she could not utter a single word,” the sub-inspector said. “The doctor there told me that she was in a state of shock, and that she was frightened, maybe because of what she had gone through.”

The sub-inspector recorded statements from her sister and mother, she said.

Police charged Singh, his son Monu and brother Sikander Singh, but the Christian family and other Christians regard the charges as too mild. A delegation of 8-10 Christian leaders met the commissioner of police on July 3 requesting stronger charges.

“The police faltered in taking action against the accused as they are well connected [politically], thus mild charges were lodged against them,” said Albert Dua, president of the Christian United Federation and one of the delegates.

“Whatever statement she gave, we framed charges accordingly,” he said. “We cannot make changes to what she stated.”

Asked why the alleged assailants have not been arrested, he said, “We are raiding their home time and again, but they are absconding. We also carried out a raid yesterday [Monday, Aug. 2].”

Attorney Chahal lamented that the assailants were not arrested even though they were roaming openly and visiting their house.

A lower court has rejected pleas for interim bail by Manjeet Singh and Monu, while Sikander Singh has applied for bail in the High Court, I/O Singh said.

A hearing for Sikander Singh is scheduled for November, he said.

Meantime, the Christian family said they were receiving threats from the Sikh family’s relatives and were fearful as pressure continued for them to either settle or be expelled from village.

Terrible! Prayers for healing and restoration of the family, especially Meenu, for justice to be done, for the salvation of the attackers and the police, and for protection for the Christian community.