You are here: Home » Church » Mighty Ones » “I sharpen you now in preparation for battle.” 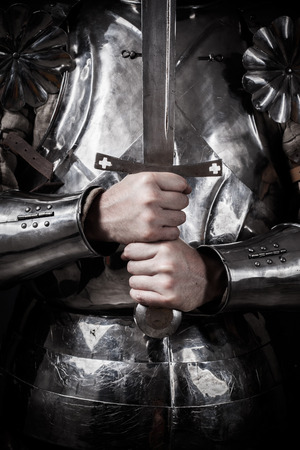 During worship this weekend, I became aware of an intense, unrelenting pressure which someone was experiencing. I did not understand where it was coming from. Then I saw the edge of a sword blade being pressed against a revolving grinding stone as it was sharpened. The Lord said, “Some of My people think they are still in the refiner’s fire because of the intense pressure felt against the unrelenting hard place which they are experiencing. But the fire has completed its function and you, my weapon of war, are fully formed. I sharpen you now in preparation for battle.”

For I have bent Judah for Myself as My bow, filled the bow with Ephraim as My arrow, and will stir up your sons, O Zion, against your sons, O Greece, and will make you as the sword of a mighty man. (Zechariah 9:13)

Then I saw the scene in Revelation 19 with the sword was coming out of the mouth of the One Who is called Faithful and True, and I was given understanding that this sword proceeding from His mouth would speak and decree the Word of God that is sharp to divide between soul and spirit and that this battle would be waged both through writings and the spoken word in live messages and decrees.

The sword is kept in its sheath against the thigh of a mighty man until the moment he needs to wield it. But when He knows the battle is about to begin, he prepares His sword accordingly.

And I saw Heaven being opened. And, behold! A white horse, and He sitting on it having been called Faithful and True. And He judges and wars in righteousness. (Revelation 19:11)

The intention is to judge and wage war in righteousness, not unrighteousness. Remember the description in Isaiah 11, both of the Lord and ultimately of those who have grown to the full measure of the stature of the fullness of Christ:

But with righteousness and justice shall He judge the poor and decide with fairness for the meek, the poor, and the downtrodden of the earth; and He shall smite the earth and the oppressor with the rod of His mouth, and with the breath of His lips He shall slay the wicked. Isa 11:5 And righteousness shall be the girdle of His waist and faithfulness the girdle of His loins. (Isaiah 11:4)

Here is the key – judging with righteousness and justice and striking the right target down! It is no use slaying the poor and downtrodden by mistake and causing the oppressor to rejoice that you have strengthened his hand by ill-chosen words.

A dull sword cannot be used with precision in battle and so He sharpens with intent to use this weapon of war with precision in the days ahead. The sharpening is painful for the sword and it is diminished in measure by the surface against which it is held and pressed, but it is far more effective to deal one swift accurate blow with a razor-sharp sword against the enemy, than it is to hack repeatedly at a target with a blunt blade.

I was also given the impression that the ‘grinding stone’ which the Lord will use may also be the hard heads of other believers in the Body of Christ. Do not be tempted to use your tongue to hack at your brother or sister in Christ when contending. They are not the enemy. Remember, the grinding stone is also one of the Lord’s tools. It is not part of the enemy’s arsenal. You are still in the tool shed or the heavenly Blacksmith’s quarters, being adequately prepared. We wrestle not against flesh and blood and any opportunity to be sharpened in these final preparatory days is in order to deal death blows to the hiding places of the enemy and to decimate his kingdom. Allow the pressing to remove any dull bits in your understanding of the Word and do not be a part of inflicting ‘friendly fire’. A sharp sword wielded by the King of Kings and Lord of Lords will pierce immediately to the heart of the matter. Paul so accurately describes the godly manner of engaging in battle:

24 And the servant of the Lord must not be quarrelsome (fighting and contending). Instead, he must be kindly to everyone and mild-tempered [preserving the bond of peace]; he must be a skilled and suitable teacher, patient and forbearing and willing to suffer wrong.
25 He must correct his opponents with courtesy and gentleness, in the hope that God may grant that they will repent and come to know the Truth [that they will perceive and recognize and become accurately acquainted with and acknowledge it],
26 And that they may come to their senses [and] escape out of the snare of the devil, having been held captive by him, [henceforth] to do His [God’s] will. (2 Timothy 2:24-26)

Yes, civil war has been prophesied within the Church, and unfortunately it is coming, but make every effort to preserve the bond of peace and allow the One Who wages war in righteousness to use you to set your brethren free through your courtesy and gentle approach in speaking Truth. And at this point, when you are still in the process of being sharpened, receive the reducing at the hand of the grindstone with humility. You are becoming the swift sword of a Mighty Man!

Wow this is actually happening. The flow of the kingdom is really real, and i’m in it. I think 95% of the churches in America have NO IDEA what the Spirit is saying to the churches, NOW. RHEMA WORDS. I am one who could’ve never seen myself ever taking the offense against Satan, yet today i was commissioned by the Lord to reprove an elder of an old church i got ex-communicated from. When we met up i had zero fear, by the time we met up i had filled myself up with chapters upon chapters of scripture and was constantly turning to God to receive his peace. I was saying things that sounded absurd to the elder and would sound absurd to others on Z3, but i was so yielded to the Lord i didn’t care, i even had fun with it. The peace of the Lord completely nullified all threats of the enemy. This dude would laugh at the things i said like i was ridiculous, but i felt zero guilt or shame or pain, because the anointing was on me, as a matter of fact i felt inwardly as if he was the guy with pie on his face and didn’t even know it. The Lord showed me so much during this meeting. I’ve never inwardly had this much power over my circumstances, i’ve always felt like the victim. What an experience. And it’s only going to go up from here? My God, what will i become? Now i understand why the world will marvel at us.Actually, we will be the ones marveling most at what God has done in us! And because i felt like this dude was in the palm of my hands i had to make sure that i didn’t become overly prideful and… Read more »

I with you Derrick

Thank you Michelle! I need all the support i can get! It’s definitely still not an easy road. As i am not one who has ever sat down and analyzed scripture for hours like people like him do, so when the anointing is not on me i begin to question my walk with God because he’s very good at pulling things from scripture to assert his points. But i’ve never ever been led by the Spirit of God inside me to sit and analyze the scriptures. I’ve tried time and time again, to memorize scripture, become as knowledgeable as a pharisee, but i never retained anything or was even moved by what i tried to analyze. All i have are about maybe 50+ verses scattered about the scriptures that are touching to my heart (this being the only reason i can remember them) and the anointing of the Lord, and my testimony, and i believe for now, it’s all the Lord says i need. Because: And my speech and my preaching was not with enticing words of man’s wisdom, but in demonstration of the Spirit and of power – 1 Cor 2:4 God uses the foolish things of this world to shame the wise! But i’ve learned also through this experience that it doesn’t mean the wise can’t teach the foolish man that God is using, as some of the things he said to me, the Lord confirmed in my spirit i should pray for these things. For example, he texted to me that one of the fruits of the spirit is self-control, which he said i was lacking. Of course i wanted to laugh him off because of my anointing and inwardly say he’s a blind pharisee and i’m a part of the hidden remnant who really knows Jesus… Read more »

Derrick, well said and well-played, with that discerning spirit judging yourself that you do not allow the least bit of that ‘boastful pride of life’ to creep in on you. That only comes from that honing to a razor sharp edge as Father showed Christine within this prophecy. I have felt that hard pressure also but was not realizing that this is the final ‘touch ups’ , to borrow a word there, that the Ruach haChodesh is doing within us, His body, by sharpening us one against/with another… as iron sharpens iron so one man sharpens another(proverbs, I believe)… that pride kept trying to reach back up and grab me too many times and now it’s made me on the lookout for it constantly.
So, I know the temptation within that to try to pat myself on the back for being so sharp (or whatever excuse du jour the flesh tries to cook up within me daily – I die daily to the carnal nature flesh – feed me with the food that is my portion, O My God, give me neither poverty that I be in want and steal and so profane your Name nor riches that I be full (of pride ) and deny Thee and go into perdition)
Keep up the good fight of faith, saints of the Most High God Omnipotent.

Amen! God is calling His people to get into the best spiritual shape of their life.

Iron indeed sharpeneth iron Prov. 27:17…Thanks for this word Christine , God bless you and your ministry in Jesus name,amen.