You are here: Home » Prophecies » Severe Droughts Are Here and More To Come
https://www.youtube.com/v/cAItBfeXHcE?version=3
Share this post:

Thank you so much, sister Monique! I appreciate what our GOD is showing you, stressing repentance & living a holy life,” before HIM, with WHOM we have to do.”

I will share a Dream that I had on October 22, 2021. (I won’t use the names of my friends that were in the Dream, one was a friend who passed away about 1 year ago from Cancer.)

In the dream, the friend who passed away, she had packed a ‘clear plastic suitcase’ for another friend, (who I didn’t see in the dream, but knew it was her suitcase). In the suitcase were 4 pieces of clothing & a turtle, which had been cooked, but still alive. The turtle had a human face, I picked up the turtle shell, which wasn’t attached to the blob of flesh, which had no arms or legs, it looked like it was in severe pain after being cooked, so I cut its head off to put the turtle out of its misery. End of Dream.

I thought, what a bizarre Dream & thought it was from eating too much chocolate the night before. The next day, I’m reading someone’s dream from 444 News, which kind of sounds like it’s related to my Dream.
_____
Here’s that Dream from 444 News: “A prophetic friend had a dream on the night of Oct 21st of a fiery black horse in a graveyard. There was a carriage with glass windows that carried glass coffins with a skeleton riding the Black Horse, which had a reflection of moonlight on its body. . It was heading out of the big iron gates of the graveyard to pick more people.”

-here’s the rest of the article from 444 News
https://444prophecynews.com/wheels-of-justice-judgement-the-black-horse-trupti-desai/
_____
It took me a little while, to understand & put these 2 Dreams together. In the dream, my friend, who the suitcase was being packed for (she took 2 Vaccines months ago), I think the turtle represents her, who knows what these Vaccines are doing to a persons insides, which in the Dream just looked like a blob of flesh, with no arms or legs, I’ve read many Vaccine Adverse Effects of people loosing limbs.

The clear plastic suitcase, which I seen in my dream, plus the black horse with carriage made of glass & glass coffin, I believe my friend in the dream, packed the suitcase in preparation for the (grim reaper) & Black Horse to take the other friend away.
_____
Months before my friend passed away about 1 year ago, she had a vision while she was sleeping, she said she woke up, there were worms coming out of the holes of her right leg, she tried shaking off these worms from her leg. (Mark 9:48). 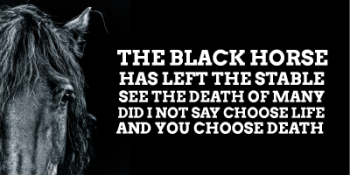 Thanks for sharing these dreams Sarah.

I don’t quite understand the meaning of a glass coffin, glass horse carriage & a clear plastic suitcase (what I seen in my dream, it might have been glass?)

In regards to glass coffins, glass horse carriage, glass suitcase: the word ‘glass’ in general, where is it used in the Bible?

– Revelation 4:6 – “Before the throne there was as it were a sea of glass, like crystal.”

– The sea. It’s curious that John notes the sea giving up its dead. Why not include the deserts, hills, and forests? Why is the sea distinguished from Death and Hades? David H. Stern offers this view: “There is no longer any need for Sh’ol [Sheol in Hebrew is the same as Hades in the Greek], where the dead are held for judgment, since this is the judgment. Nor is there need for death, the punishment for sin, since sin is now being banished from the universe … Likewise the sea, a biblical metaphor for death, destruction and turmoil, harboring fearsome, Satanic creatures such as Leviathan and the beast of Rev.12:18 – 13:8 above, releases its dead for judgment, so that, having served its purpose, it too disappears”

– Before the seven bowls of God’s wrath are poured out in Revelation 15-16, those who are victorious over the beast stand upon “something like a sea of glass mixed with fire” and sing the song of God’s servant Moses (Rev. 15:2-4). We see in Rev. 21:1 that in the new heaven and the new earth the sea no longer exists.

– When all of this is considered, it seems likely that the “sea” of Rev. 20:13 does not refer to the earth’s bodies of water but to the realm of wickedness over which Satan has authority. As Satan is cast into the lake of fire, his influence over the visible and invisible world is relinquished, and those who are willingly enslaved in his kingdom of darkness must now face the harsh light of judgment. Just as Jesus defeats the demonic sea in Mark 4:35-41 and Mark 6:45-56, He now judges the powers of evil before destroying the evil realm altogether.

– The reference to the sea, Death, and Hades does not mean that the bodies of the deceased are kept in three separate places. Rather, these names are metaphors illustrating that all the wicked dead are to be resurrected and summoned before the great white throne.
_____
Read full article:

THE COVID KILL SHOT MAKES THIS WOMAN’S SKIN LOOK LIKE THAT OF A DEAD PERSON!