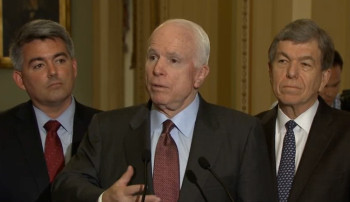 After two and a half weeks of debates and amendments, the U.S. Senate voted today to approve H.R. 1735, which is the 2016 Defense Authorization bill. The vote was 71-25 with most of the no votes coming from Democrats.

This bill authorizes $612 billion for defense spending, but the significance goes beyond our national defense. The Lord showed me in a prophetic dream on March 1 2015 the President’s approval of military aid, which is included in this bill, is the sign to watch for because it will be followed by a sudden dramatic drop in the stock market. I shared the details about that warning in my previous post, The Event Before the Event.

The House version of the bill includes $200 million in lethal military aid for Ukraine while the Senate version includes $300 million for that purpose. The two houses must reconcile their differences before the final bill is sent to President Obama.

At a news conference following Senate vote, Armed Services Committee Chair John McCain (R-AZ) was asked to identify the major differences between the Senate and House versions of the bill and to estimate the timing of when the final bill would be approved by both houses of Congress.

He answered, “I am totally convinced we can get the bill back out of conference in July, and probably early July. There are not significant differences. Our reforms go quite a bit further than those in the house bill, but I have a very close working relationship with the chairman of the House Armed Services Committee and I am confident we can resolve those differences and resolve them quickly.”

So if the differences can be resolved as quickly as Senator McCain expects, the final bill could be sent to President Obama in early July.

However, there could be more challenges ahead because Defense Secretary Ashton Carter is recommending that President Obama veto the bill. Senator McCain expressed doubts that he would have enough votes to override a Presidential veto.

So we still have at least a few weeks to go before the final bill becomes law.

Does it mean the bill is all passed by both house and senate?

The House and Senate have both passed the bill, but now they must reconcile their differences before sending it to President Obama. Yesterday the bill was added to the Senate’s floor schedule for the next legislative day. John McCain said he expected to get it resolved in early July so we are getting close now.

Thank you. Looks like its in a holding pattern

I cant find anything new on this bill.