You are here: Home » Prophecies » America Under Attack » In this season, the Lord is creating an oasis in the midst of deserts. 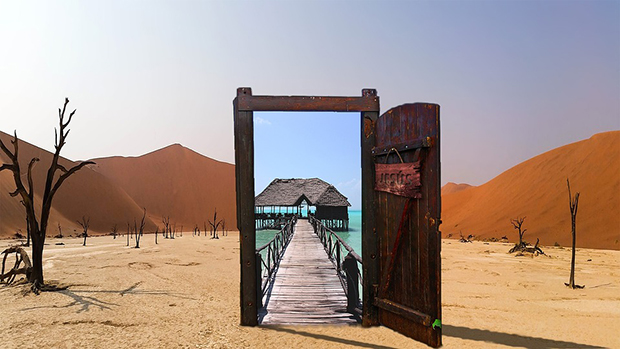 The American church is too busy trying to recreate that which is of the past.

What does that tell us? It tells us that God is continuously in the present. When we go to Him, He never speaks about the former. In fact, there are multiple scriptures that reference not looking back or reflecting on that which is old. (Isaiah 43:18-19, Luke 9:26, 2 Corinthians 5:17).

So why are we trying to recreate Azua Street, Brownsville, or Toranto? Why are we looking at the past to create the future?

America will not see the revival that man dreams and hopes for. America in majority has not repented for its deep iniquities, murders, greed and pride. But more importantly, we seem to not want to face the fact that we are at the end of the age, and that which was written in the beginning MUST come to pass. We cannot change or pray away governmental prophecy.

The truth is that in this season, the Lord is creating an oasis in the midst of deserts, watering wells, for those who truly thirst for that which is righteous, holy and pure. And this will be established for those who do not seek a title nor a platform. He is raising those who bear only His name; those who are willing to go to the highways and byways and declare that the Day of the Lord is at hand.

He will not use those who seek luxury, big buildings, the newest technology, or great lots. He will not raise up those who are concerned with numbers, ratings, or how others perceive them.

We will not conquer seven mountains to usher in the coming of the Lord. This is a lie, not bound by scripture, but by the lust for power in men’s hearts.

In the last days, the Lord is raising an army, a church of Philadelphia; a remnant of men, women, and children of all tongues, colors, and nationalities who have not built their treasures in this dimension, and who love not their lives even into death. These are the overcomers that will be anointed with a power and might that the modern church has never seen. The latter will be greater than the former.

The church of Jesus Christ is not a building, a denomination, nor a country. It is a movement of people across the planet, unified under one Lord, one Faith, and one Baptism. This is the church that the gates of hell will not prevail against. And this church (the true Bride) has already been chosen.

We are in a season of executing the instructions of the Lord. Are you a sheep or are you a goat?

Mena Lee Grebin is a end-prophetess and overseer of Faithful Walk Healing Ministries, which was founded in 2007. Born and raised in Chicago, Mena began having spiritual encounters and heavenly visitations at only the tender age of six. At the age of seven, her calling was revealed to her parents by a prophetess sent to mentor her mother. Through the unction of the Holy Spirit, specific instructions were given on how to raise Mena; which was told would prepare her for a powerful ministry that would be quote, “That of the last days before the return of Christ.” Mena later received the fire-baptism of the Holy Spirit at the age of fifteen. In 2007, the Lord instructed Mena to sell everything and relocate to Charlotte, North Carolina, where He would teach her how to ‘bring water to the desert.’ And now, for over a decade, the Lord has used her in touching the lives of people who are in need of forgiveness, deliverance and healing. Mena Lee Grebin is an ordained prophet and minister. Her spiritual covering and accountability is through Bishops Ralph and Margaret Parker of River of Life Family Church, who’s founder is the late Dr. Lester Sumrall. Mena has Jewish roots through maternal grandparents, from the tribe of Levi.

“America in majority has not repented for it’s deep iniquities”

No, we have not nor do I humbly believe that many in this nation think, feel or believe that we are even a nation of great iniquity. Love is Love. Abortion isn’t murder. Do what feels good. Spend, spend, spend even if we print worthless Fiat currency to indebt future generations. Adulterate our bodies, our air, our food. America, the largest exporter of Filthy Pornography. America, one of the largest Debtor Nations Now. Boys are Girls, Girls are Boys and we shall allow young people to mutilate themselves to prove so. Children no longer attend schools to learn Reading, Writing And Arithmetic; they attend indoctrination centers to learn about condoms and sex in elementary school, how to change their God-given gender without seeking permission from parents, and embracing a victimhood of their choice in order to shout and tear down the white, heterosexual, Christian Patriarchy that has their evil boot on the throats of their existence. Of course, all of this insanity and chaos is to ensure deep division to polarize all of us against one another. Satan IS the author of confusion and many have allowed themselves to be freely conned and duped into believing his Great Deception. America, in the last ten years, has fundamentally changed forever and not in a Godly, good way. The season of Repentance is here, God is waiting for His children to seek Him.

Public schools have always been indoctrination centers and the entertainment and news media are supplementary and continues the “education” into adulthood. Just when a child is able to function independently in thought and action, TPTB separate them from their parents for 30-40 hours a week. Parents are happy to do this because they both often work, or because their children might be difficult and they want a break. Factor in tv/computer time and that’s even more. In all of that time, what are they learning about God, family, Truth? It is an intentional molding of the minds by a state organ. As one generation grows up as “the normal”, the next does likewise and every generation is enabled to drift further and further away from God. I saw this article that I found deeply distressing: https://apnews.com/5af277479f6b469e8f3e8f22c6978d84 Note this: “One of the most wonderful things, too, is he was actually an ordained minister who never mentioned God on his show,” Hanks said…” And then this: “There’s a reason that everybody feels so connect to him right now. I don’t know. Some collective consciousness thing where we all want Mr. Rogers in our life right now, myself included,” Heller said in an interview. “I don’t know if I could have pinpointed what that was when I started out on this journey. But the world feels pretty desolate right now and divided and angry.” No connection is made. Why does the world feel desolate and divided and angry? Mr. Rogers was an ordained minister who didn’t mention God. There is a lesson in that. He was a beautiful man in the program. Where does that come from? Where does any good and loving thing come from? And there is no one who understands. No one who seeks God. Tom Hanks’ quote was like… Read more »

It is a terrible thing that children are not being brought up in the way of The Lord. I wasn’t brought up in a Christian family, however, fortunately, I attended Sunday school from ages 6 to 8. We also had scripture classes in High School. It did make an impact on my life and I’m very grateful for it. I feel sad for the young people that don’t get to hear God’s Word, and are flooded with everything that is ungodly.

How does a nation repent when it rationalizes away its sins? It spends money trying to find “the gay gene”, spends precious taxpayer money funding the killing of innocent unborn children, refuses to lay down her idols of mammon. More faith and trust is put in science and education than in the God of the bible.

I so agree with what Mena has written; was only discussing this very same issue with a close Friend in the US. last week re- Churches wondering why they are not seeing a Revival like in the time of old /past eg. Finney, Evan Roberts etc.. I found this link when I went searching re more on Evan Roberts & The great Welsh Revival..only to see what was the distinguishing features of that movement.
http://daibach-welldigger.blogspot.com/2015/09/azuza-street-and-welsh-revival.html

after studying what is a True Remnant & what is Replacement Theology that has governed a lot of churches over many years….What the Father did in the past we cannot necessarily assume he will do again..this time it is very different.

All praise to him: we can only individually keep praying for people we know of and hope that our witness will help when it get’s really bad. Only the Father truly knows who will turn to him & truly Repent. the Shaking has to occur.. & he wants a pure bride.

Thank you, Mena, for sharing. This message reminds me of the message I received from the LORD, and posted on the 2nd of September. (The message is halfway down the page):
https://latterrain333.wixsite.com/lifeline/post/prophetic-message-a-new-kind-of-church—-foul-play-corruption

Thanks Elizabeth, glad to see you on z3news. I appreciate your YouTube videos, phil. There is a clear alignment by the true prophets.

Great word. It flows from the heart of God.

Impressive and Wise words. God knows the heart of mankind.

Amen and Amen Sis Mena and Lori,
Truth has been spoken!