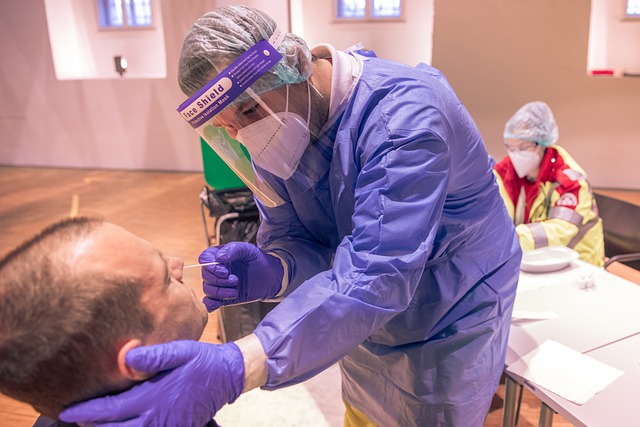 I have yet to hear any explanation for why we’re being required to have a cotton swab stuck 5 inches up our nose and rubbed against the sensitive and permeable cribriform plate that separates our nasal cavity from our brain. This is very odd, especially considering the abundance of scientific research showing saliva samples are at least as effective if not more effective. And there’s no question that saliva samples are much safer because they only require spitting in a cup or swabbing the inside of our cheek.

Scientific research findings supporting saliva testing were published back in August 2020 in the New England Journal of Medicine concluding,

“These findings suggest that saliva specimens and nasopharyngeal swab specimens have at least similar sensitivity in the detection of SARS-CoV-2 during the course of hospitalization.” (Source: nejm.org)

Describing saliva test results as “at least similar” to nasal test results sounds to me like the politically correct way to say it’s actually more effective, written by someone who understands the blatant foul play and censorship of any scientific evidence failing to support Jesuit Anthony Fauci’s narrative.

Other researchers have also found saliva testing is more accurate in detecting the COVID virus. For example, Carolyn Banister, a pharmacologist at the University of South Carolina, conducted her own research and summarized her preliminary findings by saying, “I think that the saliva detection is actually more representative of who is infectious.” (Source: The-Scientist.com)

To make it even worse, the nasal swab test is actually injuring people as shown in the following news report comes from Fox 29 in San Antonio TX.

A San Antonio woman is still in shock after she says a Covid nasal swab test went horribly wrong.

“It hurt, it was an immediate instant migraine,” says Chari Timm. “I’ve never had a migraine ever in my life.”

Chari was in need of a heart diagnostic test and protocol states she had to test negative for Covid before they could run any tests. She says the swab was inserted in her nose and she instantly felt pain.

“It started from the back of my head and just extend it to the front of my head and my entire brain was an extreme pain,” she says. “Instantly fluid just was leaking out of my nose.”

A neurologist from Methodist and an ear, nose and throat doctor diagnosed her with pneumocephalus days later.

Pneumocephalus is when there has been a rupture in the dural membrane, or the lining that’s around the brain, which allows air to enter the space that’s normally occupied by the head.

Experts say it’s rare, but they aren’t surprised it happened.

“Patients are asked to tilt their head back and the trajectory is more parallel to the nostril, the bridge of the nose and that’s what can bring the that swab further up and put you in a range of potentially having that Covid swab then rupture the dural membranes,” says ENT specialist Spencer Payne. (see the full report)

I’m amazed to see millions of people willing to have the swab stuck up their nose without even asking any questions, like mindless zombies. And even more amazed that no explanation for this bizarre testing method has ever been given anywhere by anyone. Meanwhile, the safer and more effective saliva test method is rarely used.

If testing is required, we can show our full cooperation while at the same time protecting ourselves simply by requesting a saliva test, but it’s hard to find testing facilities offering it, at least in my area.

Interestingly, it is no longer at the original web-site, but it still plays at the link above

This is also still available at stateoftenation.co

along with a bunch of other posts related to the sheep slaughter disease C-ovid 19, politics and much more.

I saw this video on Beforeitsnews.com. If this video is legit, seems like it to me, it answers this post and the Theragrippers question. It’s almost 2 hours but I keep watching it because it’s logical and loaded with info. Surprised expat gal hasn’t brought this one out.

The post THIS IS THE VIDEO TO WATCH: INFECTING W/COVID SWAB, THE RNA VACCINE, ARTIFICIAL INTELLIGENCE appeared first on Vaccine Liberation Army.

Where is the link?

I’m not that well versed in forwarding links, etc. I just checked and this video is still up at beforeitsnews.com. I just copied and pasted the heading here.

THIS IS THE VIDEO TO WATCH: INFECTING W/COVID SWAB, THE RNA VACCINE, ARTIFICIAL INTELLIGENCE appeared first on Vaccine Liberation Army.
That is the title on the website. This is a barnburner if u love truth, no kidding..

This is absolutely 110% true. We hardly ever get people asking for a Saliva Covid Test. I’ve only performed “2” since working in urgent care. On one hand the supplies are low for nasal swabs yet we have tons of saliva test kits. Food for thought!

Thanks for the story!!

Given the stakes – masks to cause bacterial build-up and hence bronchial illness, oxygen deprivation to the brain, affecting brain development in the young and accelerating brain degeneration in the elderly, lockdowns to cause chronic psychological problems, as well as people foregoing essential health treatments, and of course the egregious and atrocious complete destruction of swathes of the economy, global restrictions destroying global supply chains with the eventual effect of food shortages akin to famine, uninhibited money printing to cause hyperinflation thus exacerbating the coming food crisis, vaccination programs which scarcely conceal their objective of damaging if not destroying individuals’ health, why delude ourselves? This is nothing short of the elites in the age of robotics operating a mass genocide program. Now we need to press in to God to know what his plans are.