You are here: Home » News » Financial News » Russia Is Going To Pass A Law Formally Dumping The U.S. Dollar 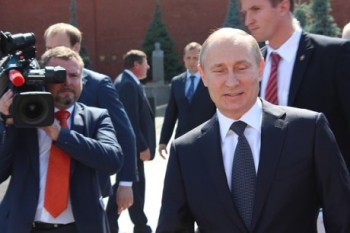 Russian President Vladimir Putin has introduced legislation that would deal a tremendous blow to the U.S. dollar.  If Putin gets his way, and he almost certainly will, the U.S. dollar will be eliminated from trade between nations that belong to the Commonwealth of Independent States.  In addition to Russia, that list of countries includes Armenia, Azerbaijan, Belarus, Kazakhstan, Kyrgyzstan, Moldova, Tajikistan and Uzbekistan.  Obviously this would not mean “the death of the dollar”, but it would be a very significant step toward the end of the era of the absolute dominance of the U.S. dollar.  Most people don’t realize this, but more U.S. dollars are actually used outside of the United States than are used inside this country.  If the rest of the planet decides to stop accumulating dollars, using them to trade with one another, and loaning them back to us at ultra-low interest rates, we are going to be in for a world of hurt.  Unfortunately for us, it is only a matter of time until that happens.

When I first read the following excerpt from a recent RT article, I was absolutely stunned…

Russian President Vladimir Putin has drafted a bill that aims to eliminate the US dollar and the euro from trade between CIS countries.

This means the creation of a single financial market between Russia, Armenia, Belarus, Kazakhstan, Kyrgyzstan, Tajikistan and other countries of the former Soviet Union.

“This would help expand the use of national currencies in foreign trade payments and financial services and thus create preconditions for greater liquidity of domestic currency markets”, said a statement from Kremlin.

For a long time, tensions have been building between the United States and Russia over Syria, Ukraine, the price of oil and a whole host of other issues.  But I didn’t anticipate that things would get to this level quite yet.  It is expected that Putin’s new bill will become law, and this is only one element of a much larger trend that is now developing.

You see, the truth is that Russia and China have both been dumping dollar-denominated assets for months.  The following comes from a recent piece by Mac Slavo…

Last year Russia began unloading massive amounts of their US dollar reserves. In the month of December 2014 alone Putin sold some 20% of the country’s U.S. Treasurys, a move that further increased tensions surrounding what can only be described as economic warfare between East and West.

Then, as if part of a coordinated effort, this summer it was revealed that China had implemented a similar strategy, dumping half a trillion in dollar denominated assets.

But that’s just the beginning of the end for the US dollar. Amid a major meltdown in Chinese stock markets the People’s Republic sold off billions in dollar assets last week in what was reported to be an effort to stabilize their collapsing financial markets.

And now, as Russia’s economy collapses under the weight of American and European sanctions, including what many believe to be widespread downward manipulation of oil prices, Vladimir Putin is sending a clear signal to the central bank of the world’s reserve currency.

China has the second largest economy on the entire planet, and Russia has the tenth largest.  In recent years, these two superpowers have become much tighter.  For example, just consider this headline from Sputnik News that I came across just today: “Crippling US Foreign Policy Draws Russia, China Closer Together“.

And I don’t know if you have noticed, but U.S. relations with China have turned rather sour lately.  Lots of accusations about spying and trade violations have been flying around, and just this week five Chinese warships were spotted off the coast of Alaska.  In the months ahead, expect our relationship with China to continue to unravel.

If China and Russia were to both fundamentally reject the U.S. dollar at some point, much of the rest of the world may choose to follow suit.

So why is that important?

The fact that most of the nations of the world use our dollars to trade with one another creates a tremendous amount of artificial demand for our currency.  In other words, the U.S. dollar is valued much higher than it otherwise would be just because it is the de facto reserve currency of the planet.

As a result, we can import massive amounts of products at super cheap prices.  When we go to Wal-Mart or the dollar store, we can fill up our carts with lots and lots of ridiculously inexpensive stuff.  Our standard of living is way higher than it actually should be.

And because the U.S. dollar is used so widely in global trade, major exporting nations end up with giant piles of our currency which they have been willing to lend back to us at ultra-low interest rates.  This has made it possible to fund our massively bloated federal government and to go 18 trillion dollars in debt.

If the rest of the world stops using our dollars and stops playing our game, we will be in a tremendous amount of trouble.  The cost of imported products would absolutely skyrocket and our standard of living would go way down.

In addition, the federal government (along with state and local governments) would have to pay much more to borrow money which would rapidly create a gigantic debt crisis.

So Russia knows where they could really hurt us.  Most of the “power” that America currently projects around the world is based on having the de facto reserve currency of the planet.  If you take our financial power away, we would be far, far less imposing on the global stage.  Sadly, the truth is that the U.S. military is rapidly shrinking and has largely been defanged by the Obama administration.

A lot of people that will read this article will not understand this, but it is very, very important to keep an eye on this emerging Russian/Chinese alliance.  I believe that it is going to play a critical role in world events during the years ahead.

That should make the USD go up in this backwards world we live in!! —–http://allnews.network/index.php?option=com_content&view=article&id=177:u-s-dollar-and-euro-axed-in-russia-the-first-of-many-currencies-to-fall&catid=37:breaking-news&Itemid=195

It’s not just the U.S. currency that is ready to collapse. Rabbi Jonathan Cahn in his bestselling book ‘The Mystery of the Shemitah’ descibes the rise and fall of empires! On November 3rd 2014 when the new ‘One World Trade Center’ was being unveiled, the Lord quietly spoke these words to me, “It Will Not Stand”, in reference to the new ‘ Trade Tower’. My bible reading that day was in Ezekiel 28 and the Holy Spirit impressed upon my heart, that it is because America has set her heart as the heart of a god, that destructions are determined against her. I asked the Lord for another confirming word with regard to His intentions toward the ‘One World Trade Tower’ and the word He gave me was “Titanic”. Oh how all the proud in and of heart will be cast down…. Beloved, may we humble ourselves through repentance in the sight of the Lord, so that He will lift us up in due time.

WOW, thank you for sharing that. I have been using the Titanic as a picture of the USA, since last year (when I had an active Facebook account). . . but, as expected, was met mostly by “crickets”

God will not be mocked. We have made mammon our God and now God will allow mammon to destroy us.

Our hope is built on NOTHING else, but Jesus Christ and His Righteousness. He is in control..!!..

More sadly, it’s our own fault and doing. We demand servitude from our trading partners. Then we treat them with disdain. Never in the history of mankind has there been a more arrogant nation…….. Pride cometh before a fall. Satan was an arrogant angel. We are the Great Satan.