You are here: Home » Prophecies » End Time Prophecies » Birth Pangs » “The rider on the black horse was galloping through the sky.”
Share this post: 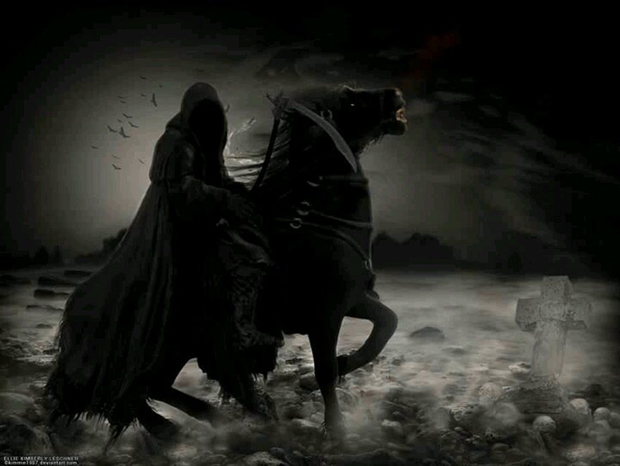 I saw something in the sky that looked like a dark cloud; but very soon it appeared to be a man riding a horse. Both the horse and the man were black. In the dream, the rider on the black horse was galloping through the sky. I watched him through the window of the house where I was staying.

The rider stopped over a mountain, also black, which I could also clearly see through the window. The rider began to pour out something that looked like flaming sparks on the mountain, turning the mountain into a volcano that spewed dark ash. The dark ash began to spread as a wave over the small town underneath it and destroyed all the houses and vehicles in its’ way.

With great awkwardness I watched that dark cloud, as it approached at high speed to the house where I was. I became aware that the dark cloud had come to my house, but I did not feel any quake, nor sound, nor any devastating effects. It seemed that the dark wave of destruction sort of passed over my house and went further on. END OF THE DREAM.

Interpretation:
I think God gave me a very important warning dream, an announcement of the intensification of the birth pangs with increased hunger and pestilence in the world coming as a result of intensive natural disasters now happening all over the world (floods with strong winds, hail, landslides, earthquakes, volcanoes, etc.).

Although I saw how that dark cloud was approaching towards me and my house, I did not experience any fear, disturbance, nor was my house moved. I interpret this as a sign (announcement) that God will protect those who are in Christ.

In the Bible verse in Rev. 6: 5,6 wheat, oil, and wine are mentioned, which are symbolically related to Jesus (Jesus is our Heavenly Bread, the wine is His Blood, and the oil is the Holy Spirit, the Comforter and the Spirit of the Truth, Whose temples we are. So, all of us who are in Christ, are going to be protected, but under the conditon that we remain in Him.)

Also, Psalm 91, gives us a beautiful picture of how God protects His people, who see God as their Fortress and Shelter, so that neither the pestilence neither the arrow nor any affliction will touch them, and God’s people will see with their own eyes how the other (ungodly) will fall and will be destroyed by the tribulations sent to Earth and the sinful mankind.

5 When He broke the third seal, I heard the third living creature saying, “Come.” I looked, and behold, a black horse; and he who sat on it had a pair of scales in his hand.
6 And I heard something like a voice in the center of the four living creatures saying, “A quart of wheat for a denarius, and three quarts of barley for a denarius; and do not damage the oil and the wine.” (Revelation 6:5-6)

Xavier’s goal is to see as many souls get saved, by any means necessary. And I understand: dreams, visions, and prophecies can not only warn others, but help lead others to Jesus. Xavier says, “I’m just trying to be a liaison for the brethren in Christ. I try to help give exposure to people who are claiming they hear from God, who are lesser known, due to the fact very few people see their words, because all they know to do is to share their word in a: comment section on a Christian blog of an author who really isn’t paying attention, comments in a Facebook post, or their own Facebook wall.”

Xavier,
Thank you for sharing your dream. This morning I was spending time with God while I looked out at the sky. I noticed a dark cloud shaped as a rider on a horse. I immediately thought of the third seal opened in the Book of Revelation.

Dec. 10-22 is a crucial watch time for the Harpazo. Look up your redemption draweth nigh. Call on the name of the Lord and you shall be saved.

Possibly related dream I had in the past:

Night of Dec 25 2016
I think there were various scenes, many of which I am unable to recall. I remember I was doing an animation of some kind of logo for Donald Trump. ( This is the second time I have had a dream about doing work for Trump ) I can’t recall what the logo was, but I do remember it having a large letter at the start of it and some smaller letters and perhaps the top half of Trump moving. In another scene ( I think some other things happened before this ) I was outside looking up at the top of a sign at the top of a pole, like a hotel sign would be on the side of a road. I saw at the top of it were 3 signs made for Trump and one of them was the animation I had done for him made into a sign. I was surprised to see it had been changed into a Spanish version. I then saw Trump as he came over to shake my hand for my good work. When I shook his hand it surprised me as he shook it with his finger in an unusual position so that it felt weird to shake his hand. He was smiling and I think he seemed a bit younger than I expected. Then I heard someone saying something like the antichrist was riding around the earth and I thought that seemed like something weird to say and I looked over and I saw a very large black horse moving swiftly around. He had a glow around his feet as he moved so quickly. He was very large and intimidating. I thought of the horses in Revelation as I woke up.

Very interesting dream Shawn. Sounds like a confirmation of end times events unfolding in our generation. Thanks for sharing.