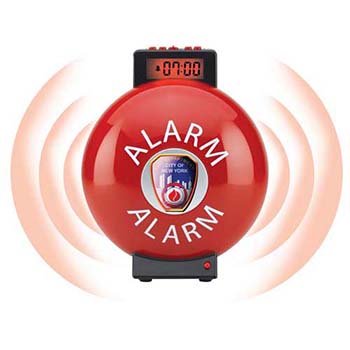 On last Friday’s broadcast of Trunews, on August 11 2017, host Rick Wiles shared an amazing warning about a major event happening soon in the United States.

His testimony began in 1998. A few weeks after publishing a new book called Judgment Day 2000, he attended a prophetic conference where he did not know anyone. To his surprise, a speaker at the event had already read his book and recognized him as the author, so they asked him to stand up and introduced him to the audience.

Published three years prior to the terrorist attacks on 9/11/2001, the front cover of Rick’s book showed a photo of a lightning bolt striking the Twin Towers in New York City.

When Rick sat back down, a woman sitting behind him tapped him on the shoulder and asked to speak with him after the meeting. She later introduced herself as Leah Mandell and explained, “You’re the man that was in my dreams. Two years ago, I had a dream where I saw a man sitting at his computer. He was typing. I saw a book come down from the sky. It went into his head and then came out his fingers and he typed it. Then I saw the title of the book. It was called, Judgment Day. And I have been praying for you for two years, not even knowing who you are, I simply prayed for that man I saw in the dream that God would give him that book and he would fulfill the Lord’s assignment.”

Through that encounter, they became friends. Three years later, on August 11, 2001, exactly one month prior to the terrorist attacks, Rick was driving in his car when he received a phone call from Leah. She said, “Rick, something very odd is happening today. Alarm bells, everywhere I go today there are alarms ringing, car alarms, burglar alarms, fire alarms, even oven alarms, every place I go, I hear alarms ringing. What’s really strange is people are having trouble turning the alarms off. I go into stores, the alarm is ringing. I go into an office, the alarm is ringing. And they can’t get the things to turn off. The Lord told me, ‘Call Rick Wiles and tell him, “The alarms are ringing, and this time, they will not be turned off.”‘”

The moment she said that, Rick’s seatbelt alarm started ringing even though his seatbelt was fastened.

One month later was September 11, 2001. Alarms were going off everywhere in cars, buildings, fire engines, and everywhere.

Three days ago on August 11 2017, Rick was driving to his church when suddenly a dead bird fell from the sky and smashed into his windshield. The bird did not fly into his path, but fell out of the sky like it was already dead. Then he received a phone call from Leah Mandell saying, “Rick, the alarms are ringing. Everywhere I go today, alarms are ringing. And there’s something else, dead birds. I’m seeing dead birds. It seems like everywhere I go, there’s a dead bird.”

Then he realized the date was August 11, the same date when Leah had called him sixteen years earlier with a similar warning.

In the program, Rick and his co-hosts speculated about what the dead birds might mean, perhaps a reference to airplanes falling out of the sky.

Rick’s amazing testimony begins at about the 24-minute mark on Friday’s program.

This warning confirms what I saw in a dream on July 19, 2017, a graph of the stock market, which showed two drops with the second one much bigger than the first. The final part of the second drop ended with a steep plunge, indicating some event had triggered a panic sell off. (see the complete post)

I believe it was the same event author and professor Jim Reeve shared in a video in August 2016. He saw a strong bullish run in the stock market, ending with little green army men on top of a tall pole getting smashed by a large hammer in the sky, causing them to drop to the ground like confetti. Smashed army men falling to the ground sounds similar to dead birds falling out of the sky. So, it sounds like whatever is coming will involve a military conflict.

I believe we are close to this event. The solar eclipse on August 21 marks the beginning of a forty day countdown to Yom Kippur, a day when God’s judgment is set. Forty days have historically marked a set amount of time for repentance, like when Jonah warned the people of Ninevah they had forty days to repent. Yom Kippur this year begins at sunset on Friday, September 29. Amazingly, that timing fits perfectly with what market analyst Chris Carolan calls the dark days, which is when most market crashes have hit bottom, as calculated by the lunar calendar, not our Gregorian solar based calendar. This year, the dark days occur on October 16-17. (see the complete post)

I believe these events are part of what God is doing across the whole earth in this season, birthing a righteous remnant. Not a natural birthing, but a spiritual birthing whereby they are being propelled and empowered to step into their assignments, preparing the way for the return of the Lord. Their birth coincides with the unprecedented sign in the sky on September 23, the appearance of a woman giving birth to a child, fulfilling the ancient prophecy

1 A great sign appeared in heaven: a woman clothed with the sun, and the moon under her feet, and on her head a crown of twelve stars;
2 and she was with child; and she cried out, being in labor and in pain to give birth. (Revelation 12:1-2).

Rachel Baxter saw this event was foretold thousands of years ago, “The fall is coming this fall. Yes, I say it. This fall the mighty fall will begin in earnest and there will be no slowing, just as I have said through My prophets for thousands of years, it will happen. (Isaiah 13)” (See the complete post)

There have been many alarms ringing in prophetic dreams and visions, but I believe everyone will soon be hearing them.

Did you see the recent article about thousands of birds falling from the sky dead in Indonesia?

“But what causes dead birds to fall from the sky en masse? The Arkansas case points to two common culprits: loud noises and crashes.” This quote is from the following the National Geographic, website below:
http://news.nationalgeographic.com/news/2011/01/110106-birds-falling-from-sky-bird-deaths-arkansas-science/

Yesterday around 5pm, someone tried to call me, and instead of the usual ring, ring, ring, it was one continuous riiiiiiiiiiing until they hung up. Only time that’s ever happened. Then around 9pm, I heard a loud alarm at the business next door. Only time I’ve ever heard that in the years I’ve lived here. And both occurred within about 4 hours of each other. Most unusual by itself, but set against the backdrop of Rick hearing alarms, it makes me pay attention. Especially after what happened to me two years ago. I had a very clear tsunami dream (my normal dreamscape is pretty vague & boring), then a couple weeks later, during a Rick Wiles – Nathan Leal interview, I discovered that a lot of other people were having tsunami dreams. I don’t really believe in coincidences anymore…

As I walk to my office in the city I go past the supreme court building and often see judges and magistrates walking to the building usually alone or in groups of 2 or 3. Yesterday I was walking past and I was not really paying attention then I looked up and coming towards me were a big group of judges all done up in their black robes and wigs. Instantly the words came to my mind “judgement is coming!”. I counted them and there was 11.

Great point Nathan. And who better than a former judge, Kamala Harris, to usher in God’s judgment as President in 2020? Just speculating, but it seems to fit.

Maybe, or it could be sooner, as in September 11.

Good article on the upcoming eclipse from a Rabbi in Israel.
https://www.breakingisraelnews.com/93188/major-solar-eclipse-recalling-egyptian-plague-darkness-divine-message-us/#q743daowLrLmibJ7.97

Well .. combining the signs of these prophetic dreams, Hammer in the sky, Alarms going off, Dead Birds falling to the ground.. sounds to me like an aerial detonation of a nuclear bomb. Soldiers around a large pole might suggest Washington monument in Washington DC.
Considering current tensions with North Korea this is certainly a possibility.
They have been expressing their wish to nuke Washington for decades.

Also speaking of something eerie but pertinent, I just got transferred at work to a new store and Im in a section of the store where there are alarms on the doors. Needless to say, the alarms have been going off constantly, much much more so than where I worked before at another store where they never ever went off. Kind of strange in light of this post, very strange as this is the first store in more than 2 years where Ive had to contend with an alarm issue.

I came across this article while searching for something else. Here are a couple of links I was on prior to finding Rick Wiles. These links are about dead birds falling from the sky in Buckeye, AZ…http://www.kgun9.com/news/local-news/dozens-of-dead-birds-pop-up-in-buckeye-neighborhood
And this is a youtube video about it….https://www.youtube.com/watch?v=wNdBX1upTlM

As I was reading this someone’s car alarm went off.