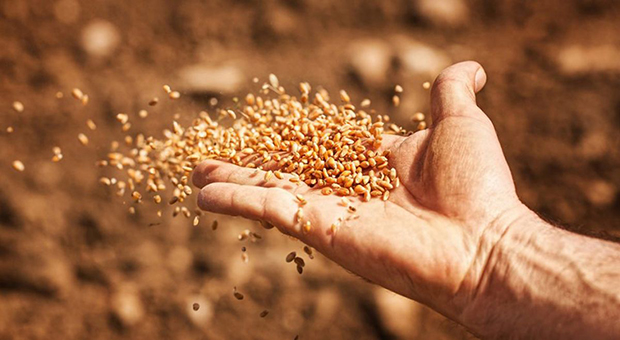 As I was worshiping on the morning of July 1, I received the words of a poem which refers to the release of His hidden remnant.

When a harvest of grain has been brought in, most of it is stored for food. A small remnant is kept or reserved for the next sowing. The farmer does not set aside diseased seed or inferior seed. He chooses seed that is healthy and strong; seed which carries the DNA for an excellent harvest. He saves the best til last.

By this definition, the remnant of God’s excellent seed that is intended to bring forth the final great harvest has been set apart and stored until the appointed time when they are sown by the hand of God in the earth. Until the time of sowing, the remnant seed lies hidden in the seed pouch. Only the hand of God has access to this place and at the moment decreed by the Father, He lays hold of this remnant in His hand and scatters them all over the plowed earth. As they fall to the ground, the clock of Heaven records that the last season of God’s great plan for this earth has now begun and His final wave of messengers have been released.

Before the sowing occurs, the remnant seed has been in close fellowship within the pouch. The sound each one carries has not been heard in the world at large. They are removed from the pouch in order to release a new sound in the earth; a sound Heaven has reserved for this specific time. The other remnant seed has been privy to a portion of this sound as the set-apart remnant has been closely associated in this place of hiddenness. But at the time of sowing, there comes separation and an impartation of power from the hand of God to move each one into place as the wind of the Spirit decides. They are the sons or seed of God led by the Spirit of God and the freshly broken portion of earth they fall to has never seen them before.

Here is what the Spirit spoke concerning this remnant:

My holy remnant
Shut up and stayed
Reserved and hidden
Kept for this day
My holy remnant
Clothed all in white
Pure and holy
Clean in My sight
My holy remnant
Filled with My power
My battle bow
Released in this hour
rightly dividing,
speaking My Word
arrows of judgment
Truth they have heard
My weapon of war
Polished and honed
Carrying My fire
Deep in their bones
Born for this moment
Faces unknown
My holy remnant,
Finishing stone.
Some say apostate,
But this is My Bride
Blessed and broken
Poured from My side
Some call it darkness
But this is My light
Sent through the earth
Filled with My might
Some call it error
But this is My word
Released this moment
Fiery and pure
Some say ‘diablos’
But this is My seed
Sons who are faithful
With whom I am pleased.
My flames of fire
Kindled this night
Torch of My power
Burning and bright
My righteous scepter
Moved by My hand
Bringing My kingdom
Throughout the land.

As a visual learner I could not see what you meant by the YVHV is in the DNA. Sorry could not connect the dots.
Can you help me grasp how this conclusion was made. Thanks…

Your words “seed which carries the DNA” struck a cord in me.

Several years ago the Lord spoke to me and said I had his DNA. Following that a few years later he said I had been given his anti-bodies.

The Holy Spirit has just quickened to me that one interpretation is that the DNA are his children to come. That the Lord will use his remnant to help Him bring his children (and he already knows who they are) into the kingdom.

His anti-bodies is the protection that the Lord will give to his remnant to help protect his DNA.

The Lord has also given his remnant his DNA and anti-bodies so they will stand during the last days from the attacks of the enemy, not only spiritually, but physically. Somehow I sense there is protection to our DNA being given, from the destruction being shown by the enemy.

James words on restoration had a powerful impact on my life this morning.

It was revealed to me that many of the Lord’s people feel abandoned, or will feel abandoned as they face their trials, or will soon face them. One of the last things Jesus faced on the cross was abandonment on the cross. I believe that has prophetic implications for the last days.

There are different levels of forgiveness, grace, abandonment, etc.

Example: Forgiveness
1st – you read the word where it says to forgive, so you make the decision to forgive, by formal declaration.
2nd – you go deeper into forgiveness to the person, by forgiving them in your heart.
3rd – you release them into the blessing, protection, and love of the Lord, no matter what they have done to you. You don’t just forgive them, you bless them.

On abandonment, a deeper level will be reached. I use to know, according to his word he would never leave me nor forsake me, but abandonment was hidden deep inside me from the many trials and rejection I have faced throughout many years.

Now with the deliverance just given to me this morning (without even asking, or knowing it was there) , I am set free from the spirit of abandonment, and now I see the hand of the Lord in everything, leaders of nations, world actions, people, my environment, etc. I see a billion pieces to a chess game all play out by God concerning this world, and every individual. He used Pharaoh, he used a donkey, etc.. I use to know he was in control, but now there is a joining with the Lord in my spirit to rest in him concerning all things He said these words to me just after my deliverance. That He is with me, and we will face the future together. I feel his presence, and there is so much comfort in that.

God’s greatness is so great, our minds cannot comprehend it, how He orchestrates trillions upon trillions of intersections among people and nations.

Thank you for Christine for this post…need to meditate on what you have shared here.
The poem is powerful in its sobering beauty of the commissioning.

“And the remnant of Jacob shall be in the midst of many people as a dew from the LORD, as the showers upon the grass, that tarrieth not for man, nor waiteth for the sons of men.”

“And the remnant of Jacob shall be among the Gentiles in the midst of many people as a lion among the beasts of the forest, as a young lion among the flocks of sheep: who, if he go through, both treadeth down, and teareth in pieces, and none can deliver.”

I love that, Francisco Frontera! Lately, the LORD has been speaking to me in the rain. Last night there was a tornado nearby and torrential downpours. I felt His fury and even His correction in the thunder and the wind. Then the thunder tamed like gentle drum rolls and I could feel His reassurance, but He had to cause the extreme weather to get my attention, as I was looking everywhere but to Him for direction and peace. Sometimes when I’m surrendered to His will, He sends gentle refreshing rain to shower down His Holy kisses on me too, to tell me He is pleased. Life with the Bridegroom is a like a dance, it can be terrible when I step on His toes, or wonderful when I just let Him lead. He courts us here on earth, to give us just a taste of the Fullness of His Promises to come. ?

I was reminded of this scripture, John 12:24

Most certainly I tell you, unless a grain of wheat falls into the earth and dies, it remains by itself alone. But if it dies, it bears much fruit.

I am inclined to believe that martyrdom and the harvest will go hand in hand.

in many cases, yes, Sujit, but the Western church is unprepared for martyrdom. At the very least, we have to learn how to take up our cross daily and die completely to our own plans, desires etc. We are not our own. Only when we have learned how to do this daily will prospective martyrdom not strike fear in our hearts. Scripture says we have died and our lives are hidden with Christ in God, but do we really live like this ?….

You raise a very valid concern, Christine. It is something we would all do very well to ponder often, even as we live out our daily lives.

Amen Sister Cristine , it is all a matter of perspective . As long as a person thinks this life is important , they will act accordingly . Modern society in the west has created a generation of – self absorbed Me people – and because they are all that is important , they are cowards & will always take the easy way . A purpose higher than self is no longer a part of western society and the prosperity gospel has created a me generation in the Church . Till a person understands from the moment they get saved ( step 1 ) they are on a mission from CREATOR , and anything we do outside that mission is folly / self indulgence . No matter if we die or get raptured , we are going to the same place , the only difference is the exit door . Blessings

That was so BEAUTIFUL! Loved the comparison to the seed and God’s remenant people! Thank you Father for this revelation!

That one made me tear up…thank you for sharing!