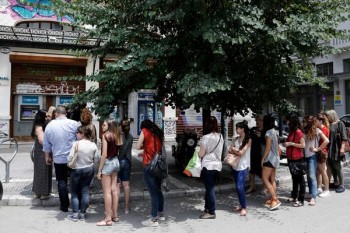 Now is a good time to withdraw cash from checking and savings accounts for the following six reasons.

First, banks pay close to zero interest, so we earn almost zero profits by keeping our money in the bank and we incur almost zero cost for storing our cash somewhere else.

Second, in the event of a financial crisis, bank deposits are not safe because the Federal Deposit Insurance Corporation, which is the agency charged with insuring deposits, only has enough assets to cover 1.15% of deposits, which means 98.85% of deposits are at risk.

Third, in the event of a bank holiday or capital controls, such as already happened in Cyprus and Greece, depositors will not be allowed to withdraw their money from the bank. A bank holiday means the banks are closed and bank accounts are frozen, so no one can access their accounts until they reopen. Bank holidays can last for weeks. Capital controls can restrict banking hours, limit or suspend access to ATM machines, and restrict cash withdrawals to very small amounts per day. In Cyprus, capital controls were started in 2013 and remained in place for two years before finally being removed earlier this year (Source: BBC). In Greece, depositors were only allowed to withdraw 60 euros per day, about $70, and had to stand in long lines to get it.

Fourth, in the event of a financial system crash, credit cards and debit cards might temporarily become unacceptable methods of payment. In that scenario, cash will be king. Those who have cash will have purchasing power while those who don’t will have to do without.

Fifth, legislation has already been passed allowing banks to freeze depositor accounts and then take, which means steal, those funds to bail themselves out. It is called a bank bail-in. Our legislators have betrayed our interests to protect the interests of the bankers, which means we will have no legal recourse to get our  stolen money back.

Six, when a banking crisis happens there will not be time to withdraw cash because it will happen suddenly. This is what the Lord showed me in a dream, which I shared in my previous post, Warning: Sudden Economic Collapse Coming in 2015.

The following comments from Phoenix Capital Research provide insights into how suddenly the banking crisis unfolded in Cyprus:

The most important thing I want you to focus on is how lies and propaganda were spread for months leading up to the collapse. Then in the space of a single weekend, the whole mess came unhinged and accounts were frozen.

One weekend. The process was not gradual. It was sudden and it was total: once it began in earnest, the banks were closed and you couldn’t get your money out (more on this in a moment).

There were no warnings that this was coming because everyone at the top of the financial food chain are highly incentivized to keep quiet about this. Central Banks, Bank CEOs, politicians… all of these people are focused primarily on maintaining CONFIDENCE in the system, NOT on fixing the system’s problems. Indeed, they cannot even openly discuss the system’s problems because it would quickly reveal that they are a primary cause of them.

For that reason, you will never and I repeat NEVER see a Central banker, Bank CEO, or politician admit openly what is happening in the financial system. Even middle managers and lower level employees won’t talk about it because A) they don’t know the truth concerning their institutions or B) they could be fired for warning others. (See the full story)

Capital controls were introduced into the U.S. banking system back in 1970 and have been tightening ever since, especially in recent years. As a result, we are only allowed to withdraw cash in small increments. Please see my previous post, How to Withdraw Cash from the Bank Without Getting Arrested.

What is the good of holding worthless federal reserve notes because they are backed by nothing but the reserves good will. What should you really do with the FRN’s

Nita Johnson mentions the “Obama Freeze” where funds in the banks will be “frozen”.

James, any word on the NDAA that is on Obama’s desk? We are told he will veto.
Looking for the Lord to work it all out! Good word on taking cash out. Thank you James!

He is required to take action by Oct 17 so we will find out soon. He has threatened to veto NDAA every year since he came into office, but never has.

James,
In your opinion, is taking out money in the form of certified checks, or bank checks, a safe way to do it verses taking it out in cash. The certified check is a record that you have that amount of cash in hand. The check can be cashed or deposited in full or in part. Your thoughts, please.

Cash is the ultimate liquid asset, better than certified checks. My guess is during a financial crisis people would likely be even more reluctant than usual to trade their cash for your certified check.

James, if we need to get our money out of the banks now then how are we to use FAZ and forex to make a prophet from this collapse if we’re not able to get to it? Both FAZ and forex I need to go through a bank unless there’s another way that I’m not awear of. In the revelation from the Lord given to you about the collapse happening this year shows we should still have time to get money we made from the collapse of the stock market and the collapse of the franc and convert to silver or gold if silver is unavailable.

My points applied to bank accounts, not investment accounts. Cash will not make profits by itself, so we need investments to make profits. Regarding the timing, I believe we will have time as you stated, but I don’t know how much time.