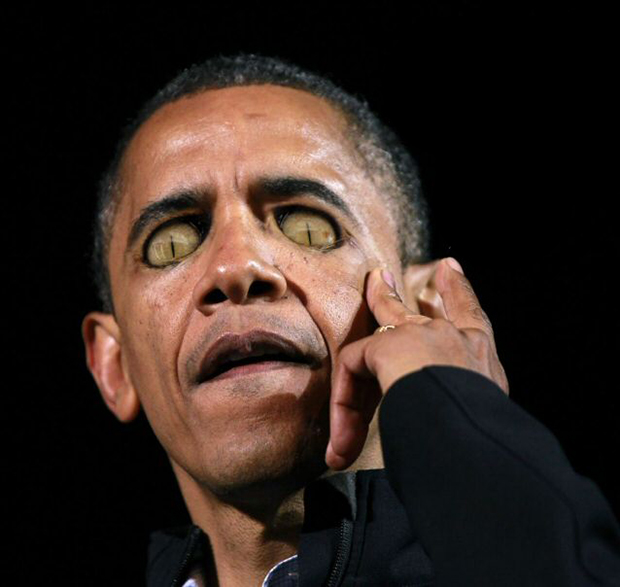 On Thanksgiving Day, November 22, 2018, Amanda Christian received a vision of an evil presence entering Obama. She shares the vision in the 2-minute video shown below, which is transcribed as follows:

“I wanted to share this vision with you. I was awake. It was an awake vision. It was really quick, but in the vision, I saw Obama and he was sitting in front of a desk and he was looking down. Then all of a sudden, he raised his face and it was like this supernatural evil presence entered him. As it did this, he started raising his head back, like he could feel it. Then his eyes started to turn, like a yellow, like a beam of yellow coming out of his eyes. And the pupils of his eyes looked like an animal, almost like snake eyes.

He put his head all the way back and these yellow beams from his eyes were coming out of his head. It was like this evil power entered him. That was the end of the vision.”

There were no dates revealed in her vision, so she might be seeing something in the distant future, but I found it interesting she received it on Thanksgiving Day because it was one day after a turning point forecasted by Economist Martin Armstrong that “tends to produce the major events that are often political in nature.” (Source: armstrongeconomics.com) Martin Armstrong’s forecasts typically reveal major long-term shifts, so the impact does not necessarily show up right away, but maybe the evil presence entering Obama is somehow part of it.

Last night I had a dream where I was talking with Vladimir Putin, the President of Russia. We spoke for quite some time. In a nutshell, Putin said that Obama was put in power to destroy the United States.

Barack Obama and the Media

Last night I had a very strange, violent and disturbing dream about Barack Obama. In the dream, I was staying at this homeless shelter in Riverton, Wyoming (whenever I was hitchhiking through central Wyoming I would stay at that shelter from time to time). There were several people at the shelter. Then Barack Obama showed up—he was smiling, shaking hands with people and campaigning for the Presidency of the United States. It must have been nighttime because I laid out my sleeping bag on the floor to get some sleep.

Obama is NOT fully human and never was fully human. He is a “hybrid” . . . 1/2 seed of Satan and 1/2 seed of human. A Nephalim. He is THE antichrist.
Here’s a confirmation on that vision:
I Saw Obama’s Face Shifting into a Reptilian Form | Z3 News
https://z3news.com/w/i-saw-obamas-face-shifting-into-reptilian-form/

In the 90’s I was with a prayer group in Texas that fought with a group of generational Satanists, 9 families on one road . These Satanists give them self to Satan freely , with knowledge & understanding and serve Satan with more vigor than most Christians and Satan does give them power over the unknowing & sleeping . One wizard could make flames come up in his eyes at will . When people give them self to Satan freely they are given power that only GOD / HIS word can Trump . Obama the evil will have access to the Demonic Realm when he does this , if it has not happened yet . Blessings

If a man is not born again, what would prevent an evil devil from entering him?