You are here: Home » Church » Persecution » Prophetic Timeline Confirmation & Word For The Church – Preach To The Lost, Do Not Take The Mark, Great Deception, Fast & Pray, Persecution, Start of Tribulation, Keep Your Garments White (Caroline Diadem)
Share this post: 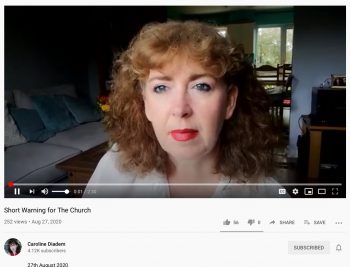 Important Warning To The Church

You have one small window of opportunity left to get out of your churches & preach to the lost. Make it count.

Then the world will be thrown into chaos that you have never before witnessed. It is to bring in The Mark of the Beast and the New World Order. Warn the people NOT to take the Mark but to count the cost of following Me. I am able to preserve those who look to Me.

Great deception is about to take place. Fast and pray in preparation for this or you may not be able to withstand the season that you are in. Persecution will come from your own members. Betrayal and venement opposition.

Stand strong in me! I warned you that in this world you would have trouble. Do not be a blind guide leading the blind.

Take your stand for me Now! Be resolute & unmovable as all hell breaks loose. I will send a sign to you so that you know I am with you.

I love you with an everlasting love.

These are the end of days. The Tribulation is just about to begin. In my love and commitment to you, I warn you.

Get ready for my soon return. Make sure your garments are white and have not become stained by the world and sin. Those who persevere to the end, will be saved!

There will be signs in the heavens above. The sun will be turned to blood on The Great Day of the Lord.

Turmoil begins. Peace shall be removed from the Earth. Peace shall only be found in seeking Me for I Am the Prince of Peace.

Look up for your redemption draws nigh!

Shared by Caroline Diadem from her Youtube Community Page:

I just came across a time line for where we are right now in revelation 14. It also confirms my video ‘short warning to the church’ and confirms Dana Coverstone’s recent videos.
So here it is:

1. The last window of opportunity to preach the gospel. Note, the angel also warns of impending judgement. (prophetic warnings).

Revelation 14:6-7 (KJV) And I saw another angel fly in the midst of heaven, having the everlasting gospel to preach unto them that dwell on the earth, and to every nation, and kindred, and tongue, and people,
Saying with a loud voice, Fear God, and give glory to him; for the hour of his judgment is come: and worship him that made heaven, and earth, and the sea, and the fountains of waters.

Revelation 14:8 (KJV) And there followed another angel, saying, Babylon is fallen, is fallen, that great city, because she made all nations drink of the wine of the wrath of her fornication.

3. The Arrival of the Mark of the Beast.

Revelation 14:9 (KJV) And the third angel followed them, saying with a loud voice, If any man worship the beast and his image, and receive his mark in his forehead, or in his hand, the same shall drink of the wine of the wrath of God, which is poured out without mixture into the cup of his indignation; and he shall be tormented with fire and brimstone in the presence of the holy angels, and in the presence of the Lamb:
And the smoke of their torment ascendeth up for ever and ever: and they have no rest day nor night, who worship the beast and his image, and whosoever receiveth the mark of his name.

4. Judgement coming on the Nations.

Revelation 14:18-19 (KJV) And another angel came out from the altar, which had power over fire; and cried with a loud cry to him that had the sharp sickle, saying, Thrust in thy sharp sickle, and gather the clusters of the vine of the earth; for her grapes are fully ripe.
And the angel thrust in his sickle into the earth, and gathered the vine of the earth, and cast it into the great winepress of the wrath of God.

All of these things are already taking place and are at hand. So let’s stay alert brothers and sisters making the most of every opportunity to share Christ’s message.

I give this word a thumbs up!