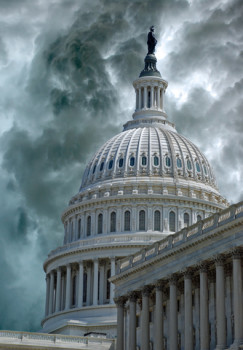 Neither side shows any signs of giving in. House Speaker John Boehner said the House does not have the votes to pass a debt-ceiling increase without add-ons, such as defunding Obamacare. Meanwhile, President Obama says he will only be willing to negotiate after the shutdown ends and the debt ceiling is increased. In other words, give him everything he wants up front and then he will be willing to negotiate.

The Congressional Budget Office has reported that if the debt ceiling is not raised by October 17 the United States will be unable to borrow more money. As a result we will be unable to pay all of our bills, including benefits, salaries and interest, sometime between October 22 and October 31.

In a report released on October 3, the Treasury Department warned about the potential for catastrophic consequences:

“Credit markets could freeze, the value of the dollar could plummet, U.S. interest rates could skyrocket. The negative spillovers could reverberate around the world, and there might be a financial crisis and recession that could echo the events of 2008 or worse.”

An article published today by Bloomberg stated the danger as follows:

Failure by the world’s largest borrower to pay its debt — unprecedented in modern history — will devastate stock markets from Brazil to Zurich, halt a $5 trillion lending mechanism for investors who rely on Treasuries, blow up borrowing costs for billions of people and companies, ravage the dollar and throw the U.S. and world economies into a recession that probably would become a depression. Among the dozens of money managers, economists, bankers, traders and former government officials interviewed for this story, few view a U.S. default as anything but a financial apocalypse. [Continue reading]

So far, financial markets have not panicked over these reports, although they are starting to get nervous. The Dow Jones Industrial Average dropped by 143 points today. Whatever happens in the United States economy impacts the whole world because we have the world’s largest economy. European countries have still not recovered from the 2008 collapse of the housing market in the United States, as shown in my previous post: Four Dark Clouds Are Now Forming Over Europe. An economic collapse here would immediately impact world financial markets and would very likely cause the euro to collapse within a short time.

Given these dangers, it is more important than ever before to draw close to the Lord and get right with Him. The Lord offers protection and provision for those who follow Him with all of their heart. Find out more about how you can know Him.

The stock market has risen almost 500 points over the past couple of days.

Either we draw the line now and even have a debt default or you can choose door numer 2, which is a currency default due to profligate money printing by the Fed (85 billion per month). Hyper-inflation followed by a deflationary depression. So jump off a 30 foot cliff now and break both of our legs, or go up to 300 feet and eventually fall off and die.

Interesting dream Stephen, what a glorious time that would be when the saints go marching in !

James please post if you can. I had a rapture dream last nite. I was not given any date.
But here it goes. I went to sleep and I was dreaming. then I came across this movie theater
that had a movie playing called “THE RAPTURE”. I wanted to go and see the movie BUT I
somehow missed the first showing. After missing maybe two showings, I finally got to
the theater on time.

The movie started. I saw the whole thing. It was like a DREAM within a dream, with the movie
being like another dream. there were people talking about how Jesus would come soon.
Not everyone believed it would happen that quick. But it did. Like lightning, all these people were waiting around and then in the sky I saw these strange looking clouds come in and they covered the area. All of a sudden, many were taken UP into the clouds.

I saw myself in the movie. I talked to some of the people that got left behind. They could NOT understand why all this had happened to them. then they realized they were not saved. they had refused to accept HIM when they had a chance. It was very sad….it was too late, Jesus had come and gone……. the movie ended and I walked out of the theater. A dream within a dream, but very real.