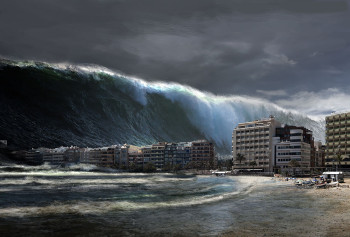 The first warning comes from Terry Bennett. Terry is a prophetic minister who has been shown many things about the future of America and the world.

In April 2011 he received prophetic warning for the area of Vancouver, which is in British Columbia, Canada. He saw this area would be hit by three separate events, including an earthquake, an earthquake with a tsunami, and a volcanic eruption.

I was awakened early morning in April with the audible voice of God speaking the date September 15, 2011. The voice startled me at first, but I listened to see if He would speak more specifically about this date. Nothing was said for the next 45 minutes, though I could look and see this September 15, 2011 date before my eyes.

I continued to seek the Lord about this, and after an hour He began to speak. The first thing he told me was this, “Woe to the West. Look to the West, to the Northwest. It will be a day of sorrow, a day of woe, a day of terror, a time of weeping and wailing. The strength of man will fail him and his arms will hang limp. In the Northwest it will begin, but it will be a sign to California to awaken from your sleep!”

Over the next weeks the Lord encountered me two other times concerning the Northwest of America and the Vancouver, Canada area. He spoke about three different events. An earthquake approximately 40-50 miles south of Vancouver, Canada toward Seattle, Washington; an earthquake and a tsunami 20-30 miles in the ocean west of Washington State and Vancouver Island; and lastly a volcanic eruption North of Vancouver, Canada. I understood this as a triangle of signs from the Lord to the USA. This would precede other events, which have been told to me, but I have not publicly released; however, I will release them soon.

So what about the September 15th date? I believe it is a trigger date at the least, meaning that on or after this date, the Northwest can expect the first of the three events. I believe it will be an earthquake first.  Please pray for the Northwest and our nation.

Terry saw the first event would happen on September 15 2011 and it did. He said he believed it would be an earthquake and it was. At 4:02 am on September 15 2011 Vancouver Island was hit by a 4.1 magnitude earthquake. It was not a large earthquake, but as Terry stated it was a trigger date identifying the first of three events. It appears to have been a warning and a sign that the other two more serious events are coming, including another earthquake that will cause a tsunami and a volcanic eruption.

This word is consistent with an earlier vision Terry Bennett saw on December 25 2010. He saw the following news headline:

I had a dream at the beginning of May 2015. I was in one of the highest buildings in my city which is View Towers. I was on the top floor looking North towards Sidney, BC when I saw a gigantic 200+ foot approximate wall of water. I saw detail to this massive wave, it was a darker blue with many horizontal mini-waves cresting along the surface towards the top. It was powerful and I was in awe and knew there was no time to escape.

It was coming across the Saanich Pennisula towards Victoria, BC and it was higher than the apt bldg. It was approx 30-40 ft higher than the roof of View Towers. (I don’t live in this bldg) I knew I would die, but I thought I could not give up and so I grabbed a co-worker’s hand and started for the rooftop. The wave over ran me, but the Lord saved me.

It made me think that even in impossible physical situations God can and does save us and to never give up doing what’s practical to survive but also count on God to do the impossible.

After this very intense dream I Googled “200 ft wall of water” to see if others shared this specific tsunami dream. I am praying for time for the west coast to have the time and money to move to safer ground, as for me I am staying put until otherwise told by the Lord Jesus.

There have been prophetic warnings for years about a major earthquake coming to California. It is interesting that Terry saw the coming earthquake in Vancouver would precede the California earthquake and would be a warning telling them to wake up. He stated, “In the Northwest it will begin, but it will be a sign to California to awaken from your sleep!”