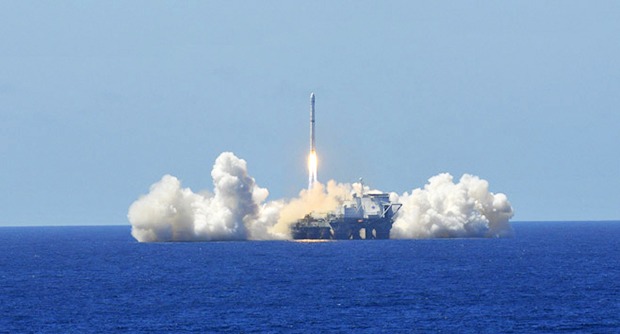 Early in the morning of July 9th, I had a short vision, just as I was waking up.

I saw an aircraft carrier, which I knew to be Russian, and it was in the Baltic Sea. It was foggy. As I was observing this aircraft carrier, a missile, or a rocket, lifted off from it in slow motion, and went straight up into the air. That was the end of the vision.

Interpretation:
A few hours later, I was talking to the Lord about this missile, and He corrected me, telling me it was a rocket. I asked, “Why was it foggy? Was the fog symbolic for being shrouded in fogginess, or was it just a foggy environment?”

He said, “It was foggy because Russia functions in obscurity.”

Obscurity is not a word I am familiar with, so I looked up the definition in, which  is as follows:

Obscurity is an antonym of clarity, along with vagueness, opaqueness, blurriness, murkiness. (Source: OxfordDictionaries.com)

He said, “This rocket will literally be launched from an aircraft carrier.”

I was thinking this was a little absurd and wanted some confirmation, so He told me to look it up online. So I did, and found an article about how this was successfully done soon after WWII. An Iranian vessel launched rockets in 2016. (Source: theguardian.com)

He said, “The rocket that will be launched to bomb New York will not fly over the States, but will come from the Baltic Sea.”

Previously, He told me the next major event would be the destruction of a city in New York, confirming what was given to Matt Smith and Bette Stevens on October 19, 2016.

Then I asked, “Why does the rocket appear to be moving up in slow motion?”

He said, “It wasn’t actually in slow motion. Rockets move slowly when they are first launched.”

I still thought it was slower than in real life, so I looked up a YouTube video of a North Korean rocket launching, and it did actually go the same slow speed as what I saw in the vision. Here is the video:

When I asked the Lord for scripture confirmation, I received Psalm 52 without delay. Now, I am accustomed to receiving confirmation from the Lord, and there are times when I have received it without delay, but this time, I was distracted by my daughter, so I wasn’t expecting to receive anything until later, when I could devote more time to it.

2 when Do’eg from Edom came and told Sha’ul, “David has arrived at the house of Achimelekh”:
3 (1) Why do you boast of your evil, you tyrant, when God’s mercy is present every day?
4 (2) Your tongue, as sharp as a razor, plots destruction and works deception.
5 (3) You love evil more than good, lies rather than speaking uprightly. (Selah)
6 (4) You love all words that eat people up, you deceitful tongue!
7 (5) This is why God will strike you down, seize you, pluck you from your tent
and uproot you from the land of the living. (Selah)
8 (6) The righteous will see and be awestruck; they will jeer at him, saying,
9 (7) “This fellow would not make God his refuge, but trusted in his own great wealth, relying on his evil plots.”
10 (8) But I am like a leafy olive tree in the house of God; I put my trust in the grace of God forever and ever.
11 (9) I will praise you forever for what you have done, and I will put my hope in your name; for this is what is good in the presence of your faithful.

I became troubled in my spirit upon reading this chapter, because I knew what the Lord was referring to, and because the confirmation was received immediately, like the Lord was saying He’s not goofing around. It made me feel like there’s not much time, and I felt really sad. I couldn’t shake the sadness, and started grieving over evil rulers, like the antichrist, being given dominion over the world.

Then the Lord reminded me that even though there will be evil rulers, He reigns and He is in control. I was encouraged by that reminder.

Then on the morning of July 11, the Lord gave me Psalm 63 as further encouragement.

2 (1) O God, you are my God; I will seek you eagerly. My heart thirsts for you, my body longs for you in a land parched and exhausted, where no water can be found.
3 (2) I used to contemplate you in the sanctuary, seeing your power and glory;
4 (3) for your grace is better than life. My lips will worship you.
5 (4) Yes, I will bless you as long as I live; in your name I will lift up my hands.
6 (5) I am as satisfied as with rich food; my mouth praises you with joy on my lips
7 (6) when I remember you on my bed and meditate on you in the night watches.
8 (7) For you have been my help; in the shadow of your wings I rejoice;
9 (8) my heart clings to you; your right hand supports me.
10 (9) But those who seek to destroy my life — may they go to the lowest parts of the earth.
11 (10) May they be given over to the power of the sword; may they become prey for jackals.
12 (11) But the king will rejoice in God. Everyone who swears by him will exult, for the mouths of liars will be silenced.

He spoke up, telling me “I am speaking to you.”

So I am sending this off, knowing the Lord is speaking to me and that He does really want me to share this.

In 2015, the Lord put an end to her studies in chemistry, as circumstances would not allow her to continue. Since then, she has devoted herself to the Lord, and has come to love Him more deeply than she ever thought possible. He has called her to put aside everything to wait on Him and allow Him to prepare her for what He will have her do.

UK expelled Russian diplomats this week. Today, Trump Administration accused Russia of cyber attacks on the US power grid. Some nations are discussing boycotting the World Cup this summer in Russia. One of the older comments below says “Don’t back Russia into a corner.” Looks like that’s what’s happening alright.

I have had MANY ‘bear dreams’ that I believe pertain to an attack by Russia! My latest being a vision of a bear that comes and destroys the land:
https://latterrain333.wixsite.com/lifeline/blog/heads-up-billy-graham-a-sign-get-ready

I had a dream similar to this one Dorothy not too long ago. I didn’t realize it was the Baltic Sea but I saw a ship out in the ocean shooting off missiles. I was out on the sea in a ferry with a bunch of other people and they were panicking, then I saw robots walking around trying to calm the people down. Then next thing I knew we were in a raft on the water because it was everywhere! People were jumping out of their buildings into the water and I was floating on a floatation device, I felt safe but everyone was in Laos in the water not knowing where to go. I live on west coast in Washington state. I’m at peace in the Lord, praise God, He will take care of His own,

Wow, that seems like a very intense dream. Praise the Lord that He takes care of His own and grants us peace. We know we have nothing to fear, as long as we stay under the shadow of His wings. God bless you, Sue!

2015/2016 i worked at an ex military base in eastern germany.
before the berlin wall came down that base was used by the army.
they had similar to scud rockets there which can also be loaded with a nuclear warhead.
because they create a military museum there a lot of ex-military pleople are often there.
their focus was to be highly mobile and invisible.
what i want to say is, the news here, fits perfect their thinking to be mobile and hard to be tracked.

I interpret what Jesus’ insights gave me by reading this article “New York is not a safe place to live as a child of God.”

Could it be the reason a rocket is being fired and NOT a missile is because this whole staged event to come will be made out to be just some missile fired that happened to go off course? Then again, you would think we basically must know where an ICBM would be launched from in Russia and something incoming to the states from the Baltic Sea would sort of be off the radar so to speak? Think how common it is now to hear of N.Korean “test” missiles being fired near Japan, no one really believes one is headed for a town in Japan.

I just read on Steven Quayle’s site that Russia and China are having joint drills in the Baltic sea starting on the 21st. Crazy stuff. Sorry but I dont know how to share it to here.