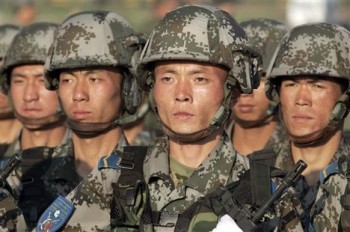 Great trouble is coming upon the earth, and especially upon America, but end-time believers are not victims who cower in fear. Instead, they are part of the greatest army ever assembled in history. These mighty ones will do amazing exploits, exercising great authority and releasing God’s supernatural power in ways that have never been seen before.

The  following prophetic vision is a great example of what the future holds for end-time believers. This testimony comes from evangelist and author Charles Carrin, who posted it on his website. His articles have appeared in popular Christian magazines.

Unexpectedly, I said powerfully in English, “No man of violence will ever put his foot on my property!”

Instantly, in a vision I was transported to my front yard.  Standing before me, as close as the sidewalk, was a band of oriental soldiers, probably 40-50, each dressed in dark-grey fatigue-like uniforms. All carried rifles with bayonets.

In a strong, authoritative voice I preached to them in tongues. I was totally unafraid and my message was defiant, commanding. None of them moved but seemed transfixed as I spoke. Then I locked eyes with each one separately, pointed my finger at him, in tongues ordering him to throw down his gun.  Each one obeyed and fell face-forward  to the ground.

After the last one was prostrated, I waited a moment. Then I spoke again (still in tongues), commanding them to get up and throw their guns in the lake behind my house.  Immediately, each one sprang up, ran past me, threw his weapon in the water, then stampeded back to the street. As they ran past me, I knew that each of them was under the anointing of the Holy Spirit and was rushing away to preach the gospel.

In a moment’s time all of them were gone. “Go!” I yelled after them, “Preach!” I was then back to my senses, standing alone in my house.

This vision not only reveals a coming military conflict with an asian country, probably China, but also reveals the exploits of God’s army. The devil has an army to carry out his plans, but the Lord also has an army who will perform far greater works of power.

The Lord Jesus saw this great end-time army and prophesied about them:

Truly, truly, I say to you, he who believes in Me, the works that I do, he will do also; and greater works than these he will do; because I go to the Father. (John 14:12)

The prophet Joel saw the Lord’s army doing amazing exploits just prior to the day of the Lord, just prior to the catching away of the bride. He saw these mighty ones operating in the fullness of all God has given them, exercising great authority in the earth.

As the dawn is spread over the mountains, so there is a great and mighty people. There has never been anything like it, nor will there be again after it to the years of many generations. A fire consumes before them and behind them a flame burns. The land is like the garden of Eden before them, but a desolate wilderness behind them, and nothing at all escapes them. Their appearance is like the appearance of horses; and like war horses, so they run. With a noise as of chariots they leap on the tops of the mountains, like the crackling of a flame of fire consuming the stubble, like a mighty people arranged for battle. Before them the people are in anguish; all faces turn pale. They run like mighty men, they climb the wall like soldiers; and they each march in line, nor do they deviate from their paths. They do not crowd each other, they march everyone in his path. When they burst through the defenses, they do not break ranks. They rush on the city, they run on the wall. They climb into the houses. They enter through the windows like a thief. Before them the earth quakes, the heavens tremble, the sun and the moon grow dark and the stars lose their brightness. The Lord utters His voice before His army. Surely His camp is very great, for strong is he who carries out His word. The day of the Lord is indeed great and very awesome, and who can endure it. (Joel 2:2-11)

We could have been born at any time in human history, but God has chosen this time for us. We have been given the opportunity to be part of this great end-time army. The training is rigorous and the cost is high, but those who pursue the kingdom of God can become mighty ones fighting in greatest battle of all time. The powers of darkness will be terrified of them!

Thanks to Captain Fletcher for sharing this amazing testimony in a comment posted on Z3news.com.

I was praying and soaking in my office in the Lords presence when the Lord spoke a verse to me out of Daniel chapter 11. “Those who know there God, will be strong and do great exploits.” If you are really close to the Lord and know Him intimately, you will not cower in fear but be stong and do great exploits.” The context of that verse is one in which Isreal was under sever persecution. Judgement is coming, persecution is coming, BUT if you know the Lord your going to do great things. Now is the time to stand. Now is the time to be strong, and watch the Lord back you up because of the promises in His word.

This is awesome! I am part of God’s army, I know God is preparing me in his rmy, I am being trained right now. I know many of you do too.
I have a question: Can we use gun to defend ourselves and our family? I am not aim to kill, only doing things like shooting their legs when they try to attack, so we can escape or protect our food and supply.

I believe we have every right to defend ourselves and our families, both legally and before God.

Great Post! This is foundational Christianity and unfortunately so many in the Church have no idea of their authority in Christ and their ability to walk in it.

Others are having the same dreams and visions. We have no idea of the power within. Let us all ask, seek, knock and receive the love of the Father at deeper measure. Love conquers all. Good times ahead. as we come into greater union.

Jim, you need to download & read the free E-book from Joe Sweet, Pastor of Shekinah Worship Center in Lancaster, CA. The title of the book is “The Resurrection of the USA, prospering in the midst of chaos and disruption”. It’s a short book where he wrote about dreams he had in the past few years about what’s coming to America.

Neville Johnson, Terry Bennett, and Sadhu Sundar Selvaraj are frequent speakers at Joe Sweet’s church. The e-book can be downloaded from http://www.shekinahworship.com