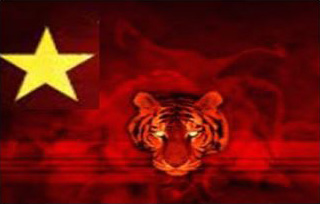 Warnings of trouble ahead are sometimes called red flags. This particular warning is literally a red flag.

For at least 20 years the Lord has been sending warnings that America will fight a war against China. I recently shared a warning about this received by Dumitru Duduman in 1996. See my previous post: War With China Could Be Coming Soon.

I posted that article just a few weeks ago on June 2 2015, but now I am posting again because of a confirmation I received today from Cyndi J. Dana, a visitor to this site. On April 10 2015 she saw a large red flag similar to the image shown above with a gold star positioned in the top left corner. To the right of the star she saw a tiger on a ledge. The tiger was crouching as if ready to leap or pounce. 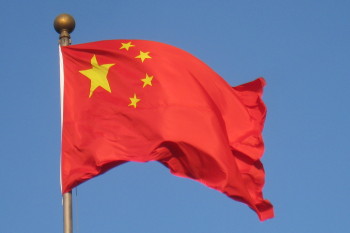 The flag of China is shown here. It is solid red with one large gold star positioned in the top left corner and four smaller stars near it.

Tigers are not found in many parts of the world, but they still exist in the wild today in parts of India, China, and southeast Asia (Source: Wikipedia). So the combination of the flag with the tiger identifies Cyndi’s vision was about China.

Since she saw the tiger ready to leap or pounce, I believe it is a warning China is now preparing for war with the United States. This is supported by their recent actions in the South China Sea plus recent threats they have made in 2014 and 2015.

China is also conducting training exercises preparing for an invasion of Taiwan. The United States has a long-standing agreement with Taiwan to defend them from any attack and to treat it like an attack on our own land. This agreement has been the only thing standing in China’s way from reclaiming Taiwan. China has not been willing to confront the United States militarily, but after decades of building their military they are showing signs of being ready to take a stand against us.

Believers should pray for peace between our countries and ask the Lord to help our government leaders hear these warnings and avoid making mistakes that could cause war.

America should never have invested in China, see they were just waiting for the chance to stab America in the back.
China became rich because of American Business investing there.
I said it year 2001 in different forums that America is making a tragic mistake.
You alienated many countries like the Philippines to move your factories to China an we were wondering, how could you trust Communist China?
What is wrong with you?
You made China rich enough to wage war against you!

Bong, it’s the welfare state that is going to bring down the house and not just in America. The A/C MSM has encouraged this by ignoring it and supporting the socialists. How can any country survive when half the people of working age are on the dole?? People receiving money from the government should be made to work as a prerequisite to receiving a hand out. Our immigration policies are also to blame. If you are white or a Christian your chance of entering America are minuscule. This also adds to the socialist/Democrat vote. Women’s Lib has also fooled the women into going to work at the detriment of their children and marriage.

According to Rick Wiles on today’s broadcast of TruNews China is on their way to join Russia and Iran in the fight against ISIS. (United States)). Russia has warned the U.S. to get out of Syria. Rick Wiles has a lot to say today and believes it could be the start of WW111. PLEASE LISTEN to his program today. Pra! A surprise attack is coming on the U.S.

” I want to have a decent idea of how Americans could be treated if their country was at war with us ” …… internment camps if you’re lucky. We did it, why wouldn’t they ?

Ko,
I have had similar thoughts about China. I studied there for a semester two years ago and feel like there is tons of potential reaching people for Christ, enjoying mastering the language, living safely for a season, etc. …Though it is something I need to pray about. Also I want to have a decent idea of how Americans could be treated if their country was at war with us. Any thoughts are appreciated.

I believe the Lord told me that He will keep me from His judgment, wrath, natural disaster, famine, etc. However, I shall suffer persecution from men for His name. I think Lord may be calling me to actually go to China. Any thoughts about China? At least, it won’t be attacked by other countries. But I imagine probably severe governmental oppression on religion; so the church would be underground. I hope I have the courage when it comes to that.

Two signs given b y the angel to dumitru duduman for right before US invasion were that China would attack Taiwan and there would be people fighting the gov. Then Dumitru questioned the angel and the angel backed it by this. He said the next day, someone will pay your rent, bring you a car and a bucket of honey and pay your rent. All 4 things happened the next day just as the angel told him. How’s that for confirmation! I also have had several deams of ww3 at qwakeup.org some of which have physically manifested signs to them as confirmation, agreeing with dumitru, henry Gruber and the prophet Jonah Ben noah, al l in agreement.

daniel that is impossible. only about 180000 tons of gold has ever been mined

this may be in future but IMO not near future. I work in China, but reside in SE Asia know members of politburo–I do not see this prophecy coming about now. Agree with one of the poster–it may refer to asymmetric warfare (i.e economic) as China is indeed sick and tired of the corrupt economic system that exists now and they are taking steps to replace this corrupt model as they see it. IMO The whole South China Sea thing is really over blown by the media. I will not say why exactly but will share cryptically. Who toppled Qaddafi and where is his 144 tons of gold? Who sent in Blackwater mercs and staged coup in Ukraine and where is their 31 tons of gold? Who according to Karen hudes holds the world’s gold supplies to the tune of 1.8 million metric tons? When you discern the answer you will know why south China sea is getting so much press and why it is being used to gain access to naval ports and military posts in region.

Then, The Lord come back with His angelic army to beat the evil Nordics anti-christ alien force wtih earthly human military. The Battle Of Armageddon.
Just a little thoughts.

I think it may be the NORDICS hybrids I saw in the dreams, they were really ordinary human looking.
The article said these NORDICS aliens shut down US and Russia’s nuclear weapons and facilities. And enemy of the Greys. This is one of my theory: Could the Nordics aliens pretend to save the world by preventing a coming nuclear WWIII, stop the war, defeat the greys, then, they become the saviors of the world, afterward, they start giving out new suggestion of a better and new financial system and cure for cancers and all other good things to humanity. Therefore, setting a stage of take over, people will be deceived and willingly give the authority to them. Then, that’s when the anti-christ government come out. The anti-christ could be a Nordics alien in totally human body or a selected Nordics/human hybrid. Everyone will be cheer they have a savior, the Jews and Muslims and Catholics and some Christians will think he is the messiah. Therefore, the peace treaty will be able to sign, the third temple will be built.
The beast hate the Babylon. The Nordics hates the greys, we may actually facing an alien war in proxy style unfolding in world affair.

Give me your thoughts, I love to hear different opinions.