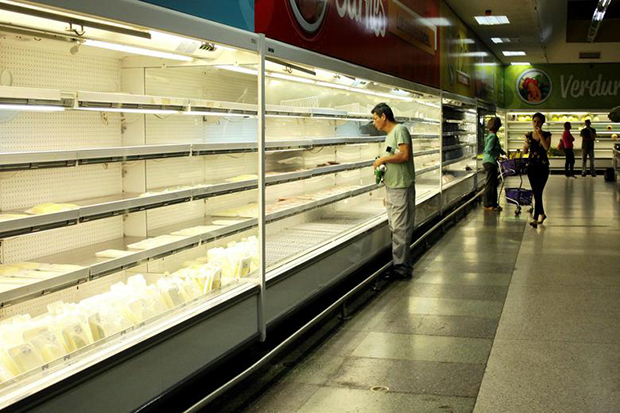 Lately, as I have been reading all the news about the possible food shortages, the LORD has brought back to my mind all the dreams and visions that HE has given me through the years. We are beginning to see this all starting to happen, and that is why I am sound the ALARM again for people to prepare.

We are actually beginning to see these ‘warnings’ in different stores such as Kroger’s Supermarket and Walmart:

“Due To Poor Harvest Season, We Are Experiencing Shortages on Many of Our Canned Vegetable Items. We Hope To Be Back In Stock on Most Items By The End of August”

“Due To Limited Availability, We Are Experiencing Product Shortages Across This Category. We Are Working Closely With Our Suppliers To Get These Items Back As Quickly As Possible.”

Here are a few dreams and visions that I have had in the past that are warnings of the upcoming FOOD and WATER shortages:

I had a flash dream that I was walking past a small grocery store on a city block. They had their shelves displayed out on the side walk, but they were completely empty of all food except for a small bag of apples. This was a warning that we will be seeing empty grocery shelves in grocery stores.

I saw a little, old, poor-looking man coming down a hill carrying a heavy sack of potatoes thrown over his back.

In another dream, I saw writing in the sky. The word that I saw was: “POTATO.” This was the first ‘potato’ dream of many that I received. For a few months I did not understand why the LORD kept showing me ‘potatoes’ in my dreams. Then the LORD led me to the potato famine that happened in Ireland in 1845-1852, called “The Great Famine”. It killed approximately a million people.

In another dream, I was in a grocery store at the check out counter out with my husband. The lights were barely on and it was hard to see—it was if the lights were being powered by generators in an emergency situation.

As the lady was checking out our grocery cart, I noticed how it was so full with food that it was over-flowing. I then looked behind me and saw this LONG line of people behind me waiting to check out as well. However, they were all carrying their food in their arms and had no grocery carts. I could see that they were struggling with their arms full of groceries and some dropping on the floor. They seemed very anxious for us to hurry up and I could feel their anxiety and frustration. Then suddenly, I knew that my husband and I were the last one to buy so much food, and that we were the last ones to use use grocery carts. Now I understood why everyone was fretting at us. The new ‘law’ seemed to be that you could buy the food that you could carry and no more because of the upcoming shortage of food. End of Dream.

In another dream, I saw an old rusty wheel barrel. It was turned upside down, so I went up to it and flipped it right-side up. When I did so, I saw a huge pile of maggots piled up underneath it. I understood that the wheel barrel stood for farmers and his crops. The old and rusty one showed that farming had stopped because there were no more crops to farm. The maggots showed that the crops were eaten or destroyed by some crisis or drought.

In another dream, I saw an empty grocery cart rolling down a HUGE mountain. It started slowly at the top, and starting picking up speed the further it went. Then I saw it starting to tumble over some rocks and then fall over a cliff far down, crashing into a distant valley. This represents that there will be no more groceries to buy.

In another dream, I saw a old fashion wooden water bucket like the ones used a hundred years ago to fetch water from a well. First, I saw the front of it like in a picture, but then it started rotating around and became 3-D. I then noticed that it did not have a bottom to it. When I awoke, the LORD told me that this was a sign of a water shortage/crisis.

7 For nation will rise against nation, and kingdom against kingdom. And there will be famines, pestilences, and earthquakes in various places. (Matthew 24:7)

5 When He opened the third seal, I heard the third living creature say, “Come and see.” So I looked, and behold, a black horse, and he who sat on it had a pair of scales in his hand. 6 And I heard a voice in the midst of the four living creatures saying, “A quart of wheat for a denarius, and three quarts of barley for a denarius; and do not harm the oil and the wine.”
7 When He opened the fourth seal, I heard the voice of the fourth living creature saying, “Come and see.”
8 So I looked, and behold, a pale horse. And the name of him who sat on it was Death, and Hades followed with him. And power was given to them over a fourth of the earth, to kill with sword, with hunger, with death, and by the beasts of the earth. (Revelation 6:5-8 NKJV)

Hi again folks Z3 readers.. just happened to find this 26 min video Titled Food Shortages It has begun. watching the first 5 mins or so, this man says some interesting things. some maybe interested to watch & listen to the video.

I highly recommend this book:

This gives a good overview of how incredibly vulnerable are those who live in large cities. One little known fact is that due to high inventory costs, food purveyors have very little inventory compared to 50-60 yrs. ago.

I too, have had these types of dreams concerning food and water shortages, to the extent of famine. The research I have done indicates there will be world wide water shortages by 2071. That said, this does not include the possibility of natural disasters that could push this date up considerably. I am including links to two of these.
http://propheticdreams.home.blog/2019/07/31/no-drinking-water/
http://propheticdreams.home.blog/2019/07/23/an-electrical-storm/

reading this post & watching the video
I had seen few weeks ago someone else was concerned re the state of the crops.- pictures of the same.
I happen to look @ another site occasionally & had noticed a post that read: Heading was dated July 5th :TIME OF GREAT HUNGER. – need to seek Heavenly Father earnestly as people concerned re their futures what they will eat, & where they will live etc. But Father God says I will guide my children if they seek me, those who can hear HIM NOW – SOME TO STORE UP GRAIN SOME TO BUILD SHELTER, SOME TO BE SKILLED FARMERS & HUNTERS.

A TIME OF GREAT HUNGER COMING IN THE FUTURE FOR ALL THE WORLD. THIS PERSON- GLYNDA LOMAX SAW IN THE SPIRIT THAT SOMETHING HAPPENS TO THE OCEANS AS WELL WHERE THE FISH IN IT CANNOT LIVE AS BEFORE. SOMETHING MAKES THE H20 UNLIVABLE FOR THEM & THEY DIE. .Glynda writes Precious little food will abound & what is available will be controlled by the wicked in this time. Believers GUARD YOURSELVES AGAINST TURNING AWAY FROM THE FATHER ( she saw He meant denouncing him in return for food. ) We will need to Focus on him & He will Supply our needs Verses. Rev. 12:12., Mathew 24:7, Mathew 6;24-26 Rev.6:56 .
1) Readers comments.. Live on West Coast; professional Salmon fisherman confirmed, ALL the internet you tube vids of 100’s & 100’s of miles in the ocean of “dead zones” They have all the latest Sonar & go out for a month or more @ a time far out into the ocean. Normally would be swimming with Salmon & albacore tuna, & he said NO TUNA & only 4 Salmon.

2)Fishermen in Oregon/Washington say there is no Herring- here the kelp beds are dying which means no abalone, urchins which sea otters need & their pups are starving to death, sharks are getting Psycho & going after surfers & kayakers.

3)Farming in Illinois/ Missouri it is BAD! No planting now & much of the wheat from last year that people are eating in todays bread Supply has been destroyed in the Floods. ?? Bread could jump to $ 8-9 a loaf.

Reminds me of a Z3 post by Christopher Harris-? 2018[.re Bohener: who is a Catholic & friend of The Pope plus Obama. Christopher Harris had a vivid dream re green & gold colours.. then I was reading an end time article where this Senator Bohener went to a Jesuit school, played touch football. etc now he advocates Businessmen getting involved in The New Green Gold Rush which is Marijuana.
Much to Pray & seek the Lord about ; take to Him in Prayer..

Sister Anne , Glynda had a vision in 2011 , I have never forgotten . She saw an old woman stirring a pot in a field . The old woman was so hungry Glynda said you could see the madness in her eyes & excitement of having some food as she stirred the pot of dog entrails . I have never been able to get that vision out of my mind . The LORD has only given me one waking vision in my life , it was of the Black Horse of Famine coming to America . Blessings

John Paul Jackson spoke of a blight on GMO crops as well as water becoming more precious than oil (cities relocating for lack of water).

Do you have any insight as to what cities will be safe in the future?

The Lord has told me that there will be several safe havens in Eastern & Central Nebraska. The Missouri River will offer some physical and spiritual protection from the East during the times of crises.

Cities wont be safe due to civil strife due to any number of reasons not the least of which is food shortages. Smaller towns and rural areas probably safer. Central Tennessee is known for the prevailing winds that should keep nuclear fallout mostly away. Perry Stone is in Cleveland. Many have fled to the Ozarks, with Jim Bakker set up outside of Branson. Some places in the rural west might be okay especially if the rains return with the solar minimum.

Ali, at the following website, you can see Chuck Youngbrandt’s map of 5 safety zones, the safest being the Ozark mountains of northern Arkansas:
http://whygodreallyexists.com/archives/40-confirmation-dreams-of-war-coming-to-american-soil

We live in Indiana and many of the farmers here gave up on their corn crops this year as their opportunities to plant kept getting rained out. Many of them has expressed that they don’t remember a season like this. I’m definitely watching and waiting to see if next year’s planting season is more of the same. If they don’t recover over the next few seasons, much of our local food sources will dissipate, which I believe could be the beginnings of food scarcity.

the rise of the gay community (lgbtq) , is the sign of the coming of the mystery woman, revelation 17
,