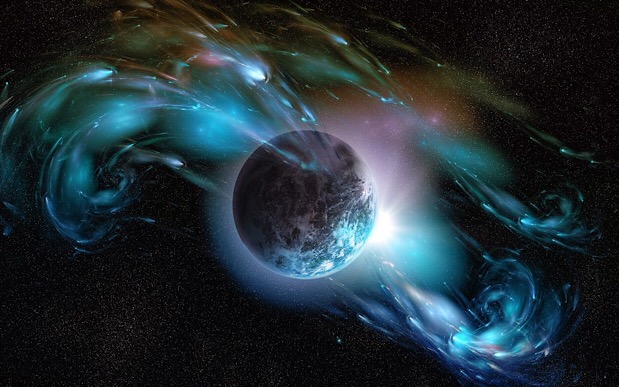 On November 10, 2017 I received a ‘flash dream’ where I saw a weatherman on TV. He was standing next to a large weather map, giving the weather. However, instead of hearing his forecast, I heard another voice (the HOLY SPIRIT) saying, “Flip-flop of temperatures, colder during the day, warmer at night”

After I woke up, my first thought was that something severe and unusual was going to happen with the weather. I didn’t get a full interpretation of what this meant, until yesterday while watching two of BP Earthwatch’s videos. (links below).

He believes we are witnessing the beginning of a pole shift, which will bring an increase in the number and severity of earthquakes around the world. He also believes the strange ‘booms’ being heard all over the world are related. (Source: dailymail.co.uk)

So, this word I heard about the weather flip-flopping points to a pole shift where the axis of the earth reverses, bringing the ‘opposite’ affect on the weather and temperatures. Upon further investigation, I found that even NASA has predicted a possible ‘pole shift’ coming: (Source: watchers.news)

My next warning dream I received in the early morning of November 22, 2017. In this dream, I was driving down a two-lane road at night. Cars were in front of me with their red lights on and cars were passing me as well. I was passing by some homes on both sides and could see lights in their windows.

I started noticing my car was acting strange. First, the steering wheel became stiff and hard to move. Then the brakes weren’t working right, and the lights on the front dash panel were blinking. Just as I was wondering what was going on, my car completely stopped. Not only did it come to a complete halt immediately, but all the cars in front of me and next to me did as well. I then noticed that ALL the lights were out everywhere. The homes went dark, as well as all the car lights.

My first thought was we’ve been hit with some sort of an EMP. I wasn’t scared, but I felt very inconvenienced, knowing I was at least 5 to 10 miles away from my home. I then felt that I was to get out of my car and go and share with the other people that we had been hit with an EMP. End of Dream.

When I woke up, I didn’t realize this dream could be connected to my previous dream. Upon further research of a pole shift, I realized it can cause an electrical disturbances on the earth as well as space. That is when I realized that both of these dreams could be related — a pole shift that possibly could take out parts of the electrical grid.

“The alteration in the magnetic field during a reversal will weaken its shielding effect, allowing heightened levels of radiation on and above the Earth’s surface. Were this to happen today, the increase in charged particles reaching the Earth would result in increased risks for satellites, aviation, and ground-based electrical infrastructure. Geomagnetic storms, driven by the interaction of anomalously large eruptions of solar energy with our magnetic field, give us a foretaste of what we can expect with a weakened magnetic shield.” (Source: watchers.news)

I believe that what BP Earthwatch is pointing to is a confirmation of these two warning dreams. In the last days, we will see changes on the earth and in the sky. There will be earthquakes so severe, mountains and islands will be moved from their places. (Revelation 6:14). Also, Isaiah 24 describes what looks like a pole shift.

“Behold, the LORD maketh the earth empty, and maketh it waste, and turneth it upside down, and scattereth abroad the inhabitants thereof.” (Isaiah 24:1)

18 “For the windows from on high are open,
​​And the foundations of the earth are shaken.
19 ​​The earth is violently broken, the earth is split open,​ the earth is shaken exceedingly.
​​20 The earth shall reel to and fro like a drunkard, and shall totter like a hut; its’ transgression shall be heavy upon it, and it will fall, and not rise again.” (Isaiah 24:18-20)

As we “watch” and start to see prophecy unfold, let us rejoice because our redemption draws near as we wait for the ultimate return of the LORD JESUS CHRIST, coming for HIS BRIDE!

The LORD has shown me that HE gives these warnings so we can seek HIM for mercy, asking for the disaster to be either negated or minimized, and also to inform us to what is coming, so we won’t be caught ‘unaware’ or unprepared. HE wants us to be prepared BOTH physically and spiritually.

“Let us be glad and rejoice and give Him glory, for the marriage of the Lamb has come, and His bride has made herself ready. (Revelation 19:7)

Watch therefore, for you do not know what hour[fn] your Lord is coming.’ (Matthew 24:42)

Elizabeth is a wife, mother and special-ed teacher…..however, her most important role is as a follower and disciple of the LORD JESUS CHRIST. In 2010 she started receiving prophetic words and dreams from the LORD and frequently shares them on her LATTERRAIN333 Youtube Channel, as well has her LIFELINE LETTER Blog:
LATTERRAIN333 YOUTUBE CHANNEL:
https://www.youtube.com/user/LatterRain333/videos
LIFELINE LETTER BLOG:
https://latterrain333.wixsite.com/lifeline

For those who are interested, she also has a Dream Forum for people to share their prophetic dreams:
DREAM FORUM: https://latterrain333.wixsite.com/lifeline/forum

My husband had a dream when he was 9. He is almost 63 now. It was not a Salvation experience, but a revelation of his call as a watcher. He was unchurched. In the dream he was at his grandmother’s house and walked outside. Her door faced east. He came out and turned facing north. He looked up as the sky’s were rolling open and the Lord was returning as described in Revelation. He never felt the dream to be accurate as the Lord returns from the east. However, in considering a possible pole shift, I recently asked him if that shift would turn his grandmother’s house where N would now be E. He thought about it for awhile and said yes. I know I’ve rarely met anyone who has been watching as he watches. He started long before computers. He just sees it all and all the connection. He’s also had many near death “accidents” where he was miraculously protected.

Based on watching his life and his call, there will be a full shift by the time the Lord returns before the thousand year reign. My opinion.

What a great confirmation. Thanks Sarah.

I’ve been sensing that I need to get more candles and batteries for our flashlights. Also my inner man has me really moving hard to finish up on preparing for what’s to come in 2018 and beyond. But the main prep is getting our spiritual house in order……

My wife and I were at Wholefoods Market yesterday and going to another section of the store I went through the wine section, as I pass the wines on my right side, I happen to glance at one of the wines and the name is Earthquake. A few bottles down a wine bottle caught my attention, the name is Boom, Boom, Boom. I went back to make sure I was not just imagining things, I wasn’t. A confirmation?

We need to make a distinction here between the magnetic poles and the geographic poles. Earth’s magnetic poles alternate, and some believe it is time again for the north and south magnetic poles to reverse. In times past (it is believed), a fast change would have taken an entire human lifespan. Such a change in poles is not understood to be related to weather or earthquakes. However, nobody was around (presumably) the last time this happened, so nobody really knows. As the end gets closer, I suspect there will be many new things happening that will turn science on its head.

A shift in the geographic poles is a different matter altogether. The planet spins at a speed (at the equator) of about 1000 mph. As you move north or south, that speed goes down to where at the poles it is essentially zero. If the planet is suddenly turned upside down, there would be 1000 mph winds at the equator that would be 700+ mph in the USA. I hope the phrase in Isaiah 24:1 is a metaphor, like in Acts 17:6 (KJV). If not, the power grid will be the least of our problems as everything will have been blown away.

That’s true. And magnetic pole shifts aren’t any less dramatic…I saw where the changes may affect how much cosmic energy may reach the surface of the Earth, how electricity works (not an EMP, just changing currents) and some speculate the changes in the magnetic/electrical fields will affect how people think. Which may explain how people are experiencing “the Mandela Effect.” Maybe their memories really are being affected, but not by changes in history due to time travel.

John Paul Jackson spoke of summer and winter weather in the same week.

Last night in Grandview MO we heard 2 very loud boom sounds that sounded like it penetrated a very large area. Nothing has been reported. They were about 2 minutes apart. Then this morning I look here and saw this.

Thank you for sharing your warning dreams, Elizabeth. I’ve been following related some information online myself — no dreams, just a sense things are going to change soon.

Severe weather (colder and longer winters plus greater summer storms), volcanoes, and earthquakes probably go along with this. Not supernatural judgments, just part of the changing earth.

On the morning of 7-24-10 I had a dream/vision that where I saw two rows of 4-5 dancers ..
And they were dressed the same orange yellow.gold out fits …there costumes were like soldiers you’d see in the nutcracker..
They started singing and kicking up their legs(like the rocketts )do..
Singing .. ” It’s the end of the world as we know it!”
That was it and popped open my eyes and got out of bed. It’s been the about a week now I’ve been feeling that the Holy Spirit was pressing me to share this message..
I’m really feeling immensely any time any day we are going to see suddenlies take place..
We’re in the falling right now with the political , geographical ,religions(leaders &pedophillia)
Economically cosmos and more …
Crumbling down…

This is similar to what Rick Wiles was talking about this past week.

Here’s a rabbi’s theory for the unexplained booms being heard worldwide: http://www.wnd.com/2017/11/rabbi-sees-messiah-behind-mystery-booms/

Interesting article–thanks for sharing! The first thing I thought of when I saw the reports of these loud ‘booms’ was the fallen angels coming to earth from Revelation 12. It seems like it could be spiritual, since there is no explanation or physical evidence whatsoever. Apparently even the authorities are even ‘scratching their heads’ on what it could be.

Yes who knows but that it could have something to do with CERN opening a portal for this to happen. Shortly after reading your post I got the rabbi theory email, but outside of this have not heard about these booms.