You are here: Home » News » Financial News » Prophetic dream warns of trouble getting money out of banks.
Share this post: 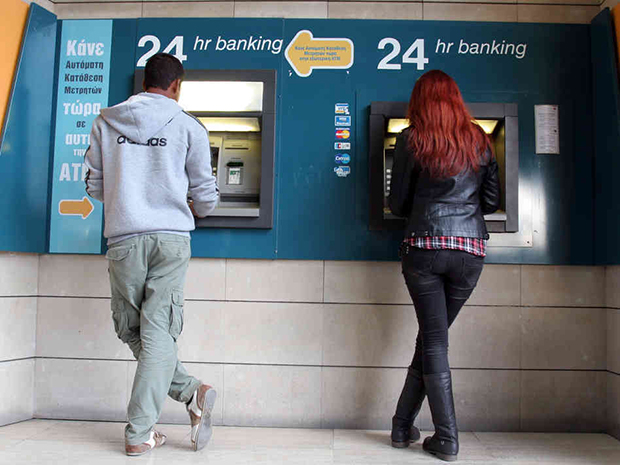 Z3er Michelle Gibson sent me this dream yesterday, which she received the night before.

I had a dream last night that I had gone to an ATM at a bank with a friend. As I was putting my pin number in, a man came up from behind me looking over my shoulder. I told him, “Please move back.”

He replied, “I did not do anything wrong Michelle.”

I told my friend, “He just got my information from my card because he should not know my name.”

Then this man knew that I knew he had my information, so he took off running. Then another man suddenly came up to me and was trying to get my information, so I went inside the bank and told the teller what happened. The teller replied, “Here, fill this out.”

Then she gave some kind of temporary card. I left the bank and found my husband and told him what happened. He wanted to go back to the bank, so we went back to the ATM and he put in his card, but instead of getting money out, it spit out a card that looked like the temporary card the teller had given me. So we went into the bank and asked the teller, “What is going on?”

She gave us the run around and closed her window because the bank was closing. We kept talking to her anyway. Then a man opened the teller window back up and asked us, “What’s the problem?”

We told him, “Our old cards did not work and neither did these new ones.”

He looked at my card and said, “Well, this card does not work because it is all bent up.”

Then he started cutting up my card, so I told him, “Well, your machine did that to my card. I did not do that. I just want my money out of the bank.”

He replied, “You will just have to wait until we figure it all out.”

I was so angry with him and told him, “I did everything right, just like you said. Now give me my money.”

End of dream. It just seems this might be a warning of a bank crash.

I saw banking withdrawal limits placed on the accounts as people try to withdraw everything in panic after the collapse.

Im sharing a vision from last night
All of a sudden i was seeing Morgan Freeman standing in a dollar tree store.
Im trying to figure out what this excactly means

Kathleen, Morgan Freeman is a very wealthy liberal who has repeatedly used the bully pulpit of his fame to criticize the president and conservative values. The image of him standing inside a discount store like Dollar Tree makes me think that the coming economic collapse will cause even wealthy liberals to do their shopping, at least for a time, in discount stores because their standard of living has been reduced so drastically. It could also symbolize a lack of preparation for the future collapse, and the idea that they have gone from riches to rags.

Thankyou Frank for your input

Interesting. I am thinking perhaps once this happens, assuming, the currency will then change as well.

Thank you Jesus and sister Michelle for that prophetic word. When reading that post it actually reminded me of a dream I was given months back of seeing a man at a counter desk with what appeared to be a bank card and that was cut. The man behind the counter had then whispered in the man’s ear some words that I could not properly hear…it was like he was confessing some secrets things to him. I was with a man who had like a small machine that looks like mobile atm hang up to his belt. Then well after, I started to hear from Holy Spirit not to keep any fund at bank. When reading that word, I now have a confirmation that the word that I have heard actually comes from Holy Spirit. In 2015, I have lost all my wealth when the devil has come after me but I also know that God is actually at work to bring back what was stolen from me. I have heard from Holy Spirit how I now need to plan this but I need to pray more over it. As for now, I am keeping the few I have handy not at bank and since 2015, God has taught me how to grow our own foods and how to rear animals…is he trying to tell us to prepare us like this…I know that some of us will be chosen to feed others during the great depression…some will feed others in a supernatural way…multiplication of foods same like Jesus did when he first walk on earth. These days I am hearing lots these 2 words Market Crash. I do not know the timing but most probably God wants us to be prepared.

May the Lord our God in Jesus name, bless us with more insight from him and prepare us in due course for us not to be caught by surprise. Amen.

Cards didn’t work because they want people to be marked with the 666 (brainchipped) to get their money, digital currency can be controlled to make people do what they want real currency they can not and yet so many people are using this digital money.

Oh what about those pin hole type cameras thieves use to obtain your ATM pin code? Watch out, I always cover the hand Im punching the number code into the keypad, shielding my input hand from any possible overhead pin hole camera a thief may have placed there.

I was living in Mexico in 1982 when the peso was devalued, resulting in a 50% loss of buying power vs. the dollar. I thought I was safe by depositing my money in a Mexican bank in dollars instead of pesos. Wrong. I was literally part of a bank run. Long lines of nervous people at the bank. When I finally got to the teller, I told her I’d like to withdraw my dollars. She said, “of course, but FIRST, we need to exchange your dollars to pesos at the NEW exchange rate.” I was shocked. Same thing happened to all of us. I got half my money back. After that, prices shot up, my rent was increased by 50%, and so on. One thing I learned about a financial crisis is that any rule can be broken. The banks can do anything they decide to do. Buy food, silver, ANYTHING but leaving paper money in a bank, because when the time comes, you could end up with NOTHING.

Sorry about that, Frank. I was at the other end of that situation when I was a kid and vacationing with my family in Mexico at the point in time before they raised prices. We went to a nice mens’ suit shop and I bought a three piece suit, a shirt and tie all for $20. I was collecting a whole bag full of large peso coins like if it was Halloween candy, until some poor cleaning lady stole it at a hotel. 🙂 My dad left her a pamphlet about the 10 commandments. 🙂

I got mixed up in Mexico on a vacation and didnt interpret a menu correctly concerning the meal cost in new pesos vs. old pesos, another obstacle and source of confusion.

Thanks for the heads up Frank. we try not to keep much in the bank ourshelves

Frank – I dont understand how you would have lost 50% of your USD even with converting it first to a 50% devalued Mexican peso against the USD, and then converting it back to USD for you to take out of the mexican bank. It was the Mexican peso that had dropped in value/weaker versus the USD(not the USD)
If the Mexican peso was devalued 50% against USD, it means you would have gotten twice as many pesos from your USD and then if you immediately convert them back to USD you will have the same amount of USD.

Ah, the answer is very simple: They just made up a new rule to FORCE depositors to convert their deposited dollars to pesos at the new rate, and THEN convert those pesos, now devalued by 50%, back to dollars. There was absolutely no other way to do it. Everyone was just shocked that they would do this, both Americans AND Mexicans who thought they were safe by having their money deposited in dollars. Wrong. This is what I mean by TRUST NO ONE when it comes to finances, especially in a devaluation or economic collapse situation…banks and governments can make up any rule they decide on, and there’s NOTHING you can do about it, EXCEPT to buy tangible assets ahead of time…

On second thought, maybe what happened is they forced us to convert our dollars to pesos at the OLD rate, then to re-convert our devalued pesos to dollars at the NEW rate…either way, it was a dirty trick, and all I know is I left the bank with about half of what I had deposited…

Thanks for sharing this great warning Frank.

Sister Michelle was given a new card , could this be a currency change I wonder . The new & old card don’t work , so they have no value seems to me . This would indicate a total collapse of the banking system . Blessings

Fascinating video based on research on the Feasts, Scripture & more……

Something seems ready to happening this week, exactly what, remains to be seen but we are in high watch times for the signs……

Thank you for sharing this compelling revelation!

as i am right now very busy can somebody sum it up in 3 sentence?
i would be thankful.
i started listening to it but it´s hard to follow while working.

She shows how November 9th could be the 3rd day, Exodus 19:11 & John 2:1. There was a wedding on the 3rd day. She believes it could be the Rapture. I think it is very significant for all the amazing research she shares but do not know what this signifies.

I think it is wise to have at least 1 month of bills in cash. Small bills.