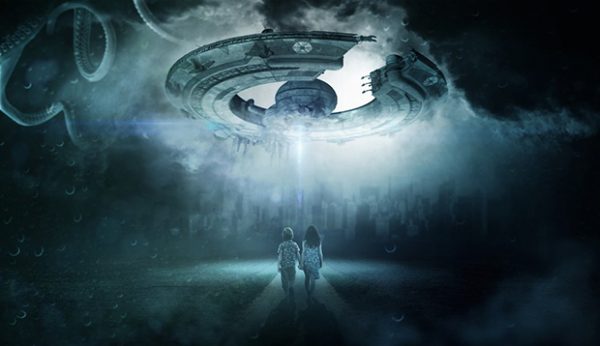 In a dream on June 20, 2021, I was in a room in a large fancy house with a high ceiling that was about 20 feet tall. I knew the house had been infiltrated and that evil people were coming to attack the house. I also knew that I needed to protect some important items and hide them in a large bag.

I went into a room that was like a large fancy bedroom. I placed a bag of my belongings, a thick bedding blanket, and another soft white item within the large bag. I tried to seal it up, but the bag was very full and it didn’t close completely. I shoved the bag under some wooden furniture by the bed and I knew it would be safe.

I started to leave the house because I knew it was my best option before the enemies came. I kept walking and I arrived at a large open field of grass where I talked with some people. We were hundreds of feet away from the house and I knew that the attack was coming very soon. Then a group of black floating alien ships appeared in the sky about half a mile away. I knew they were evil and were abducting people very quickly and that those people were gone. I was very concerned and knew that I needed to leave this bad place. Then the dream ended.

I don’t believe in the existence of aliens from other planets so I think this dream was warning about demons masquerading as aliens and attempting to attack people on earth through abductions. Some places will not be safe as demonic forces try to control the population. Please join me in praying against this evil.

In addition to the demons always living on our planet, Revelation 12:4 suggests there could also be demons coming from other planets.