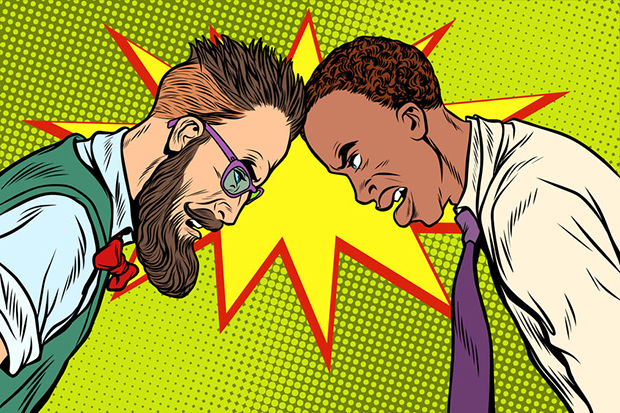 In a dream two nights ago, I saw a terrible wide-scale civil war between blacks and whites raging throughout the United States. For whatever reason, none of us seemed to have access to guns, so the war was being fought with knives and it was gruesome and bloody. The fighting seemed to go on and on with many casualties. I recognized the knife I was holding as a steak knife from my own kitchen.

At one point, a man in our camp was very troubled by what he saw, so he started questioning whether or not it was right to participate in the fighting, even for self defense. His views were not well received so there was division even within our own group.

Although I was participating in this war in the dream, I would not do so in real life. I believe the purpose for this dream was to sound the alarm so we can avoid this tragic scenario by recognizing we are being led like sheep to the slaughter by demonic entities seeking our destruction. By getting us to kill each other, the culprits operating behind the scenes to pit us against one another keep themselves hidden while we do the killing for them.

What I saw would not be possible in a nation walking in keen discernment, the kind of discernment which God has promised to give to all those who walk uprightly before Him. (Proverbs 2:7, 2:9-10, 8:20, 9:9, 15:28, Ezekiel 44:23) It could only happen if we are deceived, believing Satan’s lies, which are daily bombarding us in the news media, movies, TV programs, government policies, and sometimes even coming from our pulpits. Satan does not care how he divides us. Any topic is fine with him, whether it’s our race, income level, religion, political views, sexual orientation, or anything else. These emotionally charged topics are continuously presented to us, demanding us to choose sides, but it’s just bait to divert our attention away from the only choice that really matters, Christ or antichrist. If we can keep our focus on the right topic, we can defeat Satan’s schemes because he only advances under cover of darkness, so by exposing him to the light as our true enemy, we are united together stronger than ever before, so his schemes are defeated and we can avoid what I saw.

Those who live in the realm of their intellect are continuously engaging in endless debates that ultimately accomplish very little and more often just cause division, but those who live in the realm of the spirit soar high above all those earthly things to connect with others on a heart to heart level that always produces good fruit because they are empowered by the irresistible love of God.

Collage of Lois Vogel Sharp’s prophetic words from the Lord for 2019;
US economy, Gold, Silver, Earthquakes and more: 1:14 min.
https://youtu.be/DFia-5qynJo

Thanks Serge, she just posted another one and on Tishrei 23 of all days.

Listening to this Podcast by Glynda Lomax- titled: Vision- America under Siege – really important info for now- comments section interesting; good comments ;one comment as u scroll down also re Henry Gruver…it says has gone home to be with The Lord. ! tears welling up… any one else know this??
Did not know where to post this one.. but Glynda in the 19 mins says people unhappy with the gov’t for certain things. .warnings re food. & plague.

plus G.L. mentions re deadly Winter? this one 2019 or 2020 also concerning visions. thinking of all the Remnant in the US. & in other places.. very disturbing times.

Thanks. This actually “confirmed” many things I was told a couple days ago, but I’m never 100% sure I “hear” correctly.

I don’t know whether it’s just the chatter surrounding Trump and world events, but there has been a greater sense of urgency lately. It was always urgent, but more so lately. Things are changing/advancing at a much greater pace. Or that is what I perceive.

Reading everyones comments they are all so important..my quiet time looking @ a few things ..& re reading all these comments my brain started ticking again.. went to Before Its news site & found some important headings

1) This video.. 35 mins.
https://www.youtube.com/watch?v=21EyKDeAaqU exposed UK.-GCHQ- Obama plan to destroy Trump.
2) Oct 31st. – The planned Global Economic collapse & the start of The great tribulation. warning!.
3) US. marines activated for an emergency in the US. -which will come with little warning.
4) Steve Quayle Alert: Important Update on President Trump activating the marine core. ….
5) end time cabal headed by George Soros, Barack Obama & Hillary C.- Reason Pope Benedict suddenly retired.
Things escalating rapidly… important to stay close to Jesus Christ & the Father( Holy Spirit) Pray & fast for his wisdom in this late hour. Joel chapter 2. .
nothing will turn this all around.. the world has to go thru it.. Fathers word tells us so. .book of Daniel, Jeremiah, Mathew Revelation.

I believe in your dream the reason the fight was shown to be between “black” and “white” was to depict that this/these war(s) will be a viscous fight between the darkness (black) and the light (white). The weapon we primarily use to fight with will be a “knife”, the Sword of the Spirt, a weapon we cannot buy but comes from within our own “kitchen”, our own heart.

Thought I believe that both civil/ revolutionary wars will be fought with the “knife” the Sword of the Spirit which is the Word of God, preparation for both will be somewhat different. Both wars will need us to have a deep and close relationship with God, knowing His word with our full trust in Him to reveal the reality (truth) on what to do and how to do it in every situation. To “provide for our family” wether it be food, shelter, guidance or security (physical protection) will be just as important to survive and thrive in these coming days.

However, to be even more prepared we should all take CISM (Critical Incident Stress Management) courses as well as CERT (Community Emergency Response Teams) courses. These courses are pay courses but will give us the training to take the lead in both the civil/revolutionary wars that are upon us.

There is a price in being prepared; it is called our-time and our-money.

Thanks for this interesting alternate interpretation. I agree civil war is coming in both realms, but I think my dream was revealing civil war in the natural physical realm because of the gory details, which I did not include in this post due to concerns people might think I would participate in such fighting in the real life, but I would not. In the dream, I was engaged in one bloody fight after the next, stabbing people with my steak knife and seeing all the gory details with much blood and seeing my knife cut through my victims. As soon as one fight ended, I was on to the next one. It was very stressful and seemed to go on and on. At one point, I bragged to one of my friends that I had killed at least fifty of them. So I think the gory details were included to show the horrible nature of the coming civil war and the callousness of the hearts of those who fight in it. My participation must have been meant to represent someone else because I have nothing but love for people of all ethnic backgrounds. I care as much about skin color as shoe color, totally irrelevant.

We have to continue to pray for repentance, mercy, forgiveness and healing so that the dream does not become a reality in the natural realm

James, your dream brings to mind a question about which I think about on occasion. When everything collapses and the the rule of law is no more, there will be gangs of evildoers, murderers, rapists, thieves, and all manner of motley crews roaming the streets unimpeded. At this time there will be a need to fight back as you did in your dream. Now, you stated that you would NOT participate in such fighting in real life but I often wonder if it is permissible/acceptable to fight back, provided we are provoked to do so and there are no other alternatives. We do, after all, have the right to defend ourselves, as well as our family, friends, food, and other items necessary for survival.
Now, I am aware that this is a different situation than being beheaded for refusing to denounce Jesus Christ as our Lord and Savior and bow down to the Anti-Christ. I would expect (me, personally) to allow myself to be led to the guillotine and executed without any struggle.
So, what say ye to the first situation? I’m curious what you and other Z3ers would suggest as the best course of action in the given situations.

Great question Dockster. Perhaps the dream is showing the desperation of those dark times that even those who have no animosity toward any ethnic group will be forced to defend themselves and even get caught up in the horrible fighting. I can only hope that is not the right interpretation because I would rather die than do what I was doing in this dream.

James, I agree with you on the not wanting to do what you were doing in the dream. However, in a real situation where “the rubber hits the road,” perhaps people don’t truly know how they will react. It is said that a dangerous situation does not make one a hero, it merely brings out what is already in a person. In other words, we may not really know how we will respond in a given situation. As for me, I’m single and have no one to fight for so I don’t know what I would do in a “life or death” situation. I would like to know that if an inner “Terminator” arose in me, I would be justified in defending myself. Also, I don’t think the “ethnic group” of the perpetrators will make a hill of beans of difference. It will be strictly “life vs death” and not “race vs race.”

Reading this report Dave Hodges re a Coup.! much important info.

The map with the different colours showing is interesting ; so is all the information contained in the article.