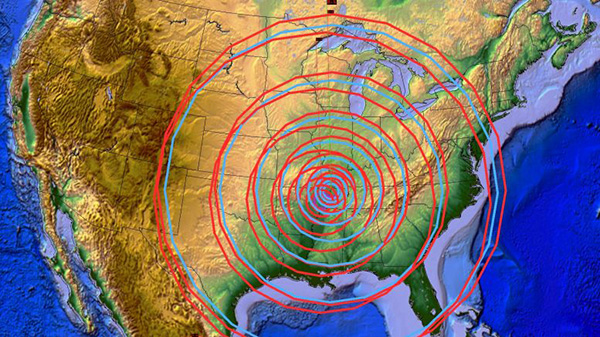 In November 2016, I dreamed I was with a bunch a people and somehow I  knew we were in the southern part of the U.S.A.  We were all standing outside, almost frozen with fear as we waited.

There had been a HUGE earthquake in the north and we were all filled with dread knowing we were about to feel its effects. It seemed like we were to be the last location that was going feel it coming.  I told everyone to hang on.

Then, all of a sudden, while waiting for this earthquake to happen, I had a vision within the dream.  I saw an outline map of America.  I didn’t see the state lines, but only the outline of the U.S.  Then, the map zoomed to where the earthquake started and I saw a black dot pulsating on the epicenter.  The dot was in the upper part of the middle of the country, however,  I wasn’t sure of which state.  It seemed higher than the New Madrid fault. Then I saw ‘9.5’ indicating the level on the Richter Scale. I was not given any dates or timing.

I believe this dream has a couple of interpretations—dual meanings:

I believe this earthquake might have to do with the New Madrid fault and a massive earthquake occurring that will shake the whole country.  A few days after the dream, I saw the U.N. voted for a two-state solution in Israel. The LORD then reminded me of this dream and I knew it was related.  So, I believe this has something to to do with the division of Israel.  Whoever divides HIS land will comes in harms- way according to Scripture.

I believe this is about a great divide coming (and has already begun) in the U.S., as we see the lines between good and evil become more and more distinct.  This earthquake could unleash more civil unrest in our nation, our communities, as well as within our own families. JESUS said a house divided cannot stand (Mark3:25). I believe that also applies to a nation.

NOTE:
The largest earthquake ever recorded was in 1960–a 9.5 in Chile.

“I will also gather all nations, and bring them down to the Valley of Jehoshaphat;
and I will enter into judgment with them there on account of My people, My heritage Israel, whom they have scattered among the nations; they have also divided up My land.” (Joel 3:2)

“And if a house is divided against itself, that house cannot stand.”  (Mark 3:25)

“I looked when He opened the sixth seal, and behold, there was a great earthquake; and the sun became black as sackcloth of hair, and the moon became like blood.”  (Revelation 6:12)

I have been amazed by the number of Millennials with dreams about tsunamis, earthquakes, and zombie invasions. Their dreams are terrifying, personal, and unstoppable. Whether literal or figurative, yes, these are wake-up calls, custom-written to the life of the individual dreamer. In real life, whether it’s old age or cataclysm, few people are ready to die, and intimately connected to the God of eternity, and therefore able to truly live.

A. Ayer
Reply to  Gerard

My son had a “zombie” dream just last night. He has incredible prophetic dreams–but doesn’t realize it. His dreams are very profound, in ways that he can’t really understand yet (he is 19). His dream was that he was at a local ski resort, and it had been “nuked”. There was no snow, and about half of the people there had been turned into “zombies”. I tried to get him to tell me more, but he didn’t want to talk about it, as it was disturbing. I personally am waiting for a nearly immediate response from God to Obama’s abstention from the Israel vote. But I am also praying that God will withhold his response, as Obama will (hopefully!) be leaving that office soon, and a man friendly to Israel will be stepping into office.

Matt NZ
Reply to  A. Ayer

Sister Barbara (Godshealer 7 on Youtube) gave a prophecy of a plague of hail (The plague of Egypt will be revisited).

1 Tevet is also the date that Esther was taken to the palace of the king setting the stage for her saving the Jews 6 years later.

It’s coming VERY SOON due the UN vote against Israel and we did nothing. The shaking I believe in the next 2-3 months

Look where the greatest eclipse point is for the Aug 2017 eclipse.

Hey Matt, also check out this article by my dear friend and prophet called to America in which he shows the 2017 and 2024 eclipses will cross America and intersect at the heart at the point where a scroll containing the Jeremiah prophecies has been dropped into the river as per Jeremiah 51.
https://serayah515.wordpress.com/2016/07/11/a-land-the-rivers-have-divided/

Thanks for the link Alison. I’ll check it out.

There is another Pastor talking about this, Paul Begley, I have attached his you tube video, this might explain the earthquake, which could come this month due to stuff going on in space. It’s very interesting –

The social media sharing plugin we were using was malfunctioning so I disabled it. I will try to find a new one that works.

I once watch a video on you tube from a young men from Mexico. He said there will be a big, big earthquake coming to USA. The big earthquake will trigger two more earthquakes. Follow by the earthquake water will contaminate the land and famine will come afterwards. He did not said when it would happen but he sense it was soon. I believe a pastor from Puerto Rico also had a dream where he saw the sword of God penetrating the map of the USA and broke the land in half. I believe he said this will happen when the USA votes to separate the land of Israel. Since November 13th, I have seen 9:11 on my cell five times. I usually see 1:11 or 11:11. But this is the first time I see 9:11on my cell or elsewhere.

Hello Elizabeth
Thank you for that information. I did not know that those numbers meant judgment. I connected 9:11 with the twin towers destruction. Also, the emergency number to call is 911. God bless!