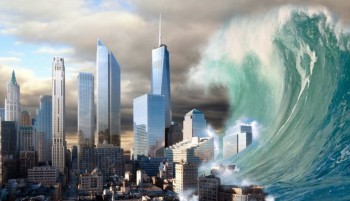 Early in the morning of July 14 2014, I had a dream that I was with other people outside.  I was facing them and they were all facing me. Suddenly I saw the look of terror on their faces as they looked up behind me. I turned around and saw a huge tsunami. It appeared to be about 11 stories high! It was about to crash down upon us.

I only had a moment to glance up, then I leaned in to the rocky cliff-like area I was standing next to. I started praying and praising God. The tsunami was at my back at that moment. I looked up and saw it was still at my back and crashing above me, but there was an area of protection that surrounded me and stopped it from touching me. I knew it was the LORD. He did not allow the water or waves to touch me at all.

As I stood there leaning on the rock, even as I was surrounded by the water I was still able to look up and see the blue sky because the water and waves were not allowed to go near me. All of it went completely around my little area!

The next moment I became aware that people were getting ready to have a funeral for me because they thought I had died in the tsunami. The tsunami had passed and I was now up on top of the cliff sitting in the backseat of a car. I stepped out of the car and yelled down to the people, “I am alive! I am alive!”  They were astonished. Then I woke up.

Then I went back to sleep after a while and had another dream.

In this dream I was in what appeared to be a classroom or church setting. I saw myself writing down what I had just dreamt about the tsunami. Then I put a star to the left of it and wrote “CRITICAL” near it.  I had several other things I wrote, but dreaming about writing down the tsunami dream let me know it was significant and important.

What I sense is the tsunami represents something that is going to come upon the earth suddenly, unexpectedly, and that nobody can stop. The rocky cliff is the Lord. Those who lean on the Lord for His protection are going to see whatever is coming, but it will not harm them. Even in the midst of the trouble, they will see clearly through to the heavenly realm because of their relationship with the Lord.