You are here: Home » Babylon » Antichrist » Prophetic Dream Reveals Image of Idol in the Sky Causing Fire to Fall to Earth 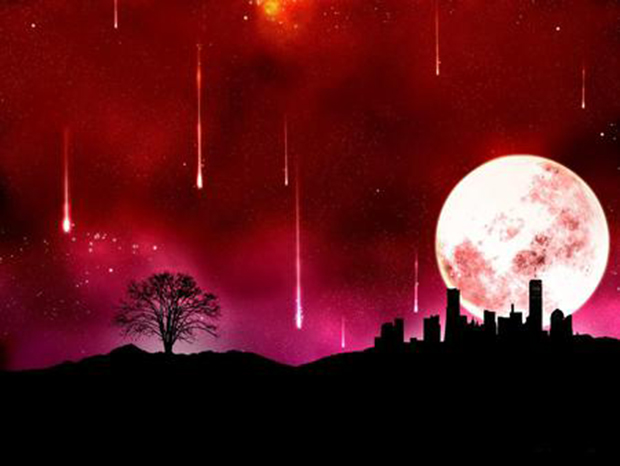 On 22nd October 2016, my wife dreamt she was in certain home getting ready for a wedding with others. She went outside the house and looked up and saw an image forming in the sky.

She described the image as an idol god. This caused her to panic. After the image was fully formed, its’ eyes turned red and it started having fire come from its eyes to the earth like lightning. So, she started running towards the house and telling everyone else to run and go into the house since it wasn’t safe outside. But some people did not take her seriously, even though it appeared everyone could see the fire.

When she went back into the house, it was peaceful and she continued preparing for the wedding. Then the venue changed and they were no longer in the preparatory room, but at the wedding.

The Bible often equates the church to a virgin waiting for the return of her fiancée, who is Christ. At His return, the virgin becomes His bride. (Revelation 19:7-9).

This dream reveals the rise of the antichrist to godship, represented by the image of an idol god forming in the sky. The Bible also reveals the antichrist as a false god, calling him the son of perdition (2 Thessalonians 2:3). Perdition is translated from the Greek word “apoleia” which means “destruction,” which is related to the Greek word Apollo, the name of an ancient greek god!

The fire coming down from the sky like lightning represents how Satan is kicked out of heaven in Revelation 12. He then gives his authority to the antichrist (Revelation 13:2). Christ saw satan fall like lightning (Luke 10:18).

Fire from the sky also reveals the actions of the false prophet described in Revelation 13:11-15. He is called the second beast who rises out of the earth and calls down fire from heaven. He encourages the creation of the image of the first beast (antichrist) and gives breath to the image, so it can speak.

The house represents the only place of safety, which is found in Christ. It reminded me of the ark that was the only place of safety for Noah and his family as the flood caused destruction throughout the earth. The name of Jesus in Hebrew is “Yeshua,” which means “safety” and “salvation”. Jesus is the Prince of peace and in Him we dwell secure no matter the turbulence around us.

We are to prepare for Christ’s return by walking in submission to the Word of God (Ephesians 5:22-27). Are you warning others of the impending catastrophes that are about to fall on earth? Are you getting ready to meet the Lord by living in obedience and fulfilling your assignments from Him? Let’s keep busy for Him and invite others to the marriage supper of the lamb by preaching the gospel. Not everyone will take these warnings and signs serious, but we need to stay focused and play our part.

Jason Mutumba lives and works in Uganda as an engineer. God
has also called him to be a teacher of His Word and to prepare His people
for Christ’s return.

WHOA! I literally had a dream about 3 weeks ago where i was standing in the campus of the school i’ll be attending next month. I and this girl were talking, we both looked up at the sky and we saw TWO suns. I pointed to one of the two suns and shouted: “That’s apollyon!”, the false sun, the false light. This false sun looked identical to the real one. But i KNEW immediately which one was the faker. And not only did i know, but i said it with a smile on my face in the dream. I had zero fear, but rather i was excited.

And Jesus answered and said unto him, Blessed art thou, Simon Barjona: for flesh and blood hath not revealed it unto thee, but my Father which is in heaven. – Matthew 16:17

I believe me smiling in my dream not only denotes my state, but the state of everyone who lays aside their own knowledge and rests in the complete, 100% security of the wisdom of God to reveal the things of heaven to them. Perfect love casts out fear. And currently, this is what i’ve been doing, laying aside all the opinions on interpretation of scripture from people i highly respect, and simply following the liberating anointing of the spirit. It’s scary at first, but THIS is where the freedom is. In The Lord and the Lord alone.

I’ve realized the only reason i’v held on to certain opinions and beliefs about the Lord is because of my fear of rejection from people i respect and highly regard. But now it’s time to be free. It’s time for the opinions of men to vanish away. Hallelujah! thank you Lord!

Thanks to the Lord for giving your wife this dream, and your interpretation of it
Jason. Another of many warnings for those who have ” eyes to see and ears to hear” of what is soon going to happen. Thank you Lord for preparing your people.
Blessings…..

According to Luke 10:18- And he [JESUS] said unto them, I beheld Satan as lightning [BARAQ] fall from [O or U hebrew uses in conjoining two-words] heaven [BAMAH].

Thanks for these additional insights St.Khawnan

Thank-you,
8Next, the fourth angel poured out his bowl on THE SUN, and it was given power to scorch the people with fire.
9And the people were scorched by intense heat, and they cursed the name of God, who had authority over these plagues; yet they did not repent and give Him glory. Rev. 16
Fire is definitely one of God’s judgments.I just posted this verse on FB and said, The fires and floods are peanuts compared to this judgment.”