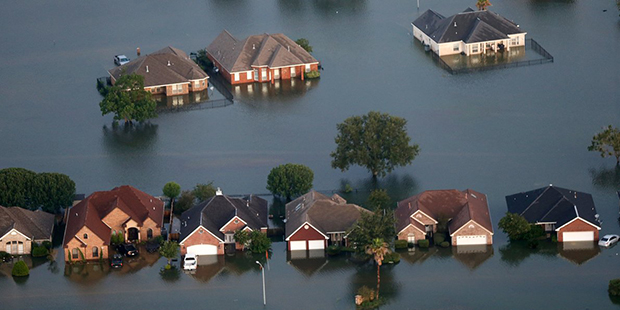 In 2016, Z3er Pamela Banda received a prophetic vision of Houston TX destroyed by flood waters and fire. Although Houston was hit by hurricane Harvey on August 26 2017, that did not completely fulfill everything she saw.

The Holy Spirit told her, “The water represents judgment. Judgment is coming to Houston and it will be destroyed, desolate, and uninhabitable.”

Great destruction came upon Houston and parts of it were destroyed and made temporarily uninhabitable, but Pamela also saw in her vision, “Then the water retracted, but then it came back again with force and strong winds. The water was destroying everything in sight. Cars were being flipped over and everything was catching on fire.”

So it sounds like after the waters of hurricane Harvey retracted, another storm will form and cause not only flooding, but fires too. I received the following email from Z3er Sandra confirming another storm is coming to the Houston area.

God has really been showing me and many others that THE JUDGMENT HAS BEGUN in this nation, especially since the solar eclipse.  He impressed on me strongly on September 13, 2017, that “Everything that is of God will stand. And everything that is NOT of God will fall, with a few exceptions.” (That is, some businesses, marriages, etc. that God did not lead people to do, may survive, if those involved will humble themselves and repent and seek God.)

It’s going to get turbulent for those who have not dealt with things in their lives such as sin, anger, hate, unforgiveness, etc., because if they refuse to deal with them now, those things are going to be exaggerated and become even worse.

The harvest is the filling up of all things people have sown, harbored, etc. – it all comes to a head, both good and bad. We are in a time of judgment, of harvest, a time for all the good and bad, wheat and tares, to come to full maturity, and every struggle to either be resolved and completed, or become more entangled and destroyed.

The TRUTH is being revealed for those who will receive it, but there is also great deception, and for those who refuse the truth, God will allow them to believe the lies.

11 For this reason, God will send upon them a deluding influence so that they will believe what is false,
12 in order that they all may be judged who did not believe the truth, but took pleasure in wickedness. (2 Thessalonians 2:11-12).

God showed me, people will be marked based on choices they make. He will mark each of us spiritually (like in Ezekiel) based on our decisions and actions. Eventually, each of us must choose when the physical mark is offered. God will provide for those who trust in Him, or He will take them home. But God’s people must learn to look to GOD for EVERYTHING, not to man! God’s people must give God the glory, not man! God is a jealous God; He will do what He must do to get what He is due.

On September 15 2017, I had a dream/vision of a hurricane. As I was waking up, I heard the word “deleterious”.  I thought, I don’t use that word, so it must be a new word that God is saying.  I looked it up in the dictionary and found that it was there, and the meaning is “to have an injurious effect”, so I learned a new word.

I also had a dream a few nights ago of another huge hurricane in the Gulf. I believe it is yet to be formed, and is going to mainly hit Victoria, Texas, or between Corpus Christi and Houston.

Sandra’s prophetic warning and dream regarding Houston confirms the prophecy for Houston given to Brother Billy Nelson and another prophecy given to Sadhu Sundar Selvaraj.

Brother Billy described what he saw, “Soon afterwards the storm withdrew, it drug back a massive amount of debris as it returned to sea.” Then he heard the Lord say, “When you see this, it has begun.”

Even so, Sandra’s warning was, “The judgment has begun.” So even though there is more to come, hurricane Harvey appears to have marked the start of a period of judgment that will likely take years to complete.

I had a dream the other night with various scenes that are difficult to recall, but I do remember being at what in my dream was my previous home and out in the back yard flooding was close to but not all the way to the back porch. I was glad it didn’t get into my home.

Few other water related dreams from the past:
March 22 2016
I had a dream of a fish with its tail cut off that I found on my roof under something by the chimney. It was alive and breathing but was close to death. I felt I should pick it up and something told me to get it to water. I picked it up and walked through some areas which I am unsure of their location. On the way to the destination of a lake or natural body of water there were some places to place the fish for a moment to give it a chance to get some oxygen. Finally I got to the body of water and put him in, he was able to breath and his tail grew back, but not as large as the rest of its body. I woke up.

June 4 2016
I was up on a high platform with near vertical slides similar to Der Stuka at Wet’n’Wild. There were several slides of various colors. I think there was blue, green and red. There was also a kid size slide, but I was too big to fit that slide. I think the kids slide was yellow. The only way down was to take the drop. You stand on a floor that opens under you above the slide and you get dropped. I was nervous and wished I could take the small slide but I had no choice but to take the large slide. I believe I was on the red one. Suddenly I dropped before I was ready. I was frightened a bit and had a hard time breathing as water hits you in the face on the way down. I think it let out into a something other than a pool, it may have been a natural body of water such as the ocean. I was up top more than once, I think 3 times and each time I had the same experience. I woke up.

Sept-ish 2016
One involved a black man yelling at me and others like a drill sergeant. I believe we were in some flowing water trying to get to the end of it.

Feb 17 2017
I had a dream with many seeming random scenes. From a vacation house in North Carolina, to watching a movie on an ipad, to working at an office depot that seemed more like a home depot with 3 ring binders and many more that I can not recall. In the dream I was at a beach house in North Carolina and a storm was coming. The owner said it would put the entire house under water. For some reason none of us fled the area but stayed at the house anyway. I recall being right on the ocean.

I wonder why judgment is falling upon the Houston, TX area vs places that seem more ungodly?

Alex, I remember hearing in one post a while back (can’t remember by whom)that Houston has the largest or one of the largest abortion clinics in America and is being judged for that.

It was Pamela Banda who received revelation as to why Houston. Not only it having high abortion rate but it’s known for being the #1 city that sells aborted baby body parts. So not only are they killing babies but they are profiting from them and it grieves the Lord.

Also Houston is the center for prostitution for USA. They were sending people to train in Houston, then sending them out from there to set up other rings. My stepsister works with a ministry that helps people get out of prostitution in Houston area. She told me this. I didn’t know it either.

I’m from Dallas. I lived in Houston five years. I witnessed more crime in Houston in 1 year, than my whole life in Dallas. It doesn’t matter where you live. We lived in a nice part of town. There isn’t a safe area in Houston. Its too bad, if it wasn’t for the crime, it would be a great place to live.

I just saw your comment in passing. And immediately I was reminded of the following scriptures:

I wish this wasn’t true but a couple years ago I had a dream where I was shown my house was flooded 7.5-8 feet deep, to the window above my front door. (I live in Houston. My house did not flood during Harvey nor did the water ever come above the curb.) The water was a murky, greenish-brown but I do not know if it was fresh water or salt water. I remember seeing a cardboard box floating in my kitchen and thinking it had Christmas decorations in it, like it had fallen through from the attic somehow. I wondered what that symbol of the box of Christmas decor meant.

The next year a friend’s son dreamed of a massive, tall ocean wave hitting their house, which is in our neighborhood. We live about 30 miles inland from the ocean. For a wave to hit us here, it would be indescribably catastrophic. Please pray that the Lord will move my family to a place of safety away from Houston where we can work and live modestly until He calls us to gather.

It struck me that the name of the country musical in Nevada, were the awful massacre took place, was the Harvest Festival and that if reports coming out are true, warnings were made prior to the shooting, from a hotel security guard named Jesus.

There is still some time left that another hurricane could hit Houston again this season, as Hurricane season technically doesn’t end until November 1st, and it’s been quite an active season this year. Of course, God can send hurricanes wherever and whenever He pleases, so man-made seasons don’t matter. Still, we shouldn’t rule out that possibility

I agree Abby, hurricane season is not over yet, I remember one that formed last February I believe. If it’s God’s timing then it will happen regardless of the season or what man says.

The Vision given to Kenneth Hagin in 1963 gives an insight into what is happening in US today.
http://www.elijahlist.com/words/display_word.html?ID=18947