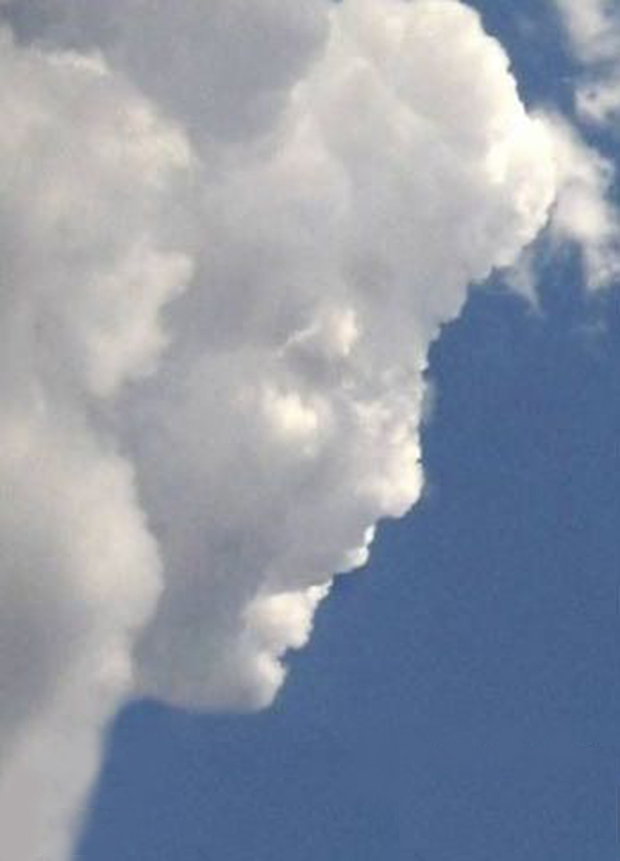 There have been many sightings in the sky in the last couple of years that resemble angels and other forms and the sightings seem to be increasing, but I have not given these a great deal of thought…..until I received a dream on the morning of March 25, 2019, which I believe is prophetic.

In my dream, I saw that society had been enduring difficulties and trials, much more than we see today. I almost got the feeling that there had been previously some type of “taking up” and that a small number of people were missing. My grandmother was with me, even though she died in 2003 at age 105, so I can’t explain that one.

I was standing outside with someone I knew and looking up at a road which was coming down from a hill. Coming down the road were a mixture of people walking and riding in vehicles. Suddenly, I looked up to the sky and clearly saw an absolutely huge form of an angel made of a formation of white clouds, but I knew the appearance of this angel was not by accident, but by design. The details of this angel were exceptionally clear, but what caught my attention the most was the humongous wings and wing spread of this being. The details were so clear, I could even see the outline of the feathers on its’ huge wings. It’s hard to describe just how huge this angel was….much larger than a 757 airplane, perhaps five of them lined up side by side and then added to the top and bottom.

Then this being in the shape of an angel with wings descended over the people on the road.  I then saw the angel open its mouth and tilt its head down towards the people. Then a huge long blast of fiery red flames came from the angel’s mouth and burned up all the people on the road and their vehicles. They ran trying to escape the burning carnage but the vehicles began exploding from the fire, so everyone on that road was burned up.

It reminded me of the two angels at Sodom and Gomorrah who burned up those two cities.

24 Then the Lord rained brimstone and fire on Sodom and Gomorrah, from the Lord out of the heavens.
25 So He overthrew those cities, all the plain, all the inhabitants of the cities, and what grew on the ground. (Genesis 19:24-25 NKJV)

1 “At that time Michael shall stand up, the great prince who stands watch over the sons of your people; and there shall be a time of trouble, such as never was since there was a nation,
even to that time. And at that time your people shall be delivered, every one who is found written in the book.
2 And many of those who sleep in the dust of the earth shall awake, some to everlasting life, some to shame and everlasting contempt.” (Daniel 12:1-2 NKJV)

21 For then there will be great tribulation, such as has not been since the beginning of the world until this time, no, nor ever shall be.
22 And unless those days were shortened, no flesh would be saved; but for the elect’s sake those days will be shortened. (Matthew 24:21-22 NKJV)

9 For God did not appoint us to wrath, but to obtain salvation through our Lord Jesus Christ,
10 who died for us, that whether we wake or sleep, we should live together with Him.
11 Therefore comfort each other and edify one another, just as you also are doing. (1 Thessalonians 5:9-11 NKJV)

24 Then the Lord rained brimstone and fire on Sodom and Gomorrah, from the Lord out of the heavens.
25 So He overthrew those cities, all the plain, all the inhabitants of the cities, and what grew on the ground. (Revelation 8:24-25 NKJV)

13 Then the sixth angel sounded: And I heard a voice from the four horns of the golden altar which is before God,
14 saying to the sixth angel who had the trumpet, “Release the four angels who are bound at the great river Euphrates.”
15 So the four angels, who had been prepared for the hour and day and month and year, were released to kill a third of mankind. (Revelation 9:13-15 NKJV)

The True sin of Sodom, according to Ezekiel 16:49
“Behold, this was the iniquity of your sister Sodom, pride, abundant food, and careless ease were in her and her daughters, but she did not help the poor and the needy.”
(America)

http://www.repentancerevival.com/post/3-days-fasting-and-prayer-for-september
Topics– Fight for your destiny
The Enemy at the Door
God will Restore

I sometimes change the weekend I participate to fit my schedule. Or spread out the time by fasting every other day b/c of my work schedule….
It is scheduled for the last weekend in Sept. If you tell them you are participating they will pray for you. Blessings, m

Psalm 11:6
On the wicked he will rain fiery coals and burning sulfur; a scorching wind will be their lot.