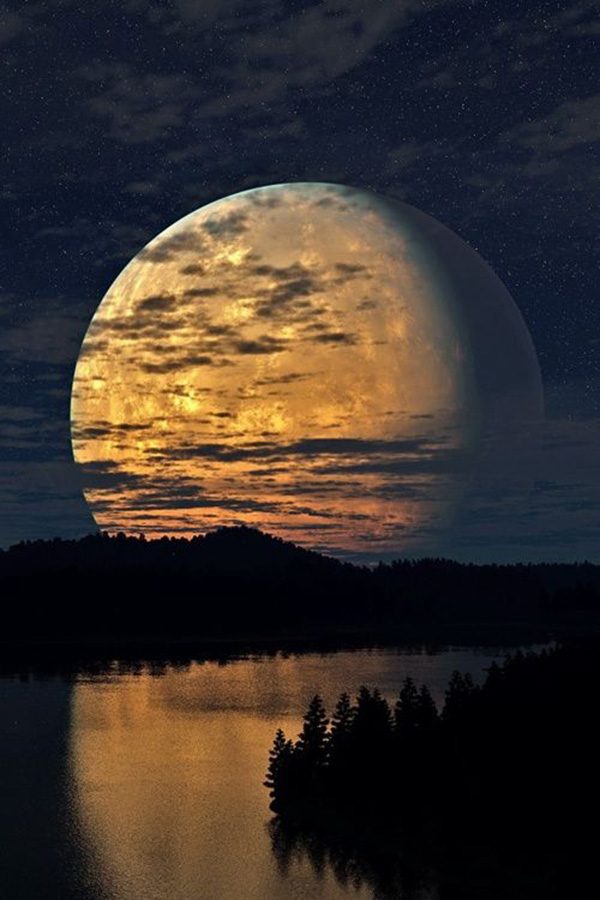 I was walking in a city during the day. It seemed to be near where I live in the province of Quebec, Canada.

I lifted up my eyes and saw a crescent moon, highlighted in a special and unusual way. It was very beautiful and I was in awe. The lighting suddenly began to change multiple times. Halos of light formed around the moon and then the sky went dark.

Then an image was projected in the sky. I saw a full moon projected over the real moon, but like 30 times bigger. It was very awesome and also very frightening to see this huge image in the sky. Everybody could see it. I immediately remembered in my dream the verse that says, ”There will be signs in the sun, moon and stars.” (Luke 21 :25).

The moon then began to transform into a series of other images. 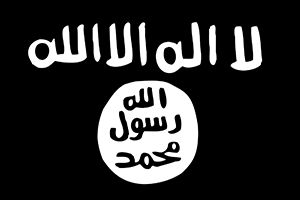 The first one was a flag of ISIS folded into the shape of a turban.

Then I saw the same flag folded into the shape of a turban, but this time the word ”Fatah” was written on it. I remembered having already heard this name, but was not able to remember what it meant until I did research on it after I woke up. Fatah is the Palestinian nationalist political party founded by Yasser Arafat (Source: Wikipedia). The word Fatḥ (Fatah) comes from a reverse acronym of “Palestinian National Liberation Movement.” It means ”opening, conquering or victory.”

Then I saw the ISIS flag again. Then one at a time I saw many different men. I didn’t know who they were, but I received in my spirit they were dictators. One name kept coming to my mind, Muammar Gaddafi. I knew he was a dictator, but it was only after doing some research that I found out he was dictator over Libya.

Then the vision ended and I was now near a beach. I saw military aviation departing in the direction of the sea. I knew that a war had started.

The crescent moon is a symbol of Islam, which uses a lunar calendar and worships Allah, the moon god. Historical evidence shows Allah existed as a pagan deity long before the start of Islam (S0urce: BibleBelievers.org). Even the white circle on the ISIS flag looks like a full moon.

I believe the close connection between Islam and the moon explains why Etienne saw the sky become dark and the moon transform and grow about thirty times larger. The prophet Isaiah saw a time of darkness spreading over earth and covering the nations (Isaiah 60:2). The prophet Daniel saw a time of great distress coming, unlike anything that has ever happened before (Daniel 12:1). Islam is now transforming and expanding throughout the world, far bigger than it has ever been before. Just in the past few years, millions of Middle Eastern Arab Muslims have migrated into other nations and millions more will soon be joining them. Their migration has resulted in a dramatic increase in terrorist incidents throughout the world. I believe this is the beginning of the fulfillment of the following prophecy, which Isaac, the son of Abraham, spoke over his son Esau, the brother of Jacob, whose name was changed to Israel.

“Behold, away from the fertility of the earth shall be your dwelling, and away from the dew of heaven from above. By your sword you shall live, and your brother you shall serve; but it shall come about when you become restless, that you will break his yoke from your neck.” (Genesis 27:39-40)

Esau served his brother Jacob and never saw the curse broken during his lifetime. So, it remained in effect as a generational curse passed down to his descendants. It will continue until the time when they become restless. The Hebrew word rud is translated as restless, but by definition it means “to have dominion, to be lord, to rule.”

Esau married the daughter of Ishmael. The curse upon Esau was passed down to his descendants, which are the Arab people. The spirit of Esau, which is a murderous spirit of hatred for his brother Israel, has been passed on to the Arab people. However, Isaac’s prophecy says the day will come when Esau will break the curse by taking dominion over his brother. For a brief period of 42 months, God will allow the descendants of Esau to take dominion over Israel and over the earth (Revelation 13:5). During that time, they will take possession of Jerusalem under the reign of the Antichrist (Revelation 11:2).

The spirit of Esau is the spirit of Islam. The Arab people today are filled with this spirit, which explains why they are waging jihad, which means struggle. They are struggling to break the curse by taking dominion over their brother Israel and over all non-Muslims. They are now growing restless. They are no longer content to remain in their own lands, but are militantly waging jihad against the nations of the world.

The large moon, which Etienne saw, was awesome and frightening because Islam uses terror and fear to bring people into submission to Sharia Law. In the dream, Etienne remembered the sun, moon, and stars were given as signs. I believe this showed how the rise of Islam is a sign of the end times. It is the fulfillment of ancient prophecies, which must be fulfilled before the Lord returns.

Etienne saw the moon transformed into the flags of ISIS and Fatah folded into the shape of a turban. The Arab people wear turbans on their heads, representing their cultural and religious heritage. I believe the flags were made into turbans to show how they have received and embraced the same spirit and teachings of their fathers and wrapped them tightly around their minds, completely covering their thoughts, which explains why they are militant and dangerous.

The politically correct news media portrays militant Islam as a fringe element, not representative of true Islam, which they claim is a religion of peace. President Obama has repeatedly claimed ISIS is not Islamic, but he is a liar. The truth is Muslims murder and terrorize innocent people because they are taught to do so in their unholy Koran. The more they adhere to the teachings of the Koran, the more murderous they become. Islam means submission (Source: Wikipedia). It is all about bringing the rest of the world into submission, taking dominion by force, which is the opposite of peace.

Etienne saw the flag of ISIS again, but it was followed by dictators from different nations. He recognized one of them was Libya’s former dictator, Muammar Gaddafi. Gadaffi was an Arab nationalist, which means he believed in unifying all Arab people into one nation-state, sharing their common goal of defeating Israel and taking dominion over the world through Islam. He believed Islam and Arabism were “one and indivisible” (Source: Wikipedia). Although he did not live to see his ideology fulfilled, I believe his appearance in Etienne’s vision represents his ideology is still alive and well today.

In modern history, the Arabs have far outnumbered the Jews, but have never succeeded against them because they have been divided against themselves. To succeed, they must come together in unity. In addition to Gaddafi, Etienne saw other dictators united under the banner of ISIS, which was a warning to let us know Gaddafi’s ideology is now arising among many Arab nations who are now coming together in unity to stand with ISIS and Fatah.

Etienne’s vision ended near a beach where he saw military planes departing in the direction of the sea. He knew a war had started. So, putting it all together, God is revealing the secret plans of the leaders of Arab nations who are now unifying under one banner, filled with the spirit of Esau, the spirit of Islam, and making plans to launch a war, which will begin with airstrikes.

Who will they strike? Their enemy is the same one they have always wanted to kill, their brother Israel. They are united in their hatred of Israel, which is the ultimate target of ISIS and Fatah.

Through Etienne’s dream, I believe God is exposing the schemes of the enemy. He is alerting His people because we have an important part to play in these events. The prayers of the righteous can make a big difference in how these events unfold (James 5:16). I believe He is calling on us to pray for Israel during these difficult times. Pray for their protection and for His will to be done there. And pray that the leaders of the United States and Canada stand with Israel.