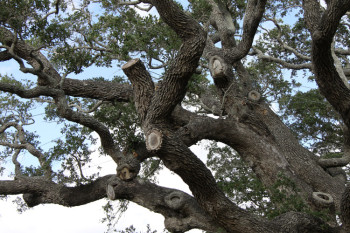 Two weeks ago, I was weeping to the Lord for all the sins in the church because we are not walking in what we were called to do. We are no longer being a light to the world. We are not taking a stand on homosexuality, and we are not protecting the unborn. So I was asking the Lord what he wants me to do and what will happen to the church.

I sensed changes are coming soon, including house churches. Then I had the following dream:

In this dream I saw a tree was being partially chopped down in a house. I did not see the tree, but I knew it was inside the house. The large branches were being chopped down. My husband and I went into the house. We were there to collect the branches and place them in a large wire basket. The wire basket was quite large and could not be carried by just one person. As the logs were being placed in the basket, they all fit neatly in the space and were compact.

My thoughts while the logs were being placed in the basket were that I would not have placed them in there like that. I would have just thrown them in, as they would only have to be stacked up neatly again on the log stack outside.

When we were outside, I looked up and saw a window in an upstairs room.

I then asked my husband, “What are we supposed to do with the logs?”

His response was, “We are to leave them outside until the owner comes.”

The scene changed and I was in another house. The house was full of people. We were having worship. There was a pastor who was praying and prophesying over the people. I did not see his head; only from the neck down was he visible. I believe I know who he is though.

When he came to me he said, “The Lord said to lift your hands.”

When I lifted my hands he said, “The Lord is anointing your hands to heal for miracles, signs and wonders.”

The atmosphere in the room changed, so you could feel the presence of the Lord so strong, so very tangible. Then we saw people who were sick, and healing broke out. When we looked at the people, before we laid hands on them, we knew they were going to be healed.

I believe the time is approaching when we will see many pastors and church leaders taken down and removed from their positions. God will hold them accountable for not bearing fruit. The kinds of fruit they are bearing is not productive, not advancing God’s kingdom. This explains why the basket was placed outside and left there until the owner (Jesus) comes.

“You must consistently beware of the false prophets, who are coming to you in sheep’s clothing, but within they are ravenous wolves. You will recognize people by their fruit. Does anyone gather grapes from thorn bushes or figs from thistles? In this way every good tree produces good fruit, but the rotten tree produces evil fruit. A good tree is not able to produce evil fruit, nor a rotten tree to produce good fruit. Every tree not producing good fruit is cut down and thrown into a fire. Consequently you will indeed know them on account of their fruit.” (Matthew 7:15-20, ONMB*)

Those who have remained faithful and have sought the face of the Lord and not His hand (who have consistently sought Him rather than His miracles and works) will be the ones that see the greater works. John 14:12 says we will do greater works than Jesus did when He walked the earth. We will see the Holy Spirit working through us in such amazing ways. This will not happen in traditional church services held in traditional church buildings. It will be within home churches.

I agree with Nicole’s interpretation, but I believe there is much more within this dream.

The first house Nicole saw in her dream represents the current church in America. The tree represents present and future leadership in the church. The tree was not cut down at the root because this is not about the end of the church. Only the large branches were cut down, which are the pastors who have led their congregations astray.

The smaller branches, which far outnumber the larger ones, are left on the tree because they represent future church pastors – some of whom are already in positions of leadership. They will make the transition or be promoted to fill gaps. There will be innumerable home churches, requiring innumerable leaders. Some of them will travel from one home to another, and others will pastor at only one home. Not all of these leaders will have attended seminary or be credentialed as pastors, but they will be chosen and led by the Lord.

These home churches, by the way, will not all meet in homes. Some will meet in other locations, including the wilderness, in offices, deserted buildings, or any number of places.

Nicole’s thoughts about how she would have just thrown the logs in the basket rather than laying them in neatly reveals that God is a God of order. The logs are laid neatly and compactly in the basket to reinforce that these changes are by God’s own design. The coming events will happen at His direction, carried out by those who are willing and obedient. Nicole and her husband both had the job of collecting and removing the logs because they both hear and obey the Lord.

The wire basket was extremely large, indicating this will be a widespread event across the entire country. The basket itself, a container through which wind easily flows, being made of exceedingly strong wire rather than flimsy reeds or other materials, represents the Holy Spirit, Who will have all this contained just as it should be according to the Father’s plan.

Carrying the logs down the steps indicates that the coming changes in church leadership will not be accomplished in a single day, but will be a process that will take several steps. The stairs are inside the house because these stages will all happen within the Church. God has been shifting leaders and pastors for years and especially in recent times, moving them from one location or position to another, getting some of the leaders prepared and positioned where they need to be for what He will accomplish. The process is now nearer its completion than its beginning.

The window Nicole saw in the upper room allows the light of God to shine on the smaller branches of the tree reaching the future pastors, promoting growth in the new house churches, even penetrating the walls of darkness that will surround them. In His Love, God will protect and provide for his Godly pastors. Adam gave control of the Earth to satan, but God still sets the boundaries beyond which satan cannot go.

The second house represents the home churches that will spring up in response to this cleansing of leadership. Nicole represents believers who will be anointed to operate in the gifts of the Holy Spirit according to what the Lord wants to do (1 Corinthians 12:1-11). But this is also God telling Nicole that He has given her the gifts of supernatural faith and healing for miracles.

Nicole saw they were able to know the sick would be healed. This gift of faith will be widespread. Believers will operate in supernatural faith, which is an inner knowing that God is going to do something supernatural before it happens. It doesn’t rest on our abilities, but on Him.

The leader said to Nicole, “The Lord is anointing your hands to heal for miracles, signs and wonders.” This shows believers will not only administer healing, but healing for miracles, which is another way to say healing plus restoration. Jesus illustrated this when he healed the nine lepers. The disease left all nine, but only one came back to thank Jesus, and he was the only one whom Jesus restored; for him, Jesus performed the additional, creative miracle of restoring his missing body parts (typically fingertips or whole digits, nose, ears, etc.) that had been eaten away by the disease (Luke 17:12-19). These kinds of miracles will be performed through God’s people and will cause many to come to the Lord (John 2:23, 4:48).

============
*ONMB = One New Man Bible: Revealing Jewish Roots and Power is a fresh edit of the Hebrew Scriptures and a new translation of the Greek. It was written by William J. Morford, who studied Hebrew under Rabbi Eliezer Ben-Yehuda, grandson of the Eliezer Ben-Yehuda whose lifetime work brought the Hebrew language alive as the national language of Israel. I believe Rev. Morford has a degree in Greek studies.

Nicole Moore is a devoted Christian, mother, and church member. She devotes herself to prayer and fasting and receives prophetic dreams from the Lord.

I have been a Christian 36 years now all in Pentecostal churches I do not criticise prophets , etc, says to believe in the prophets that you may prosper as 2 Chronicles 20v20 states .The false ones God will judge and unrepentant ones will not inherit heaven.

Linda, I see the judgment is not just for False apostles etc., but also for ones who began well but finished poorly if they are unrepentant. See Jeremiah 18:7-17.

Thank you for sharing this post. I also had a dream on 7-26-15, where the warning was judgment coming to the false apostles, prophets, pasters, teachers and evangelists. The judgement will be suddenly.