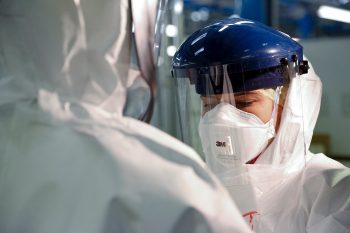 In this 15:25 Minute Video, Beverly from the Church in the Wilderness, entitled, “ Dream Government Home Invasions to Enforce Quarantine”, she shares that she was shown that people in contamination suits will be assigned to enter people’s home to enforce a quarantine. We must be MERCIFUL people to those who harm us (I.e. the people entering our homes to enforce quarantine on us).

In this video, she references another dream linked to this dream, entitled, “Donald Trump bringing INSECURITY to U.S. Saying Peace, Peace; when there is NO PEACE”.

1 Thessalonians 5:3-4
3 For when they shall say, Peace and safety; then sudden destruction cometh upon them, as travail upon a woman with child; and they shall not escape.

4 But ye, brethren, are not in darkness, that that day should overtake you as a thief.

14 They have healed also the hurt of the daughter of my people slightly, saying, Peace, peace; when there is no peace.

15 Were they ashamed when they had committed abomination? nay, they were not at all ashamed, neither could they blush: therefore they shall fall among them that fall: at the time that I visit them they shall be cast down, saith the Lord.

Things are not as they seem. Press into God for discernment.

I have watched another self-media YouTube. The author is saying that more viruses may be released after DT win the election. Time to prepare is running out.

When I was listening to this video, right before she said something about the demons opening a door, I saw a flash of Bill Gates in a choir robe, shutting a door. Right when she said Hazbet suits, I was reminded how I had a dream two nights ago about a young girl who is a childhood friend of my daughter’s who does research for a Biotech company.. She was outside, all alone, in the cold, while other people were partying in the house. I am wondering if this means the vaccine efforts can be thwarted by our prayers and mercy on Bill Gates?

No, I don’t think so, Carolanne. Not at all.

It could be she exposed something and now is on the “outside “ looking in. Beverly had a noon prayer on 1/06 where she explained that Satan does not want us to stand alone. He sends thoughts our way to get us to want to go with the crowd. She also was shown the narrow way in a dream one time. It looked like an unmarked pathway with leaves partially covering it. The Lord reminds us in His word that there will be an unnumbered amount of worshipers before his throne. So even if we do not feel like there are others standing alone,,we know they exist. Blessings!!

I was just going. To send this to you. The part about mercy for all was convicting. I like her bravery in the dreams. It gives me courage as I ponder what I would do . Go God!!!